Seemingly unwilling to leave 2020’s habits in the past, the dairy markets began 2021 on a volatile note. Monday’s announcement that the USDA is extending its Farmers to Families Food Box Program spurred dairy commodity prices upward, with all products seeing gains during Tuesday’s spot session. The International Dairy Foods Association estimates that this installment of the program will designate $300 million for dairy purchases, spread across fluid milk, cheese, butter, and soft products. Once contracts are awarded at the end of this month, deliveries should commence and continue through April. 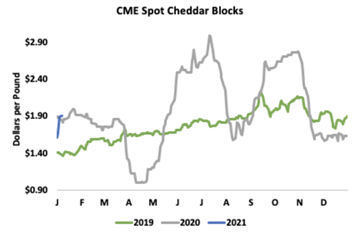 CME spot Cheddar blocks received perhaps the greatest boost from the news. Blocks added 26.75¢ over the course of the week, closing Friday’s session at $1.9175/lb. Cheddar barrels also gained some ground, with prices rising by a more modest 11¢ since last Friday to finish the week at $1.6525/lb. Not only were prices on the move, but volumes were also active with 36 loads of each barrels and blocks trading hands over the course of the week. Spot market strength inspired gains in the futures market where JAN through APR Class III contracts saw increases every day of the week, except Monday. 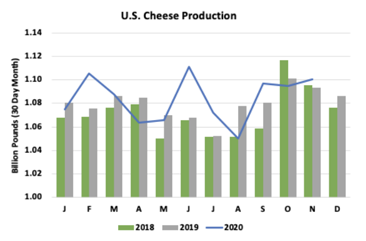 The USDA Dairy Products report released on Wednesday showed that Cheddar production was strong in November, due in part to new manufacturing capacity coming online in the Upper Midwest. Cheddar output was up by 3.7% year over year, totaling 320.7 million pounds for the month. Even though only cheese between 4 and 30 days old may be sold at the CME, this week’s spot price gains are even more impressive against the backdrop of abundant production. Plentiful American cheese production compensated for weak mozzarella output, which was down by 3.3% versus November 2019. At 1.1 billion pounds, total cheese production for the month was up 0.6% year over year. 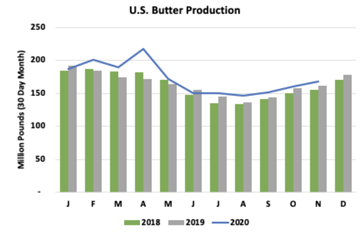 The Dairy Products report also pointed to robust butter production, continuing the trend seen in recent months. Plentiful cream supplies were routed into churns and resulted in the manufacture of 168.3 million pounds of butter in November, an increase of 4.0% compared to the same month last year. Even as demand for dairy fats remains remarkably steady at both the foodservice and retail level, much of this butter is finding its way into storage. Heavy inventories are weighing on prices. While spot butter got a bump from the USDA announcement on Tuesday, this gain was erased by the end of the week. CME spot butter finished the week at $1.38/lb., down 4¢ since last week. 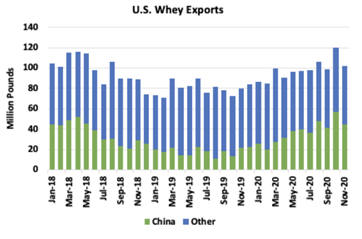 Aggressive butter manufacturing has also resulted in plentiful skim availability for dryers. However, despite copioussupply, demand from both international and domestic sources has been sufficient to push prices modestly higher. During November, production of nonfat dry milk and skim milk powder rose by 8.9% year over year to 206 million pounds. For most of the year, sustained export demand, especially from Asia, has prevented inventories from building to worrisome levels. U.S. NDM exports were slightly softer in November, falling by 7.8% year over year, due principally to reduced shipment to destinations such as the Philippines and Vietnam. However, market participants indicate that renewed export interest has once again quelled concerns and was a contributing factor to the increase in spot NDM prices seen at the CME this week. Spot NDM rose by 4.75¢ to finish the week at $1.19/lb.

Weakness in the butter market collided with strength in the nonfat dry milk market to leave Class IV futures markets largely stable over the course of the week. Most nearby contracts gained a little bit of ground in the wake of the USDA announcement, but the gains were modest. 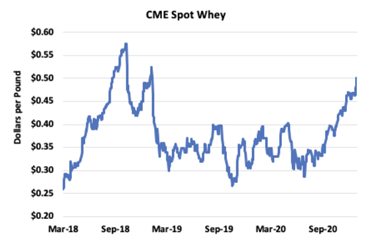 Whey markets continue their impressive rally, with the spot whey price rising to $0.50/lb. on Thursday and holding steady on Friday. Whey prices have not breached 50¢ since early 2019. Export demand has played a key role in keeping tension on these markets. November U.S. whey exports rose by 27.9% year over year, mostly due to China’s persistent appetite for U.S. product. Traders indicate that inventories are light and market fundamentals are aligning to keep upward price pressure on the whey market in the coming weeks.

Rising grain prices are continuing to stress producer economics with feed prices hitting levels not seen in several years. Persistent concerns about grain availability in South America, exacerbated by Argentina’s decision to suspend corn exports until March, has only intensified these worries. After rising convincingly during the first half of the week, nearly all 2021 soybean and corn futures contracts took a brief respite on Thursday before continuing their upward campaign on Friday. The market anxiously awaits USDA’s World Agricultural Supply and Demand Estimates report which will be released next Tuesday and should provide additional information on the state of global grain supply and demand.