With a sense of normalcy restored, and the spring flush rapidly approaching, milk is still plentiful and has resulted in copious dairy product production.

If there were any doubts about China’s appetite for dairy products, these were put to rest on Tuesday with an eye-popping result at the day’s Global Dairy Trade (GDT) auction. Driven principally by aggressive bids from Chinese buyers, the GDT index soared by 15.0% – the eighth consecutive increase and the largest gain in a single session since September 2015. Whole milk powder saw the largest increase, with prices galloping upward by 21.0% versus the prior event. Seemingly insatiable demand for fats pulled the price for anhydrous milkfat and butter up by 7.4% and 13.7%, respectively. Even with gains at the CME this week, spot butter in the U.S. maintains nearly a 90¢ discount to the GDT price after adjusting for fat content.

Back in the United States, many of the complications caused by February’s inclement weather have largely been overcome, with manufacturers and haulers reporting that a sense of balance has nearly been achieved. Though more accurate figures will continue to surface in the coming weeks, USDA’s Dairy Market News quotes that estimates of the milk lost during the cold spell may be as high as millions of pounds. However, with a sense of normalcy restored, and the spring flush rapidly approaching, milk is still plentiful. Abundant milk has resulted in copious dairy product production as seen in USDA’s Dairy Products report released on Thursday.

According to the Dairy Products report, a total of 1.117 billion pounds of cheese was produced in January, the largest amount ever for the month and an increase of 0.5% year-over-year. Manufacturers continued to opt for products that could be used in ageing programs, pushing the production of American style cheeses, and especially Cheddar, upward. January output of Cheddar cheese jumped by 5.7% year-year over year to 337.6 million pounds while Mozzarella production slipped by 1.9% versus January 2020. 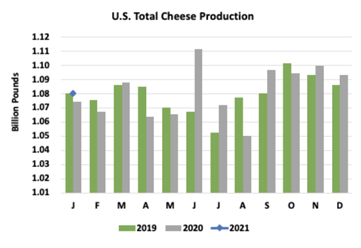 Robust cheese production has persisted into recent weeks as manufacturers continue to report busy production schedules. Spot milk remains readily available, and manufacturers can pick up these loads at comparable discounts to those seen in recent weeks. Nevertheless, some cues may be emerging that the market is firming. Domestic demand appears to be improving as Covid-19 restrictions are rolled back and vaccination campaigns progress. This cautious optimism likely helped to support gains at the CME this week as spot Cheddar blocks saw prices move steadily upward over the course of the week. By Friday spot Cheddar blocks reached $1.7325/lb. an increase of 11.5¢ versus last week. Barrels began the week unchanged before finding some traction on Thursday and Friday, adding 8.75¢ over the week to close Friday’s session at $1.5075/lb. 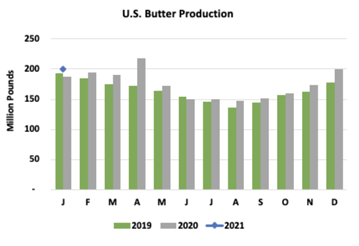 If cheese vats were busy in January, the butter churns were even more so. Butter production for the month increased by 7.0% year-over-year to 206.9 million pounds – record production for the month of January. Butter exports were also strong during the month, rising by 81.9% year-over-year to 6.2 million pounds. In the first week of trading for new crop butter, and emboldened by the aggressive GDT result, spot butter prices bounded upward early in the week, adding 24.5¢ between Monday and Tuesday to reach $1.715/lb. on Tuesday, the highest price since July. The price was coaxed 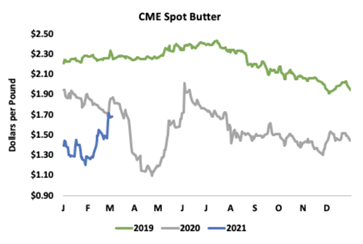 down on Wednesday and Thursday before rebounding on Friday, ultimately ending the week at $1.69/lb. Even as the spot butter price ended this week 22¢ higher than prior week, it nevertheless maintains a significant discount to global competitors.

Ample butter production resulted in lots of condensed skim for dryers in January as production of nonfat dry milk (NDM) also set a January record of 196.9 million pounds, an increase of 11.7% compared to the same month prior year. Despite sustained international interest, skim milk powder production declined 8.0% year-over-year to 36.9 million pounds during the month. Demand has been active from both domestic and international sources which has helped to put modest upward pressure on prices. Despite a dip during Wednesday’s trade, spot NDM prices 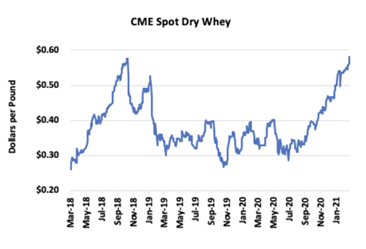 Continuing the trend seen over the last few weeks, whey markets once again belonged to the bulls as spot prices moved up to 58¢/lb. on Thursday, the highest price ever since the spot market began trading in 2018. Even though cheese production is active, a preference for the production of whey permeate, whey protein concentrates (WPC), and whey protein isolates has limited the availability of dry whey. USDA’s Dairy Products report showed that in January while dry whey production for both human and 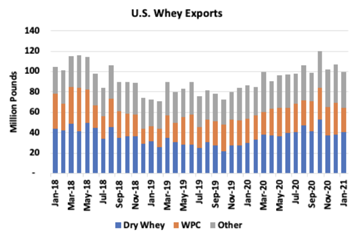 animal use slipped by 0.4% year-over-year, output of WPC and WPI increased by 6.6% and 11.8%, respectively. Export demand also continues to surge with January whey exports rising 34.4% year-over-year to 40.3 million pounds, anchored by strong demand from Southeast Asia.

Milk futures rode the spot market gains, moving upwards during the week. Class III milk futures found the most traction on Tuesday and Wednesday before most nearby contracts retreated slightly on Thursday and Friday. Nevertheless, the MAY21 through NOV21 Class III contracts settled on Friday above $18/cwt. Nearby Class IV contracts also moved upward, buoyed by the spot butter and GDT rally early in the week.

High feed costs continue to cast a shadow over dairy producer profitability. Dairy ration costs as calculated by the Dairy Margin Coverage program rocketed up to $10.36/cwt. in January, an increase of 64¢/cwt. versus December and the highest value since the program calculations began to be published in 2019. Rising corn and soybean prices are the culprit for the increase. In USDA’s Agricultural Prices report, released last week, corn and soybean prices were raised to $4.24/bu. and $10.90/bu., respectively, the highest prices for these commodities since 2014.

US-China tariffs: Who stands to be hurt?

Beijing has said it will swiftly retaliate against American exporters By imposing tariffs on $200 billion more in Chinese goods starting next week, President Donald Trump has intensified his trade war with Beijing and triggered [Read More …]

The USDA’s Economic Research Service (ERS) has released its first production data summaries for 2017 in California, with a total for the year of $50.13 billion, an increase of $3.7 billion from 2016, or six [Read More …]