Even with a short week, there was no lack of action in the dairy markets. However, the market took the news poorly with most dairy commodities moving decisively downward.

It may have been a short week, but that didn’t mean there was a lack of action in the dairy markets. On Tuesday evening, the USDA surprised markets by announcing the awarded contracts for the fifth round of the agency’s Food Box program. Of the $1.5 billion authorized for the round, USDA elected to issue awards totaling just $354.5 million. Stakeholders believe that USDA will make further awards in the future, once the successful vendors have proven they are up to the logistical challenge of providing the boxes. In the meantime, however, the market took the news poorly with most dairy commodities moving decisively downward. 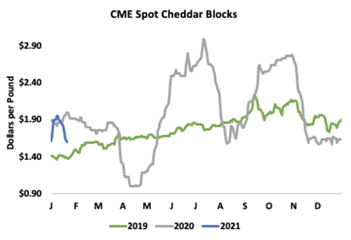 USDA’s announcement weighed heavily on the cheese market, in particular. After opening the week on an already softer note, blocks and barrels gave up 7¢ and 12¢ respectively during Wednesday’s CME spot session, the first session following the USDA announcement. Blocks continued to slide through the course of the week and ultimately finished Friday’s session at $1.61/lb., a full 22¢ lower than the prior week. During an active week in which 28 loads traded hands, barrels gave up 18¢ as they made their way down to $1.39/lb. on Thursday. Though barrels recovered a quarter cent on Friday, they remain at levels not seen since August of last year. Lethargic demand from foodservice channels continues to press down on the cheese market, even as retail demand for cheese remains strong in 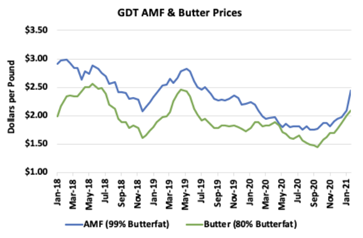 most corners of the country. Hefty inventories are beginning to generate some concerns throughout the market, especially after the prospect of eliminating some of these stocks through the Food Box program has dimmed.

The butter market was on the move this week, opening Tuesday’s spot session with an unexpected 11.5¢ rise to put butter back above $1.40/lb. After seesawing through the remainder of the week, butter closed Friday’s spot session at $1.4025/lb. The market rally was surprising considering market commentary suggesting that churning is active and butter inventories are bordering on excessive. 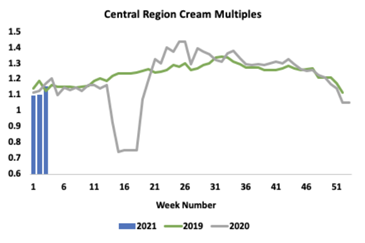 Market participants continue to note that cream is plentiful, though multiples have managed to find some firmness over the last few weeks, possibly emboldened by a pick-up in retail and export interest.

While fat appears to be plentiful in the United States, an important rally at this week’s Global Dairy Trade (GDT) auction suggests that the international market is quite a bit tighter. Butter and anhydrous milkfat saw increases of 4.6% and 17.2%, respectively, during Tuesday’s trading event. After adjusting for butterfat content, the GDT butter price sits at nearly a 70¢ premium to the CME spot market, suggesting that U.S. product could be quite competitive abroad. Both skim milk powder and whole milk powder also posted gains at the auction. 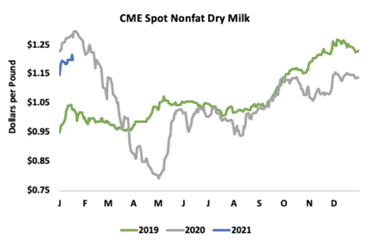 Condensed skim is readily available for dryers and while robust export interest has kept some tension within the nonfat dry milk (NDM) markets, the situation may be evolving. Stocks are rising with no production slowdown in sight. After gaining a penny and a half in Tuesday’s spot session, NDM prices weakened over the rest of the week, ultimately finishing Friday’s session at $1.1725/lb., 2.75¢ weaker than last Friday. After beginning the week with all contracts except JAN21 moving upward, NDM futures spent the rest of the week in the red with all nearby contracts losing at least a few cents per pound by Friday. The spot trade was active with 33 loads moving during the week. 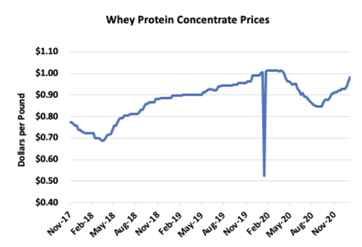 The whey market rally continues with spot whey prices steadily gaining ground. By Thursday CME spot whey prices were up to 54¢/lb. and while they still have a few cents to go to break the prior record of 57.5¢/lb. set in late 2018, market participants indicate that the tone remains bullish. Demand from both international and domestic sources is robust, although logistical issues related to container shortages are causing some problems for exporters in the western United States. Increased demand for higher protein whey products like whey protein concentrates and isolates is also diverting the whey stream away from dry whey production, helping to keep the market in balance, despite strong production.

Class III futures took big hits early in the week, both on the USDA announcement and as they sought parity with the spot market. The FEB21 Class III contract settled limit down on Tuesday, while MAR though MAY contracts gave up at least a quarter the same day. The slide continued until Friday when some modest gains were made. Nevertheless, the FEB21 Class III contract ended the week 14.4% lower than last Friday’s settlement. Class IV futures were more mixed, influenced by the volatility in the butter and NDM markets. Nevertheless, most nearby contracts lost value over the course of the week.

Stakeholders anxiously await the publication of USDA’s Milk Production report on Monday, which will indicate how U.S. milk production fared in the final month of 2020. In the meantime, producers are generally reporting strong milk output with improving yields and strong component values. A generally mild winter has helped to support production volumes across most of the country. Class I

demand is stable to lower, particularly due to reduced orders from institutions such as schools.

The grains futures markets relaxed this week, easing off of the highs ignited by last week’s World Agricultural Supply and Demand Estimates report. Nearby corn futures contracts lost ground for most of the week and by Friday’s settlement, only the JAN21 and FEB21 contracts remained above $5/bu. Soybeans behaved similarly, sliding downward until only JAN21 and FEB21 remained north of $13/bu. on Friday. Despite the easing, feed costs are still expected to stay high and will be an important consideration for producers through the coming months.

The USDA’s Natural Resources Conservation Service today announced funding to Newtrient through the Conservation Innovation Grant (CIG) program to evaluate fifteen technologies and practices across the country over the next three years. One of the [Read More …]