Many dairymen in California have been anticipating a boost in prices with the new Federal Milk Market Order Area.  Likely not much of a boost, so your genetic plan may need to: 1) Rethink your culling, and 2) Look for the most immediate results.

Be aggressive in culling cows that are not profitable; or won’t likely be profitable until they calve again.  I would suggest starting with the late lactation cows.  They’re probably over conditioned and their feed efficiency is probably less than 1.5.  Many commercial dairymen are now thinking their cows are too big, and they may very well be.  Body condition score is also important and your thinking regarding size should also include weight.  Your most profitable producers are often the medium sized cows with lower body condition scores that are efficiently converting nutrients to milk.

First, it would be ideal if feed efficiency could be more easily estimated on an individual cow basis.  Factors that affect feed efficiency include: a) Body size (likely weight more than stature). b) forages, which are a large portion of the ration and are slower to digest. Rumination monitoring could be a key to improving feed efficiency.  However, there’s a balance between rumination and production.  More rumination means higher fat and protein percent, less rumination means higher milk production. The example below shows a herd of both Jerseys and Holsteins, with the early part of the chart possibly being too low and the late part of the chart being too high.  Be cautious, it’s likely better to get a bit less milk if the milk has more solids than risking sick cows that are not ruminating enough. (**Possible ways to improve genetic evaluations for feed efficiency would be to include body condition scores and rumination) 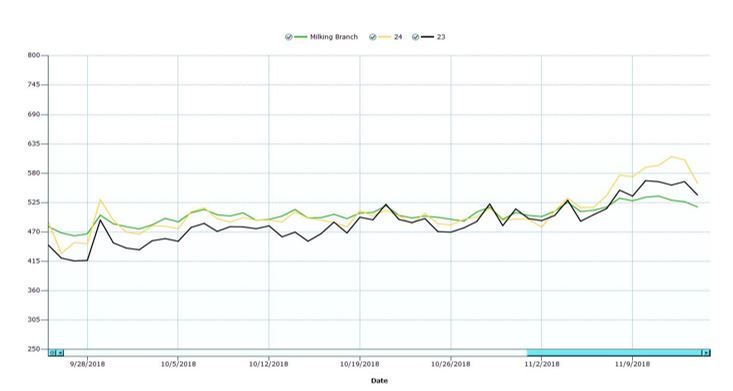 Second, use energy correct milk (ECM).  ECM = (12.82 X fat pounds) + (7.13 X protein pounds) + (0.328 X milk pounds) (Tyrrell and Reid, 1965).  ECM more closely aligns with the Federal Milk Market Order which uses a percent fat and protein above or below the base price in determining your price for the milk you produce.  You should be able to ask the computer software program rep to change this on your computer.  Use ECM rather than fat corrected milk (FCM).  Fat and protein percent are even more important when milk prices are low; the base price is generally lowered more than the bonuses you get for fat and protein.

Third, heritability (h2) should be considered.  Fat and protein percent are higher heritability than many of the other traits and should be looked at closely.  Other traits like health traits and feed efficiency are lower in heritability.  Genomic testing has made a big improvement in accuracy of PTAs.  More practically, a PTA fat % of +0.2 is more accurate with genomic testing, along with the conventional daughter proof.  A heritability of .5 represents the percent that comes from genetic, also important but not the same as accuracy for a given PTA.  Genomic evaluations have made a big improvement in accuracy for pregnancy rate and health trait estimates, but the heritability is still lower than fat and protein pounds and percent.  And, recent research suggests heritability for pregnancy rates may be higher than our current heritability suggest. Somatic Cell Count directly affects you milk check.  However, since it’s greatly affected by environment, heritability estimates are lower.

In my opinion, lots of improvements can be made in estimating Feed Efficiency on an individual cow basis.  For now, the heritability estimates are low.  Body Condition Score and rumination have already been mentioned.  Individual cow estimates are difficult, but there’s more data that could be used in the future for feed efficiency.  Identifying quantitative trait loci (QTL), the DGAT1 gene is a good example. It’s likely an important QTL for milk fat yield and content.  Other QTLs have been identified that affect somatic cell count, milk fat, protein, lactose, and yield.  QTLs added to the single nucleotide polymorphism (SNP) evaluations now used for genomic estimates may improve genomic estimates even more.

Fourth, cull heifers earlier; they’re likely costing you money to raise.  This may be the best place to use genomic testing, especially with health traits.  Two problems, a) You don’t know exactly how many heifers you’ll need for replacements.  You should be able to make a good estimate. b) Does it make good sense to genomic test young heifers that are only going to be culled.  My thinking is that it does; but be cautious.  There’s lots of calculations that suggest you can justify genomic testing.  If possible, get a second opinion from someone who knows your herd.  If your herd struggles with low fat or protein percent (higher h2) look at that more critically. But also look at somatic cell count or pregnancy rate which are a part of genetic indexes.  And remember, indexes are calculated for the average dairy, not for your dairy.

John Ellsworth on Re-inventing Your Future

Does the name Coco Chanel ring a bell for you? Your Mom probably used her products when you were growing up. I know my Mom did. Coco Chanel was a French entrepreneur who founded the [Read More …]