After the enthusiasm ignited by last week’s USDA announcement, most commodities struggled to keep the momentum going. Weighed down by plentiful supply, the butter and cheese markets both finished the week on a softer note while dry products, and especially whey, fared somewhat better. Reports from most milksheds

indicate that milk production is more than sufficient to meet needs, motivating manufacturers, and especially balancers, to run hard to absorb excess volumes. Spot milk is ample, and market participants comment that discounts are required to move loads. 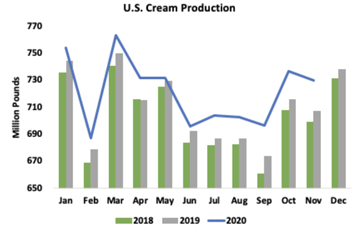 Cream is readily available across the country and churns are active. But with foodservice demand still lethargic, much of this butter is being routed to storage and exacerbating concerns about an inventory hangover. Butter stocks are seasonally higher than they have been in decades and have likely had a hand in driving the CME spot butter price lower this week. After dropping 7¢ during Monday’s session the spot butter price continued to slide until hitting $1.2875/lb. on Wednesday, the lowest price since May. Even after a modest rebound on Thursday, another decline on Friday left the spot price at $1.29/lb., 9¢ lower than last week. 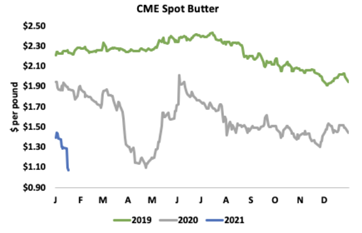 Even though condensed skim is also abundant, and dryers have been going full tilt, the nonfat dry milk (NDM) market has been able to stand its ground. Despite giving up 5¢ on Monday, gradual gains during the balance of the week propelled the CME spot NDM price to $1.20/lb., up a penny from the prior Friday. The trade was active, with 43 loads cumulatively changing hands over the course of the week. While domestic demand for NDM has been mixed, robust draw from the export market has kept product moving and inventories in check. According to traders, the booking of export sales through the first quarter has been active. This includes shipments to Mexico, which has demonstrated only tepid demand in recent months. 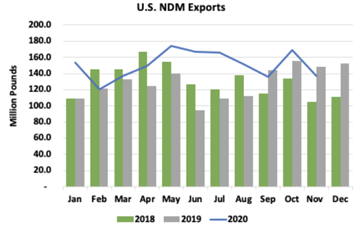 Spot cheese markets also finished the week decisively lower. Though Cheddar blocks made an effort to continue last week’s upward trajectory by adding a nickel during Monday’s spot session, the effort was short-lived. By Tuesday, block prices began to slide, capping off the week with a 7¢ drop to end Friday’s session at $1.83/lb. Barrels mounted a less dramatic campaign, finishing the week down by 8¢. Manufacturers report that while cheese production has picked up since the holidays, renewed concerns about 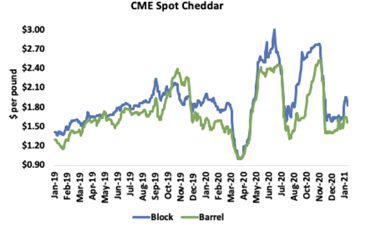 demand in both the foodservice and retail channels is likely to continue weighing on prices.

If the bulls were taking respite any corner of the dairy complex, however, it would be with whey. Whey prices continue to rise, spurred on by healthy demand from both domestic and international buyers. After stair stepping up over the course of the week, spot whey prices closed Friday’s session at 53¢/lb., up 3¢ versus last week and the highest price seen since October 2018. Price increases among higher protein whey products is increasingly coaxing the whey stream toward these uses, which is also helping to keep dry whey stocks in check. 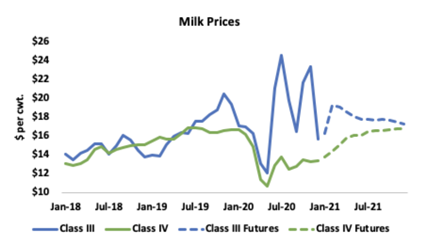 Milk futures markets posted mixed performance as weaker cheese and butter prices collided with stronger NDM and whey values. Spot cheese declines weighed heavily on nearby Class III futures contracts early in the week and even some recovery on Thursday and Friday could not erase these losses. Ultimately, the JAN through MAR Class III futures contracts gave up ground over the course of the week. Class IV futures were similarly turbulent with early week losses counteracted by gains on Thursday, ushered in by the pop in spot butter prices. However, while the JAN Class IV contract still gave up 7¢ between Monday and Friday, all the remaining 2021 contracts were able to end in positive territory.

Released by USDA on Tuesday, a surprising World Agricultural Supply and Demand Estimates report led to some dramatic increases in the grain markets. Most notably, USDA made a harsh downward revision to the expectation for the corn yields during the 2020/2021 marketing year. Combined with reduced acreage, this reduced total estimated supply by 400 million bushels. Though adjustments were also made on the demand side, including lower ethanol use and lighter exports, ending stocks have been reduced significantly. These changes pushed MAR through JUL corn futures above $5/bu. Soybeans also saw total supply revised downward at the hand of lower yields, albeit by a more modest 14 million bushels. Concerns persist about the availability of soybeans in the Southern Hemisphere, with USDA reducing Argentina’s expected soybean production for the year by 4.0%. The news pushed nearby soybean futures north of $14/bu. These increases are likely to contribute to even higher feed costs for dairy producers that have already seen margins squeezed by rising operating costs in recent months.

The T.C. Jacoby Weekly Market Report Week Ending October 30, 2020 Trading volumes were light, but that led to a sense of foreboding. The rally is real, but how long can it last? The futures [Read More …]

The T.C. Jacoby Weekly Market Report Week Ending February 28, 2020 The bulls nearly drowned in a flood of red ink this week. The markets were swamped in wave after wave of selling due to [Read More …]

Cheese is not a part of the traditional Asian diet. By global standards, Asian per-capita consumption of cheese is low, with plenty of headroom for growth. And, as the competitive environment intensifies, Australia must continue [Read More …]