The Purdue University/CME Group Ag Economy Barometer November reading was 134, a decline of just over 1 percent from a month earlier when the barometer stood at 136. The November reading leaves the barometer 6 percent below its most recent peak, which was reached back in June before the impact of trade disruptions were felt throughout much of U.S. agriculture. Although November’s ag sentiment index was below the level attained last spring, it was still 6 points higher than a year earlier when the index of agricultural producer sentiment was 128. 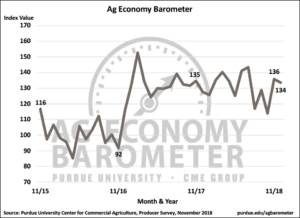 The modest decline in this month’s barometer reading occurred because producers view of future conditions weakened slightly as the Index of Future Expectations was 143 compared to 146 in October. Even with this month’s modest decline, the Future Expectations Index remains well above its September reading and very near its spring peak, indicating producers still have a relatively optimistic view of the future. The Index of Current Conditions at 115 was unchanged compared to October. Unlike the Future Expectations Index, the November reading of the Current Conditions Index was still well below its late spring peak, when the index topped out at 138. 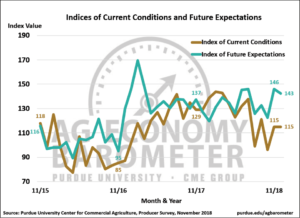 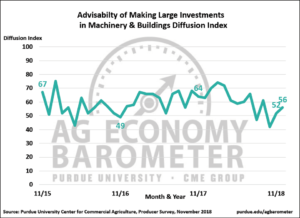 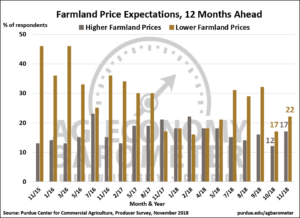 Evidence of farmers more favorable attitude towards farmland values in November was even more pronounced when we asked farmers for their longer-run (5-year) perspective. The percentage of farmers expecting farmland values to move higher over the next five years plummeted from 46 percent in September to 21 percent in October. But in November, this percentage rebounded back to 50 percent, which is near the upper end of the range of responses we’ve received to this question since we first posed it in May 2017. The shift in producers’ attitudes was largely the product of producers shifting from expecting higher farmland values to expecting values to remain the same (on the October survey) and then back to expecting higher farmland values from expecting values to remain the same (on the November survey). Additionally, in November the percentage of producers expecting lower farmland values in five years dropped to 9 percent compared to 23 percent in October, which was only the second time this percentage fell below 10 percent since we first posed this question. Despite the improvement in long-term optimism regarding large investments in machinery, buildings, and farmland, there remains an undercurrent of concern about the farm economy among producers. For example, the percentage of producers expecting profitability to improve has changed little in recent months, with only 13 percent of respondents in November indicating that they think farm profitability will improve in the next 12 months. Moreover, when we asked whether they expect farmers’ equity position to improve in the upcoming year, just 8 percent of respondents said they expect farmers equity position to improve and 44 percent said they expect to see farmers’ equity position diminish. 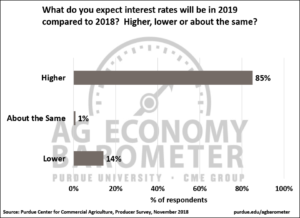 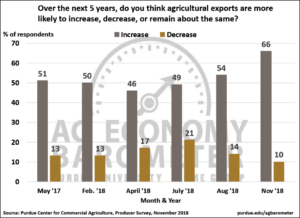 Figure 6. Agricultural producers’ expectations for agricultural exports over the next 5 years, May 2017-November 2018. 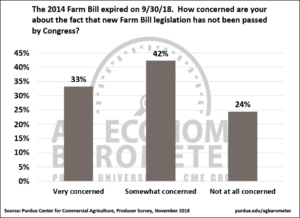 The Ag Economy Barometer in November declined just over 1 percent compared to a month earlier, the result of a modest weakening in producers view of future economic conditions. However, even with this month’s modest decline, the Future Expectations Index remains well above its September level and actually is close to its spring peak, indicating producers still have a relatively optimistic view of the future. Producers took a somewhat more favorable view of making large investments in their farming operation this month and also were more positive about future farmland values, especially when looking ahead five years. However, there remains an undercurrent of concern about the farm economy from producers as only 13 percent of producers expect farm profitability to increase in the upcoming year and only 8 percent expect farmers’ equity position to improve in the next 12 months.

Looking ahead, farmers overwhelmingly expect to face higher interest rates in both the short-term (next 12 months) and longer term (next five years). Thirty percent of soybean growers said they plan to reduce soybean acreage in 2019, up from 19 percent that planned to reduce their acreage just one month earlier. Growers indicating they will reduce soybean acreage intend to make a significant cut as 69 percent of respondents said they would reduce their acreage by more than 10 percent. Finally, producers expressed concern about Congress’ failure to pass a new Farm Bill to replace the expired 2014 Farm Bill. Three-fourths of farmers in our survey were either somewhat or very concerned about the lack of a new Farm Bill with 33 percent of them indicating they were very concerned.

State Agriculture Commissioner Richard A. Ball comments on the farm bill I am encouraged to see that we have been able to come together with a multi-year, comprehensive farm and nutrition package that will benefit [Read More …]