Consumers continue to reach for kitchen staples that are familiar and convenient, and Cheddar fits the bill. 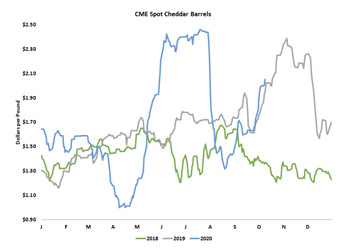 It was another big week for barrels in Chicago. They added a dime and reached $2.055 per pound. Barrels have moved lower just once in the past 20 trading sessions, and have advanced 46ȼ in the past month, a formidable 29% gain. Blocks climbed too, but with a little less gusto. They rallied 3.75ȼ to $2.6475.

Consumers continue to reach for kitchen staples that are familiar and convenient, and Cheddar fits the bill. And when they tire of cooking, they’re apt to order a pizza. Domino’s reported a nearly 18% year-overyear increase in same-store sales in the third quarter. Papa John’s saw sales surge 27%. Government purchases and exports are keeping cheese moving too. In August, U.S. cheese and curd exports totaled 68.4 million pounds, up 16.6% from a year ago. 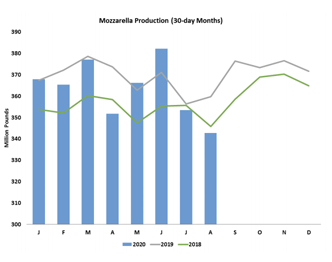 U.S. cheese output slowed in August to 1.09 billion pounds, down 2.1% from August 2019. Surprisingly, mozzarella output fell 4.4% year over year, a curious decline given pizza’s popularity. That left more milk for other cheese varieties, and Cheddar output topped the prior year by 0.5%. It’s likely that some cheesemakers pushed Cheddar into aging programs in August, when spot values were much lower than they are today. That has contributed to the current shortage of fresh cheese, but a decline in government purchases may free up some product soon. 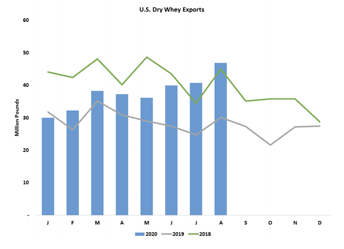 5.4% short of year-ago levels in August to 80.3 million pounds. Exports have been pretty respectable throughout 2020, but in August they were downright impressive, jumping 56% from the prior year to the highest volume since May 2018. Nonetheless, whey stocks climbed in August, signaling weak domestic demand.

Dryers processed less milk in August compared to earlier in the year, as the accumulation of summer heat stress and the beginning of back-to-school demand slowed the flow of milk to balancing plants. However, milk powder output was unusually strong given the season. Nonfat dry milk (NDM) production totaled 144.2 million pounds, the highest August volume since 1982. Combined 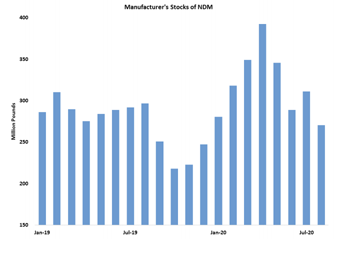 production of NDM and skim milk powder (SMP) was 4.8% greater than in August 2019. Nonetheless, stocks are not burdensome. Manufacturers’ inventories of NDM declined more than 40 million pounds from July to August and were just 0.4% greater than the prior year. Competitive pricing and firm international demand is helping to move milk powder abroad at a rapid clip. U.S. exports of NDM climbed 34.7% year over year to 151.7 million pounds, the highest August volume on record. Shipments to Mexico continue to lag, but the U.S. has boosted sales to Southeast Asia. If the U.S. can maintain this new market share and capitalize on pent-up demand from buyers south of the border, U.S. milk powder values are likely to continue to climb. CME spot NDM added a quarter-cent this week and closed today at $1.125. SMP prices took a small step back at the Global Dairy Trade (GDT) auction on Tuesday, but both GDT SMP and European markets remain notably higher than U.S. NDM values.

With the rest of the dairy complex gaining ground, the bears were relegated to the butter market. But they seem quite at home there. CME spot butter has fallen nearly 21ȼ in less than three weeks. It slumped to $1.395 yesterday, its first foray below $1.40 since early May. It rebounded today and finished at $1.4125, still 9.75ȼ lower than last Friday. This week, December through March butter futures scored life-of-contract lows.

Butter output slowed seasonally in August to 152.3 million pounds. Although that is much lower than daily

average output for much of the year, it’s extremely high for late summer, marking the largest August butter output since 1942. Given the ailing foodservice sector and concerns about diminished holiday festivities, we simply don’t need to be making this much butter. And foreign butter continues to add to the stockpile. Although U.S. butter imports slowed in August, the U.S. remains a net butter importer despite months of bargain basement pricing.

Weak butter values weighed on Class IV futures. The November through February lost more than 60ȼ apiece this week and continue to lag dairy producers’ cost of production by a sizeable margin. October Class III jumped 73ȼ this week to $20.91 per cwt., a life-of-contract high. November Class III added 37ȼ this week, while most deferred contracts added a nickel or so. Thus, the chasm between Class III and IV prices widened, creating a huge disparity between producers whose entire milk check is based on Class III and those whose revenue is watered down by the producer price differential and inadequate Class IV values.

The feed markets marched upward once again, buoyed by another week of strong exports and the growing threat of the La Niña in South America, where planting season is off to a very dry start. USDA did nothing to check the advance in today’s Crop Production and World Agricultural Supply and Demand Estimates (WASDE) reports. The agency held steady its assessment of the national average soybean yield, at 51.9 bushels per acre. It nominally 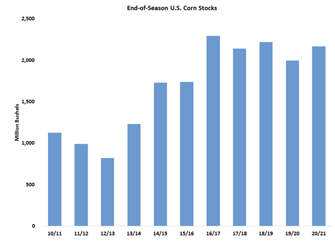 trimmed the corn yield from 178.5 in September to 178.4 today. But it chipped away at acreage estimates, reducing its assessment of corn harvested for grain by nearly one million acres and dropping harvested soybean area by 731,000 acres compared to the September report. The lower acreage reduced the harvest forecast for both crops, creating a little more feed for the bulls.

There is no reason for corn buyers to panic. USDA expects that when the season ends next September, there will be 2.17 billion bushels of corn in inventory, roughly on par with the historically high stock levels of the previous four seasons. But soybeans are likely to feel tight. End-of-season soybeans are projected to drop to 290 million bushels, a five-year low.

The European Energy Exchange (EEX) and Global Dairy Trade (GDT) have successfully concluded the initial consultation period regarding the establishment of a joint venture to operate a European-based auction mechanism for European dairy products. The [Read More …]