It was another very rough week on the farm and in the markets. The retail surge has petered out, as most Americans have now filled their freezer and their pantry. Consumers are still standing in the grocery checkout line with more dairy in their cart than in the past. But the industry cannot make up for lost foodservice demand and throttled exports by selling each grocery customer an extra gallon of milk, a little more butter for their home-baked goods, and a small package or two of cheese.

The dairy industry supply chain is in shambles. No one issue is entirely to blame, but the combination of lost sales to food service, logistical snarls, and full warehouses has forced some processors to take on less milk or to idle completely. On the East Coast, 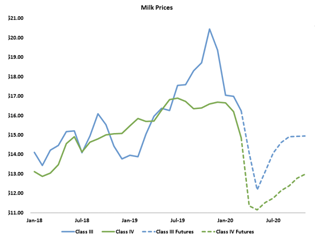 where the pandemic is most severe, some processors cannot run at full speed because their employees are staying home for fear of contagion. While many balancing plants are running as hard as they can, there is simply too much milk and too much cream. As the spring flush accelerates, the industry is buckling under the strain, and hundreds of loads of milk are going down the drain or into a lagoon every day.

Dumped milk means many producers will suffer steep discounts on already inadequate milk checks. The impact of the novel coronavirus has been heartbreaking for the dairy industry, which must quickly move fresh products to market. Since January 31, Class III futures have lost between 15 and 30%. May Class III futures are more than $5 per cwt. lower than they were two months ago. Class IV contracts have lost one third of their value, with May through July contracts down more than $6. 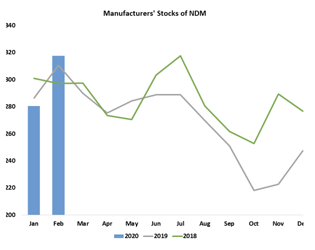 Among agricultural commodities, Class IV futures have sustained some of the steepest losses. Both nonfat dry milk (NDM) and butter are weighed down by oversupply. This week, CME spot NDM fell 5.75ȼ to 86.25ȼ per pound. Milk powder depends on foreign demand, and the strong dollar and logistical woes already slowed exports in February. After adjusting for Leap Day, U.S. NDM exports slumped 4.7% below year-ago levels. Product piled up in warehouses; manufacturers’ inventories reached 317.5 million pounds on February 29, their highest level since December 2017. Exports have slowed considerably since February, and output has not. 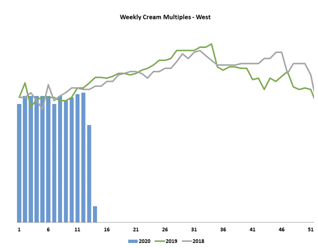 Butter has been abundant for some time, but recently the situation has worsened. February butter output was 5.2% greater than the prior year, after adjusting for Leap Day. Since then, butter production has likely climbed even higher. The sharp increase in fluid milk bottling has spun off more cream. Meanwhile, steep declines in restaurant traffic have nearly halted the flow of processed cheese, butter, cream, sour cream, ice cream, and other products laden with milkfat through foodservice channels. Cream is now historically cheap. In mid-March, cream traded in the West from 1 to 1.2 times the butter price. This week, multiples ranged from 0.5 to 1. Butter makers are likely topping up their churns, but there is still cream pouring down the drain. This week, 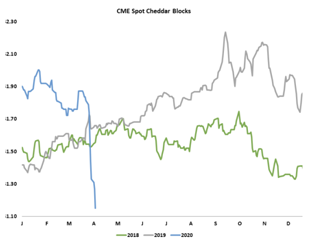 The cheese markets also revisited their 2009 lows. CME spot Cheddar blocks plunged 44ȼ to $1.15. Barrels dropped 20.25ȼ to $1.1375. U.S. cheese production reached 1.03 billion pounds in February, up just 0.1% from a year ago after adjusting for Leap Day. However, Cheddar production was 3.7% greater than the prior year, implying there is a lot of cheese that may wind up in Chicago if it cannot find a retail outlet. U.S. cheese exports to Mexico reached the highest-ever total for the month of February, but sales to South Korea and Japan dropped by nearly one third year over

year. Covid-19 took hold in Southeast Asia before it did in Mexico, so this trade pattern does not bode well for U.S. cheese exports in the months to come.

The red ink and dumped milk make it clear that without a thriving foodservice sector and little outlet for exports, U.S. milk output is far higher than demand. Unfortunately, severe contraction will be necessary to bring milk production in line with consumption. The markets are clearly telling dairy producers to cut output, and many cooperatives echo that message with programs to penalize overproduction. Ideally, dairy producers would send more cows to slaughter and at least recoup a beef check. But the packing industry is running into its own processing capacity issues. Slaughterhouse employees must often work in close quarters. The meat industry is finding it difficult to accommodate social distancing, and kill volumes could slow due to staffing shortages. If this issue worsens, it’s possible that dairy producers may not be able to cull as quickly as the market demands. 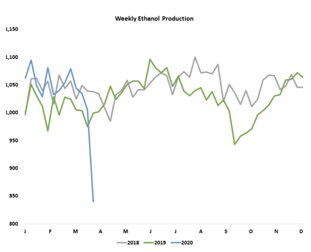 The feed crop markets lost ground this week. May corn settled at a three-year low of $3.3075 per bushel, down 15.25ȼ from last Friday. May soybeans dropped nearly 30ȼ to $8.5425. Due to sharply lower gasoline demand, ethanol production plummeted, leaving dairy producers and other livestock growers scrambling for a product to replace distillers’ grains. With ethanol makers on the sidelines, the corn basis has fallen precipitously. In many areas, the cash corn price is roughly a dollar lower than it was a month ago.

Manure Management Lessons to be Learned

It is now quite clear where the new reality for dairy farmers across America will lie. Following the initial settlement from the Cow Palace dairy case, where cow manure and specifically its sulfur content, was [Read More …]

When fellow farmers tell me the dairy checkoff program should just focus on the United States and forget about exports, I ask them a question they can’t seem to answer.   The Chester County Holstein [Read More …]