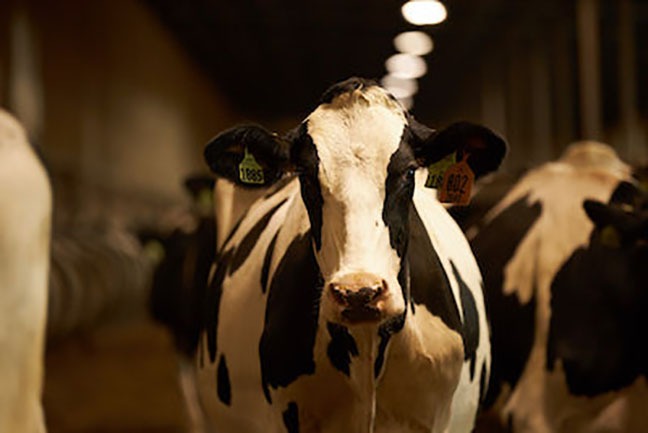 Studies have shown that more than 60% of new intramammary infections occur during the dry period, and an overwhelming majority (95%) of these are caused by Gram-positive bacteria.1,2

“The dry period presents a huge opportunity for new intramammary infections, and if an infection persists into the next lactation, it can lead to both subclinical and clinical mastitis,” said Mark van der List, DVM, Boehringer Ingelheim. “By having a basic understanding of the bacteria affecting your cows at dry off, you can make targeted management and treatment decisions for increased productivity in future lactations.”

Due to the prevalence of these mastitis-causing bacteria at dry off, producers are encouraged to identify the types of Gram-positive bacteria in their dairy herds and adjust dry cow management accordingly.

Gram-positive bacteria can be divided into two categories:

Environmental bacteria are acquired from the environment, usually from the teat making contact with manure or dirty bedding. This is the most common group of bacteria found on dairies. Examples include environmental Staphylococcus (coagulase-negative staph) and environmental Streptococci (Aerococcus spp., Strep uberis and Strep dysgalactiae).

To identify the bacteria causing clinical mastitis, milk samples can be cultured in consultation with your veterinarian. Wait 24 hours for results before deciding to treat mild to moderate cases caused by Gram-positive bacteria. Sampling can be done without a negative effect on cure rate or animal welfare. However, for severe mastitis cases, treat cows right away with an appropriate treatment protocol.

“Bacteria are easily spread cow-to-cow through udder wash rags, teat cups and other milking equipment,” noted Dr. van der List. “The good news is that producers can implement management practices to significantly reduce the threat of Gram-positive bacteria in their herd.”

He recommends producers implement the following practices to prevent intramammary infections, with special emphasis on the dry period:

Strategic management practices will help lessen the chance of dry cows being impacted by Gram-positive bacteria but cannot completely eliminate it. This is where dry cow therapy comes into play. There are numerous benefits to implementing dry cow therapy, including curing existing infection and reduced incidence of new infections, which leads to fewer instances of subclinical and clinical mastitis after freshening.

“We tend to see more infections during the dry period because of lowered immunity in the udder and because bacteria are no longer being flushed out of the teat canal during milking,” said Dr. van der List. “To ensure cows are achieving optimal milk production in their next lactation, I suggest using a highly effective dry cow antibiotic treatment to cure existing infections, followed by an internal teat sealant for the prevention of new infections at dry off.”

Using a coliform mastitis vaccine provides additional protection against mastitis caused by Escherichia coli and can reduce the impact of endotoxemia due to E. coli and Salmonella Typhimurium.

Proper milking procedures, including using sanitary milking equipment, dipping teats immediately prior to and after milking, and culturing milk samples from purchased animals before mixing them into the herd are all factors that aid in reducing the spread of mastitis-causing bacteria.

Keeping accurate records of clinical mastitis will also help producers identify cows with chronic mastitis, and allow them to make appropriate management decisions to protect other animals from infection.

Dr. van der List encourages producers to work with their local veterinarian and a milk quality lab to identify the type(s) of bacteria affecting their herd, and establish an effective dry cow mastitis management program.

On-farm culturing allows for more informed decisions to be made regarding treatment and can help answer questions about whether to treat a quarter or not. Does every cow with mastitis need treated? Have you ever [Read More …]

During mastitis treatment, focus on the infection instead of the inflammation The standard practice on dairies has been to treat mastitis until the inflammation is gone, which is why some five-day treatment regimens have become [Read More …]

Mastitis In Dairy Cattle: Prevention Is Better Than Cure