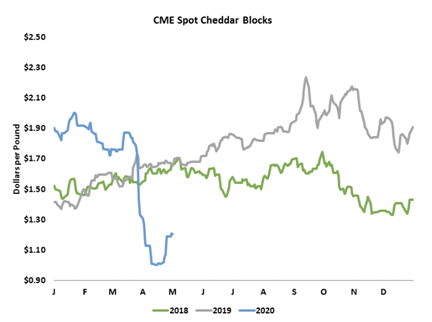 At long last, a rally! Most dairy markets bounced back this week, with enthusiastic double-digit gains in Class III and mixed results in Class IV. Cheese led the comeback. CME spot Cheddar blocks climbed 13.5ȼ this week to $1.205 per pound. Barrels rose 14ȼ to $1.19. Spot whey added a penny and reached a year-to-date high at 39.5ȼ. Spot butter rallied 4.25ȼ to $1.1875. However, the nonfat dry milk (NDM) market continued to slip. Spot NDM closed at 79.25ȼ, down 1.75ȼ to its lowest value since July 2018. That is below the European Union’s Intervention purchase price for skim milk powder (SMP), which suggests that further downside may be limited.

There is still more milk than the market needs. But for myriad reasons, the excess has become a little less burdensome. The markets are working. Bargain pricing has enlivened U.S. cheese exports. Inordinately cheap milk has given some dairy processors the courage to ramp up output even before would-be buyers commit, reducing the volume of dumped milk. Ice cream season has arrived, which is helping to lap up some of the glut in the cream market. Processors are adapting some supply lines to direct more product through retail channels. Grocers are restocking. As consumers grow weary of staying home, some restaurants are ordering food in anticipation of better demand. Restaurant sales are still terrible, but traffic is not quite as abysmal as it was in early April. Indeed, some fast food chains report that business is booming. However, many restaurants remain dark. Meanwhile, the temperature, the milk price, and steep over-production penalties are all working to slow milk output. 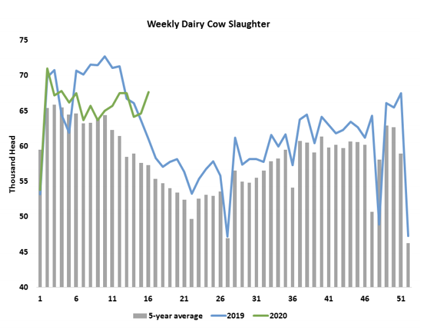 With nearby milk at $10 or $11 per cwt., dairy producers have every incentive to trim their herds. Despite crippling issues at the nation’s slaughter facilities, dairy cow culling has remained high for now. Based on data through April 18, dairy cow slaughter has climbed to 34-year highs in three of the past four weeks. The tidal wave of Covid-19 infections in the meat packing industry has swamped the larger facilities, which generally focus on beef cattle. Smaller facilities that kill dairy cows are also swimming against a tide of infection, absenteeism, and slower throughput, but the current is not as strong. Some dairy producers have not been able to cull all the cows they would like, but the national herd is likely shrinking. 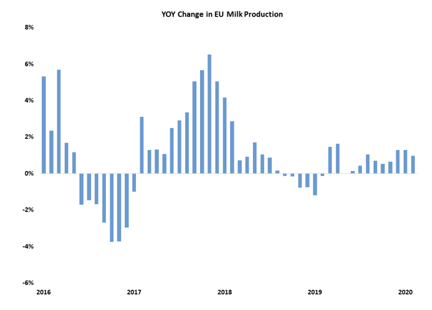 Around the world, milk production is growing slowly. On a milk solids basis, milk collections inched up just 0.1% in New Zealand in March. Dry weather is likely to weigh on output as the season draws to a close. Milk collections in Australia jumped 7% from a year ago, but they are still historically low. Australia’s dairy industry has been crippled by years of drought. A recovery from last year’s paltry milk output still doesn’t add up to a lot of new milk. Daily average milk output rose 1% from a year ago in the EU-28 in February. Growth is likely to remain tepid. Europe’s dairy industry is facing the same struggles as ours, and the European Commission may grant nations and co-operatives permission to implement schemes to reduce milk production.

Chinese milk powder imports got off to a slow start this year but improved in March. Combined imports of SMP and whole milk powder (WMP) climbed to 158.1 million pounds, up 11.3% from March 2019. That helped to narrow China’s year-to-date import deficit from 11.7% at the end of February to 7.8% at the end of March after adjusting for leap day. Going forward, China may need less foreign milk powder. Covid-19 lockdowns severely 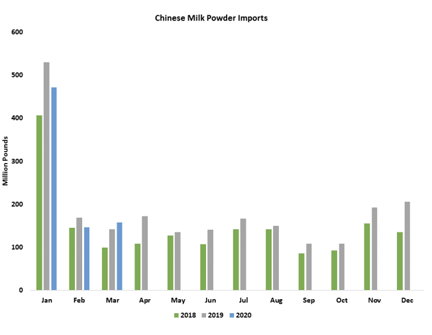 Overall, the dairy markets were a little less bleak this week. The market is seeking balance, and is not wobbling as precariously as it was 10 days ago. Painfully low prices have helped to stimulate some demand and reduce supplies. Unfortunately, there is more work to be done on the supply side. Dairy consumption is not likely to recover fully until consumers are confident to socialize and spend normally. USDA announced the April 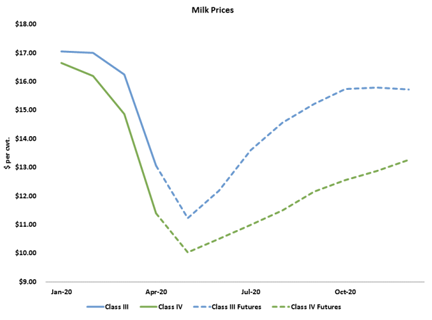 The soybean market was cheered by news that China is once again buying U.S. soybeans. The July contract rallied 2.75ȼ this week to $8.495. Soybean meal values were basically steady. The corn market continued to lose ground. July corn settled today at $3.185 per bushel, down 7.5ȼ from last week. Ethanol output has been cut in half, and projected demand for livestock feed is dropping as growers do all they can to hold animals back. Beef producers are keeping cattle on pasture, while pork and poultry growers are slowing breedings and breaking eggs. Farmers are planting corn at a rapid pace, with soybean seedings to follow. Dry weather is becoming a concern in Europe, Russia, and South America, which could trim global production from previously lofty projections. Still, there will be more than enough.

Most everything is up 3-4%. Luckily we are still under the older “higher of Class III or Class IV” for the Class III skim. If the new system in the Farm Bill had been implemented [Read More …]

The Bulls Bellowed With Shouts of “New Highs!”

The bulls bellowed on LaSalle Street today, with shouts of “New highs!” CME spot Cheddar blocks climbed 3.25ȼ this week to $18.575 per pound. Barrels rallied 5.25ȼ to $1.79. Both blocks and barrels stand at [Read More …]