Chart I below shows the extreme volatility in the pricing of cheese.  In a matter of just two months, the price of cheese used to partially calculate the Class I price in the Advanced system has jumped from $1.19 per pound in June to a record price of $2.57 per pound in August.  The June cheese price as shown on the chart is a 15-year low and the August price is an all-time high.  The volatility in cheese pricing which was covered in the prior post is making market moves that are unprecedented. 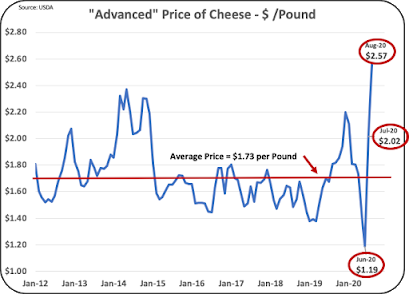 In May 2019, a new price formula for Class I was implemented.  This change was covered in a January 2020 post to this blog.  In that post, the impact of the change was for more negative Producer Price Differentials (PPDs) leading to more de-pooling which in turn further exaggerates a negative PPD.  In August 2020, the new formula compared to the old formula decreased the base price of Class I skim milk by $4.74 per cwt. as shown in Chart II.  Chart II was developed based on the Advanced pricing of Class III and IV using the new and old formulas for Class I pricing.  Until June of 2020, the pricing differentials were relatively minor.  In August, the pricing impact on Class I skim milk is huge.
Why is this important?  The PPD is basically the difference between the “Uniform” or average price of producer milk and the Class III price established by the Class and Component pricing formulas.  When the Class I is lower, it will lower the “Uniform” price and cause the PPD to be negative.

Chart V shows the Advanced price of Class III.  The price of Advanced Class III has nearly tripled in just two months.  In June it was $6.68 per cwt. and in August it reached $18.08 per cwt.  That is real volatility.  The prior post covered the inventories levels of cold storage cheese to see if this was causing the volatility in cheese prices.  It is not.  The huge change in cheese prices is a bit of a mystery as the industry goes through the changes inflicted by quarantining and the Coronavirus Food Assistance Program (CFAP).

The final Class III prices for August will not be announced until the end of August.  Only then will the impact on de-pooling and the PPD for August be known.  On July 29, data for the fourth week of the NASS pricing period for June was announced.    Chart VI shows the progression of cheese prices for June.  There are five weeks in the June calculation so there is one more week to come.  However, based on the first four weeks, the cheese prices will be well into a very high record cheese price.
The extreme volatility inflicted on producer milk prices is unprecedented.  It is difficult to predict when prices will normalize, but with a probably negative PPD again in August, any return to more normal market movements will not happen until later in 2020.

Milk & Dairy Markets The CME spot Cheddar markets got off to a strong start, scoring fresh 2018 highs on Monday. Blocks climbed to $1.7025 per pound and barrels reached $1.6525. But they couldn’t hold. Barrels staged a modest [Read More …]

Why was Q2 Milk Pricing so Volatile? What will Happen in Q3?

Cheese pricing data for the second quarter of 2020 is now complete.  Some data is available for July.  The charts in this post give us a good picture of why there were huge swings in [Read More …]