All of the CME spot markets moved higher, and cheese did so with particular verve. Once the laggard, barrels are now the leader. 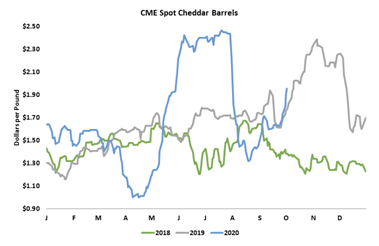 The leaves are turning, pumpkin spice is brewing, and football players are lacing up their cleats. Fall is here. Though it’s too soon for hibernation, the bears looked a bit lethargic this week. They gave the bulls free rein of LaSalle Street. All of the CME spot markets moved higher, and cheese did so with particular verve. Once the laggard, barrels are now the leader. They gained another 29.5ȼ this week and reached $1.955 per pound, echoing the shocking rally of a year ago. Blocks climbed 5.5ȼ to $2.61. The block-barrel spread remains historically wide, at 65.5ȼ, but barrels have cut the gap by a third in the past two weeks. Barrels are available, for a price. However, blocks remain scarce.

The market does not expect such sky-high pricing to last, but the futures do not call for a collapse. The October and November cheese contracts are holding above $2, while 2021 futures are trading around $1.75. Cheese output remains robust, although spot milk is no longer selling at a discount in the Upper Midwest. Government purchases are helping to tighten the supply of commodity cheese, but those purchases are expected to wind down soon.

Restaurants continue to move Italian-style cheeses through takeout channels, as Americans considering takeout or delivery almost immediately think of pizza. Other foodservice demand is still hit or miss, and the industry is bracing for a disappointing holiday season with fewer cheese trays making the rounds at corporate events. 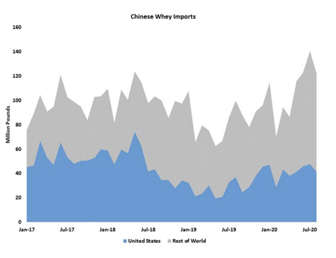 Despite strong cheese production, whey values climbed once again. CME spot whey advanced 1.25ȼ this week to 39ȼ, the highest price since mid-May. Rising milk powder values have put a firm floor under the whey powder market, and both domestic and international users are looking to buy. Chinese demand continues to impress. China imported 112.4 million pounds of whey in August. Although that is shy of the record-breaking total from July, it is 23% higher than Chinese whey purchases in August 2019. The U.S. accounted for onethird of the total. China is likely to remain hungry for foreign whey as it tries valiantly to rebuild and modernize its swine herd. 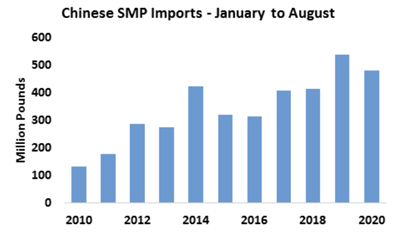 China imported 66 million pounds of whole milk powder (WMP) and 60.7 million pounds of skim milk powder (SMP) in August. Chinese WMP imports were 18.6% lower than the prior year in August and are now 2% lower than 2019 for the year to date. China’s year-to-date SMP imports are 10.6% shy of the record-breaking pace set in 2019, but they are still higher than every other year, including 2014. China has reportedly whittled down some of the SMP stockpile it accrued last year, which suggests that the world’s most closely-watched dairy importer can continue to onshore sizeable volumes of SMP. 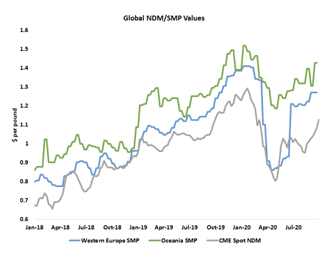 U.S. milk powder remains an attractive bargain for foreign buyers. The U.S. accounted for more than 10% of China’s SMP imports in August, its third straight month with a relatively strong showing in a market that is often dominated by Oceania and Europe. Mexican buyers are stepping up purchases too. That helped CME spot nonfat dry milk (NDM) to $1.1225, up 2.25ȼ from last Friday.

Spot butter inched up 0.75ȼ this week to $1.51. Ice cream season is over, leaving more cream for churns. And there is plenty of butter in freezers of all sizes, from commercial warehouses to restaurant coolers to home kitchens. The industry is hoping that bakers will be especially enthusiastic this year, which could make up for the ailing foodservice sector. 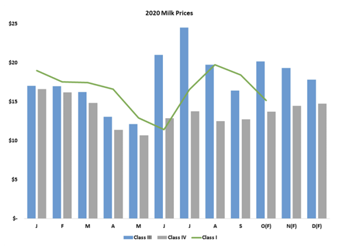 For the most part, Class IV futures moved cautiously higher this week. Fourth-quarter futures averaged a paltry $14.43 per cwt., but 2021 contracts are all $15 or better. With both cheese and whey on the rise, nearby Class III futures moved sharply higher. The October contract rallied $1.30 to $20.18 per cwt. November added 83ȼ and December gained 31ȼ. First-quarter 2021 contracts settled a little higher than last Friday.

USDA announced the October Class I mover at $15.20, which means that Class III manufacturers will have every incentive to depool milk once again. Dairy producers in many regions will deposit disappointing milk checks derived primarily from the much lower Class I and Class IV prices. The producer price differential is not likely to be as punitive as it was in June and July, when Class III futures outpaced the Class I

mover by $9.62 and $7.98, respectively, but it will take a sizeable bite out of many producers’ October milk checks nonetheless.

USDA reported smaller September 1 crop inventories than the trade had expected, implying that either demand has accelerated or that last year’s crop was smaller than previous estimates. The news gave the feed markets a considerable boost. Strong exports – particularly for soy products – and a dry start to the South American season kept the rally going. December corn settled today at $3.7975 per bushel, up 14.5ȼ from last Friday. November soybeans climbed 18.5ȼ to $10.2075. December soybean meal rallied $13.30 to $351.90 per ton, a new life-of-contract high.

President Trump, in a pair of tweets yesterday, announced he plans to delay the imposition of an additional 5% duty on $250 billion worth of Chinese goods until October 15. Before this announcement, duties on [Read More …]