At meetings held Jan. 6 – 8 in Chino, Tulare, Turlock and Petaluma, Dr. Marin Bozic and Matt Gould – the two economists (the TEAM) hired by the industry to guide the search for a consensus way forward on quota – presented their findings from the producer feedback surveys collected late last year at the Phase II meetings.

As we reported in the October 25 and November 1 editions of the MPC Friday Report, 11 different options for dealing with quota were presented for consideration. What we learned this week is that 137 producer surveys were submitted and analyzed by the TEAM. Those surveys represented nearly 20% of the milk produced in California and the quota holdings of the respondents closely tracked the quota holdings of the California producer population, with a slightly higher response rate from high quota holders. From this feedback, three specific approaches emerged as viable proposals for dealing with this issue.

The proposal would start with the quota differential at $1.09 per cwt. and then adjust it every year based on the Class I revenue from the previous year. Currently, Class I sales are dropping at a rate of about 2% per year. If that trend continues, the quota differential would also drop about 2% per year. The QIP assessment to fund this proposal would start out at about $0.26 per cwt. You might wonder why the differential is $1.09 when the Class I differential in California is between $1.60-$2.10 per cwt. The reason for this is that there are significantly more pounds of quota SNF that exist than there are pounds of Class I sales. The idea behind this proposal is that if producers want to continue a quota program, then equating it to the Class I income is a way to do that that would have what the TEAM calls “legitimacy.” For more detail on this proposal you can read the memo written by the TEAM here.

The second proposal is a sunset for the quota program. This proposal would set a date in the future at which the QIP would cease to exist. The quota payments between now and that termination date would represent the “compensation” quota holders would receive for their quota. Based on the producer survey, the team suggested that a termination time frame somewhere between 3 and 7 years would possibly garner supermajority support from California producers. You can see from the table below how many dollars per pound of quota would be collected under this proposal. It ranges from $180 for three years in Tulare to $420 for seven years in Tulare. For Chino the range is $213 for three years to $497 for seven years. If the RQA’s were equalized at the Tulare level, then the Tulare amounts would apply statewide. 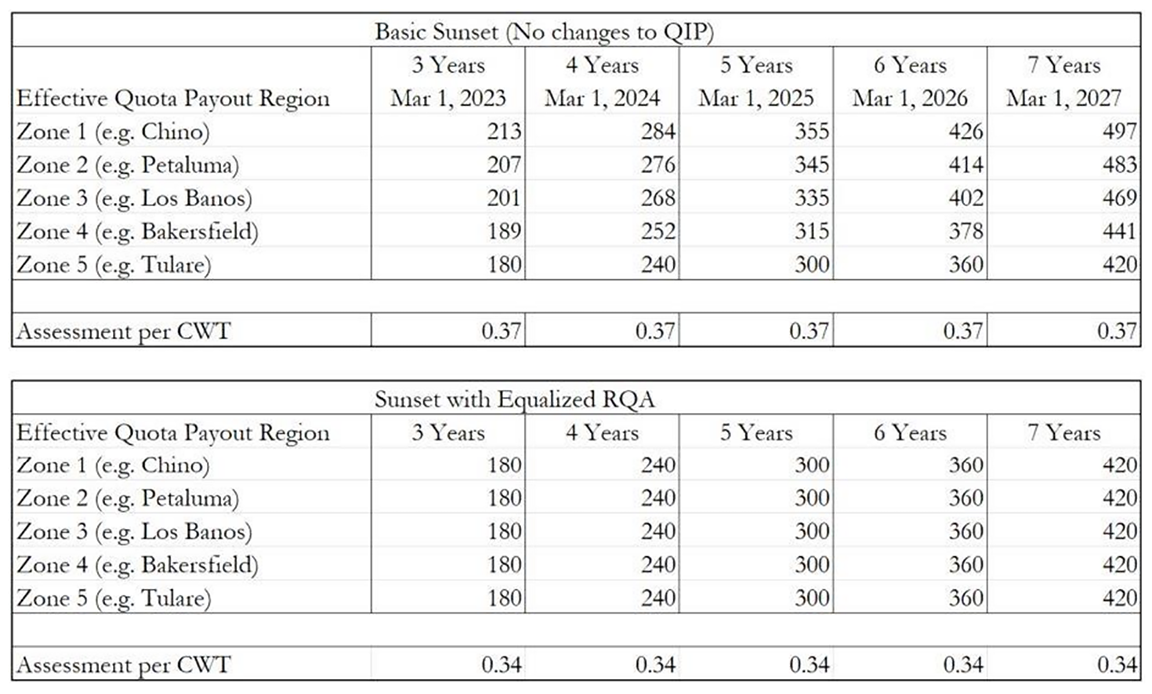 The third proposal is to buyout the quota with a bond or loan. In both the sunset proposal and the buyout proposal, the TEAM suggests that March 1, 2020 is the start date from which the payoff clock starts. By this they mean that QIP payments received after March 1, 2020 count as compensation toward whatever value the quota holders agree to accept in exchange for terminating the program. The scenario outlined envisions monthly payments for the quota during 2020 and a final balloon type payment in January of 2021. After the final payoff, all quota would be extinguished. What would remain are the assessments to pay back the loan or bond. All grade A milk in California would pay the assessment. The assessment level under the buyout option would be no more than the assessments for a comparable sunset option and could be less if the payment schedule was stretched out a few more years. The buyout price will determine the length of the payment schedule.

The TEAM has consulted with banks and Wall Street financiers and believes there is strong interest in providing the financing for a quota buyout provided there is adequate security to assure repayment. Legislation would be required to facilitate this option. For more detail on this proposal you can read the TEAM’s memo here.

There is another memo written by the TEAM that is worth reading. It is titled “Choosing the Path Forward for California Dairy Quota.” You can read it here.

Dr. Bozic made a major commitment at the meetings this week. He promised that in early February, the TEAM would be finalizing their report and will include a specific proposal that they believe has the highest probability of garnering super majority support from the California producer community. Hopefully, this recommendation will come with a detailed roadmap on the steps necessary to bring it to completion.

The mood at the meetings was sober as everyone contemplates the impact of this issue on his or her operation and on the industry at large. Dr. Bozic and Mr. Gould have done an incredible job learning and listening to our industry, as well as applying solid economics, wisdom, and frankly courage to their work for all of us.

Phase 3 meetings regarding options for the California quota program will be held on January 6-8 throughout the state. At these meetings, Dr. Marin Bozic and Matt Gould will present the three proposals brought forward [Read More …]

The Two Professors Come to California

By Geoffrey Vanden Heuvel The author, a dairyman in Chino, Calif., is a board member and economics consultant for the Milk Producers Council.  This piece appears in the MPC newsletter dated Apr. 20 and is [Read More …]

Class and Component Prices for December 2019

The class and component prices for December 2019 are broken down and explained by Lawrence Jones. Plus, he gives viewers a preview of The CWT website with instructions to gain access to this valuable tool. [Read More …]