The Canola Council of Canada recently completed a survey of the nutritive value of canola meal produced by 12 Canadian meal producing plants. Samples of meal were obtained 3 times per year for 4 consecutive years from 2011-2014. Samples were analyzed for all nutrients, including rate and digestibility factors for fiber and protein. The results of the survey, along with numerous research trials has brought to light some new information regarding the feeding value of canola meal for dairy cows(www.canolamazing.com). 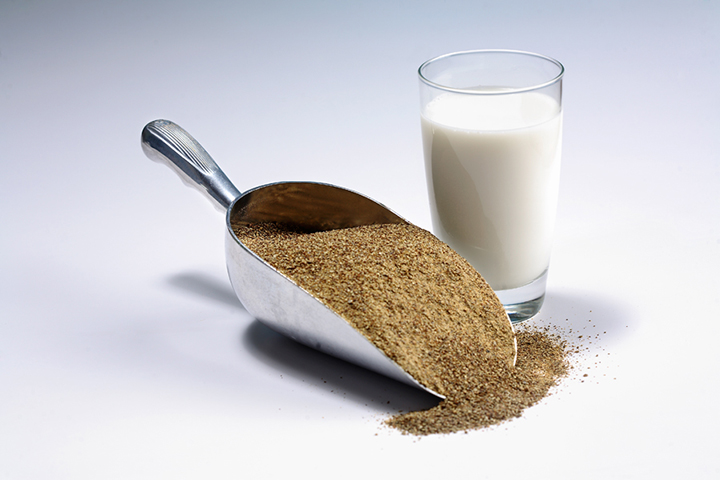 Fact 1. On a pound for pound basis, canola meal provides as much digestible rumen undegraded protein  (RUP) as soybean meal.

Canola meal has long been recognized for its superior amino acid profile, relative to the needs of the cow. The overall amino acid profile of canola meal is closer to that of rumen microbial protein than other vegetable proteins, providing a very high milk protein score (Figure 1). This means that very little remodelling of the protein is needed, and it readily meets the requirements of the cow for milk production.

Again this allows diets to be formulated with lower levels of protein and still meet amino acid needs when canola meal is the primary source of supplemental vegetable protein.

Fact 3. Canola meal is an excellent source of phosphorus

Phosphorus is generally one of the more expensive feed additives. Canola meal is a rich source of phosphorus, with most of this mineral in the form of phytate phosphorus. Unlike monogastric

animals, this form is available to ruminants, due to the presence of bacterial phytases in the rumen that rapidly degrade phytate, rendering this mineral available.

Fact 4.  Greater levels of iodine can be given to cows without increasing milk iodine

Topical and dietary iodine has long been prized as antimicrobial substances, serving dairy farmers well. Several European studies have shown that the minute quantities of glucosinolates (sulfur containing compounds found in cruciferous vegetables) in canola meal reduce uptake of iodine by glands, such as the mammary gland and the thyroid gland.

A recent study conducted at The Ohio State University (Weiss et al., J. Dairy Sci 98:4841-4849) demonstrated this effect (Table 4). Canola meal added to the diet supported higher levels of iodine in the blood, while at the same time, reducing concentrations in milk. This provides an opportunity to utilize higher iodine ingredients if paired with canola meal.

Fact 5. The fiber in canola meal is highly digestible

Older publications, such as the 2001 NRC Publication Nutrient Requirements of Dairy Cattle, used lignin to estimate the indigestibility of fiber. Although this method may have been useful for forages, it was also applied to concentrate ingredients, without validation.

As a result of research conducted at Miner Institute and Cornell University (Cotanch et al., Proc 2014 Cornell Nutrition Conf.), Canola Council of Canada commissioned a study to determine the rate and extent of NDF digestibility from all 144 survey samples that had been collected.  Researchers at Nevada State University (Paula et al., J. Dairy Sci 100(Suppl 2):329-330) determined that less than 20% of the fiber was truly indigestible. They estimated that the actual digestibility of the NDF at 3 times maintenance intake would be 60-65% of the total. This value is double the value estimated in the outdated publication. This means that canola meal should receive a higher energy value than previously thought, although not as high soybean meal.

Fact 6. Net energy (NE) as a percent of metabolizable energy (ME) is greater for canola meal than for soybean meal

In most models, NE is calculated from ME, and therefore there is a fixed relationship between the two. However, there are two reasons why fact 6 is true. First, the amino acid profile of canola meal is closely allied with the amino acid profile needed for milk synthesis. The mammary does not need to degrade excess essential amino acids that are out of alignment with requirements. This saves energy. Second, less methane is generated from canola meal compared with soybean meal. In a study conducted at the USDA Forage Research Center in Wisconsin (Moore et al, J. Anim. Sci. 94:572), early lactation cows receiving canola meal produced less methane gas, meaning that this energy was available to support milk production or body weight maintenance. There is no question that soybean meal provides more energy per pound than canola meal, but the gap between the two meals is less than was previously thought.

Les Berghorn is General Manager and National Sales Manager Afgritech with over 35 years of experience in the dairy feed business.  He has been a part of Afgritech since its founding in Watertown, NY in 2011.  He has broad knowledge of the Northeast dairy market and understands the needs of the dairy industry.

Essi Evans, Ph.D is President of E+E Technical Advisory Services. She earned her B.S. degree in Agriculture from the University of Maryland, and Masters and Ph.D degrees in ruminant nutrition from the University of Guelph. Working for the feed company Shur-Gain, she was vice president and managing director of research. In 2002, she started her own company to provide technical and managerial support to other establishments, plus assistance with research and product development.

Can substitute soybean meal up to 100% without detrimental effect New high-protein canola-meal products are available for inclusion in swine diets, but until now, it wasn’t clear how these products would affect gestating and lactating [Read More …]

In conjunction with Agriculture Modeling and Training Systems’ (AMTS) The Nutritionist webinar series, the Canola Council of Canada is offering a series of three webinars demonstrating the use and versatility of canola meal as a [Read More …]