While the world is focusing on the burning of the immense above-ground Amazon forest, no one is mourning the loss of the (fossilized) forests that lie below the surface of the earth. The ones we are churning through at an unprecedented rate are our ancient forests, commonly referred to as “fossil fuels”, with enormous impact on greenhouse gas emissions.

Fossil fuels are plants and animals that inhabited the Earth hundreds of millions of years ago, and that are now unleashed, promising their minions untold comforts and riches. But the gifts come at a price far dearer than anyone could have imagined. Once freed from the “vasty deep,” they wreak havoc on the planet and the very people who set them free, calling into question their ability to survive the invasion.

It sounds like a science fiction movie, but sadly, it’s rooted in fact. Our seemingly endless obsession with the burning of fossil fuels is doing more than any other human activity to add excess carbon dioxide (CO2) to our atmosphere. As a matter of fact, the use of fossil fuels accounts for almost 37 gigatons of the total 49 anthropogenic (human-caused) gigatons of greenhouse gases (GHG) entering our atmosphere each year. In other words, most of them. 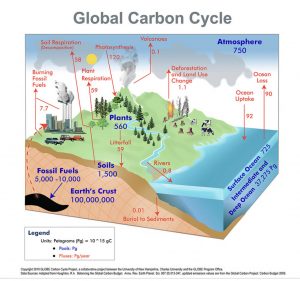 The Amazon is big, but the behemoth lies below

As the fires in the Amazon continue to burn, it’s more important than ever to remember where the lion’s share of our CO2 is coming from. Many have warned that the potential demise of the world’s largest rainforest will mean a disastrous release (as far as global warming is concerned) of the carbon that is naturally stored in the plethora of plant life that lives there.

In addition, it would affect the short-term carbon cycle, whereby plants and animals (including us) exist in a wonderfully symbiotic relationship involving oxygen and CO2. We not only exist together; we exist because of each other, using each other’s nutrients to sustain life. As magical as the short-term carbon cycle is, however, it is woefully inadequate when it comes to making a dent in the glut of CO2 hanging in our atmosphere from fossil fuels. 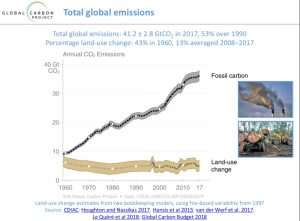 It bears emphasizing that the Amazon wildfires are tragic for many reasons, including the fact that they are now acting as a smokescreen for the biggest burn of all. While the world is focusing on the demise of this immense above-ground forest, no one is mourning the loss of the ancient forests that live below the surface of the earth. The ones we call fossil fuels and which we are churning through at an unprecedented rate.

The world beneath us

Few have said it more colorfully than Peter Brannen in his recent article in The Atlantic:

“Underneath West Virginia and England are vast sleeping jungles, over 300 million years old, filled with centipedes the size of alligators and scorpions the size of dogs. Under West Texas is a tropical coral reef from a 260-million-year-old ocean, visited, in its day, by sharks with circular saw teeth. Under Saudi Arabia are whole seas of plankton that pulsed with the seasons and sunbathed under the waves in the age of dinosaurs,” he says. “This is what we are burning at Earth’s surface today. We’re not just burning down the Amazon. We’re burning down all the forests in Earth history that we can get our hands on.”

Simply put, fossil fuels are the plants and animals that avoided decay and instead, slowly but surely morphed into oil, gas coal and rock under extreme pressure and with the luxury of millions of years of being left alone.

They were once living things, which means they’re largely made up of carbon. When they’re brought to the surface of the Earth and burned, the carbon combines with other gases, with the major byproduct being CO2. After water vapor, CO2 is the most plentiful greenhouse gas in our atmosphere. As such, it serves as a ceiling that prevents the sun’s heat from dissipating into the atmosphere. A healthy amount makes our planet habitable. More than we need makes Earth too warm.

The story of climate change

Of the major greenhouse gases CO2, methane (CH4) and nitrous oxide (N2O), CO2 has the lowest potency (i.e. global warming potential per molecule). Yet, its life span is much longer. As the EPA points out, some of it is absorbed very quickly by the ocean, but “some will remain in the atmosphere for thousands of years ….”

It’s more than a story of climate change. It is THE story of climate change. In less than a century, we’ve churned through what many believe to be half of the fossil fuels that reside in the Earth’s crust, effectively turning the natural carbon cycle into a one-way street that dead-ends in our atmosphere. Consider that our greenhouse gases consist of more than 80 percent CO2.

And yet, we continue to hear that we have to take personal action to affect climate change. There’s an oft-heard battle cry that if we give up meat, we’ll save our planet. That’s far from the truth. In reality, in the US, 80 percent of all GHG stem from fossil fuel using industries. In contrast, all of animal agriculture contributes to 3.9 percent (all of agriculture is 9 percent) of GHG emissions and overall, agriculture and forestry combined, reduce (i.e. sequester) more GHG than they emit.

To be clear, I’m in no way suggesting that livestock and other factors don’t contribute to greenhouse gases. They clearly do. In the case of animals, some give off methane, which has 28 times the global warming potential of CO2. Even so, methane behaves very differently than long lived climate pollutants such as CO2, and thus, we have less to fear than some would have us believe. (Stay tuned for a future blog post about the difference between a short-lived gas like methane and CO2.)

Indeed, there is a long list of activities that are turning up the heat on our plant. The problem I see is that some of them – meat consumption and deforestation, for example – while not innocent bystanders, are often put forth as scapegoats. The major problem by far – the 800-pound gorilla, as it were – is the burning of fossil fuels. Michael Mann and Jonathan Brockopp recently said as much in their op-ed that appeared in USA Today, America’s most widely circulated newspaper.

It seems as if we will do whatever we can to avoid pointing a finger at our insatiable appetite for fossil fuels. And until we do, we’ll never be able to see the forest for the trees.

Editor’s note:  This article is taken from the author’s blog which can be found at ghgguru.faculty.ucdavis.edu and is used here with permission.  Dr. Mitloehner has become widely known for his efforts to communicate the facts about agriculture’s impact on the environment.  As he says, “Simply put, we must better understand the role of agriculture in nourishing our world. At the same time, we need to know where to focus our attention for cleaner air and a stable climate.”

It’s a frightening prospect to think any person or entity with significant funds could buy editorial time or space to promote a specific ideology, but that’s what’s going on between the Guardian and the Open [Read More …]