The Legislative Changes to MPP-Dairy

Significant changes to the 2018 implementation of the Margin Protection Program for Dairy Farmers (MPP-Dairy) are included in The Bipartisan Budget Act of 2018 that was just passed. This briefing paper summarizes the legislative changes and begins to review the possible implications of the changes. As is common with any agricultural program legislation, USDA will need to review the law, make a few decisions about how to implement the changes and issue new or modified regulations that provide specific instructions about what farmers can do and when they can do it. It is anticipated that this process will happen fairly quickly.

The normal procedure has been for a dairy farmer to elect coverage levels under MPP-Dairy for the coming year in the month before the start of that year – a December sign-up deadline for a year that begins in January. As farmer dissatisfaction with MPPDairy became more apparent and grew, it was widely anticipated that few farmers would utilize the program in 2018. The new legislation instructs USDA to reopen the 2018 signup process and allow dairy farmers, including those who signed up and those who did not, to elect their choices anew. Specifically, the bill states:

The Secretary shall extend the election period for the 2018 calendar year by not less than 90 days after the date of enactment of the Bipartisan Budget Act of 2018 or such additional period as the Secretary determines is necessary for dairy operations to make new elections to participate for that calendar year, including dairy operations that elected to so participate before that date of enactment.

*Andrew M. Novakovic is the E.V. Baker Professor of Agricultural Economics in the Charles H. Dyson School of Applied Economics and Management at Cornell University.

The Information Letter series is intended to provide timely information or an interpretation of current events or policy development for Extension educators, industry members and other interested parties. The author reserves all copyrights on this paper, but permission is granted to quote from the paper or use figures and tables, provided appropriate attribution is made.

MPP-Dairy pays dairy farmers the difference between the Actual Dairy Producer Margin (ADPM) and the coverage level elected by the farmer. Thus, if a farmer chooses coverage at $6.50 per cwt and the ADPM falls to $6.10, the farmer is paid 40¢ per cwt on the amount of milk covered. The original language of the program calculates the ADPM each month but payments are based on the average of successive two-month periods: Jan/Feb, Mar/Apr and so on. This resulted in a few instances where a month fell below a coverage level but the adjacent month was sufficiently high to put the two-month average outside of the payment level. The new MPP-Dairy is converted to a monthly payment. Thus, payments will be made on 1/12 of the production enrolled in any month that the ADPM falls below the producer’s coverage level.

Three changes were made in the premiums and fees producers are required to pay.

First, the $100 fee that everyone enrolled in the program was required to pay will be waived by farmers who meet USDA criteria as “beginning, limited resource, disadvantaged, or military veteran farmers”.

Second, the dividing line between Tier 1 (lower) and Tier 2 (higher) premiums is raised from 4 million pounds of milk covered per year to 5 million pounds.

Third, the premium rates in Tier 1 are substantially lowered, as illustrated in Table 1. Beyond making the $4.50 and $5.00 coverage free of any buy-up premiums, the rates at all other levels are lowered 40 to 70%. Coverage levels of $7 and above are especially more attractive under the new pricing plan. 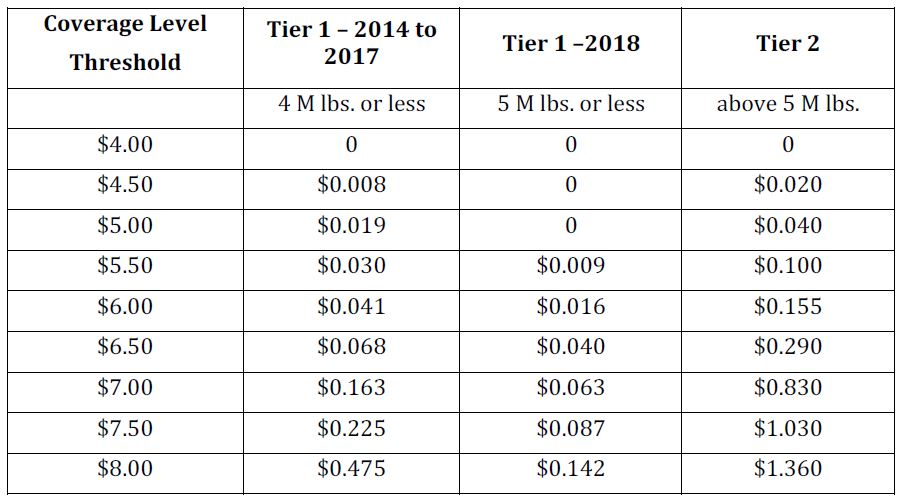 What Will or Should Dairy Farmers Do?

Although as of this writing the decision aid tool for MPP-Dairy on the Program on Dairy Markets and Policy website:

has not yet been updated, the changes to the program for Tier 1 are sufficiently improved to more than justify giving the program a hard look. The expected results for the ADPM (margin) are illustrated in the decision tool. Although they are currently shown as two month averages, the changes to the structure of the program do not impact the projection of the margins. As is indicated by the decision tool and obvious from any prospective market analysis in the press, it is widely expected that margins will be well below the $8 threshold and have a better than 50% probability of being below $7 through June. Expected margins show improvement in July and August and the probability of payments for the last four months of the year are 1 out of 4 or 5 at the highest, $8 level.

Every farmer must evaluate their own risk level and make their own decision, but the reductions in the Tier 1 premiums warrant a second look at an enrollment and coverage decision.

If a farmer has an LGM-Dairy contract for any months of 2018, he will not be able to enroll in MPP-Dairy for those months.

In addition to these changes to MPP-Dairy, which is an income support program operated by the USDA Farm Service Agency, the bill makes an important change that affects the availability and appeal of the older Livestock Gross Margin for Dairy risk insurance program (LGM-Dairy).

LGM-Dairy operates somewhat similarly to MPP-Dairy in that it gives farmers an opportunity to establish protection against a contracted level of income over feed cost. The calculation of the margin under LGM-Dairy is different but more importantly LGM-Dairy is designed as a conventional insurance product. It is approved by the Risk Management Agency of USDA but sold through private agents, like any other crop insurance program. Perhaps most significantly, LGM-Dairy coverage levels and premiums vary from month to month depending on market conditions, unlike MPP-Dairy which always offers the same choice of coverage options at the same price.

A major limitation to the use of LGM-Dairy is that USDA could offer it at subsidized premium rates, relative to an actuarially fair premium, but it had a limited and relative small amount of money for subsidies. When that money ran out, the LGM-Dairy program had to be suspended until the beginning of the next fiscal year.

The Bipartisan Budget Act eliminates the previous and longstanding funding cap on premium subsidies for the livestock insurance products, including but not limited to LGMDairy. In and of itself this does not create new funding to support LGM premium subsidies but it creates an opportunity to expand funding for that purpose at a later date.

The U.S. Congress passed The Bipartisan Budget Act of 2018 as the culmination of a particularly difficult set of negotiations to provide ongoing authority for the federal government to pay its bills. This legislation primarily provides a budget framework that will subsequently allow Congress to approve a specific set of appropriations that will enable the federal government to pay its bills. The actual appropriations legislation still needs to be drafted, but the budget plan provides the blueprint for the specific spending approvals.

Beginning with the start of the Federal fiscal year on 1 October 2017, every member of Congress wanted to provide the legislative authority that is required for the government to spend money in support of its employees and programs, but there was considerable disagreement about how much to spend and on what. This created a political environment in which policies that really don’t have much to do with a spending plan became part of the negotiation. Funding for military programs and immigration related issues were at the forefront of these negotiations, for example.

The Appropriations Committees of the Senate and the House of Representatives are the starting points for establishing spending approvals for government programs, outside of the so-called mandatory programs, like Social Security, where payments are made based on eligibility not a fixed spending allowance. These spending approvals are essential for “discretionary” spending, including paying the salaries of federal employees. Although the authority of the Appropriations Committees is limited to establishing amounts of money that can be spent by government agencies for various programs and purposes, it is fairly common for members of Appropriations Committees to essentially modify or even create programs by assigning funding to do a certain thing in a certain way. This is sometimes referred to, in a not so complimentary way, as legislation by appropriation.

The Agricultural Act of 2014 created the Margin Protection Program for Dairy Producers. While it was certainly well intended, MPP-Dairy has not proven to be a particularly helpful or effective support for dairy farmers, who have suffered below average returns since 2015. In its first two years of operation, farmers paid $96 million in fees and premiums but only $12 million was paid in “indemnities”. Risk management experts would quickly point out that most people don’t take out insurance with the hopes of getting paid – you don’t want your house to burn or your car to be wrecked, but critics of the program would say, my house did burn and I didn’t get a payment. In the face of this rampant criticism, industry advocates and sympathetic legislators sought ways to make the program more helpful to dairy farmers. Unfortunately, this has proven very difficult in the normal course of generating a farm bill in the agriculture committees of the House and Senate simply because any changes that make the program more helpful necessarily make the program more expensive. Without specific approval to spend more money on MPP Dairy, the agriculture committees had no room to improve the program. A similar situation emerged with the cotton program that was established under the 2014 Agricultural Act.

Senator Patrick Leahy (VT-D) and Senator Thad Cochran (MS-R) are the Vice Chair and Chair of the Senate Appropriations Committee. Last Spring, they worked out a fix for the dairy and cotton programs that they could include in their committee’s appropriation legislation. This legislative language was included in the Bipartisan Budget Act that was just passed.

NMPF Appreciates USDA Step in Dairy Farmer Aid, Even as More Will Be Needed

USDA is buying products under the Food Purchase and Distribution Program Last week, a new USDA Foods vendor delivered 2,000 gallons of fresh milk to the D.C. Capital Area Food Bank. The delivery was one [Read More …]