Current News
Last week we published that CDFA announced a new date for the Chapter 3.5 quota hearing. The purpose of the hearing is for CDFA to seek guidance from an administrative law judge and members of the dairy community in answering: Can quota be eliminated using a lower producer voting threshold than previously used in the last referendum?

Below is a summary of voting scenarios to give dairy families an idea of different voting percentages and their impact under the Chapter 3.5 thresholds. Should there be a referendum on Chapter 3.5 (the chapter where QIP’s authority is located), different rules than what was used to approve the QIP would apply.

So what is the probability of quota making it through a referendum to eliminate it? Of course, nobody can predict the future. But we can make some assumptions and look at percentages of voters to give us an idea. The two tables here can do just that. The assumption we made for these tables (and this is an assumption we chose—not a personal guarantee of what people will do) is that quota holders would vote in favor of keeping chapter 3.5. Non-quota holders (we call them quota payers for these scenarios) would not.

The gray area represents not enough producers voting which means Chapter 3.5 goes away since 51% of producers must vote to keep 3.5 in place.

The numbers in the table are the percentage of producers voting. To take an example on how to look at the first table (which assumes producers with less than 15% of their milk covered by quota would vote no and those above 15% would vote yes): if 60% of quota payers voted and 75% of quota holders voted, this would equal to 66% of producers voting. This would clear the 51% required threshold. However, this would result in a ratio of 49% of quota holders within those who voted. A yes vote of 49% would not be enough to clear the 51% threshold of those who voted. Therefore, the cell is red, indicating Chapter 3.5 would likely be terminated.

This is based on January 2020 data and includes a total of 1,121 dairies. As a disclaimer, the total on that data set does not match exactly the total CDFA looks at during a referendum (joint ownership may result in one vote for two dairies for example) but it’s the closest look we have. 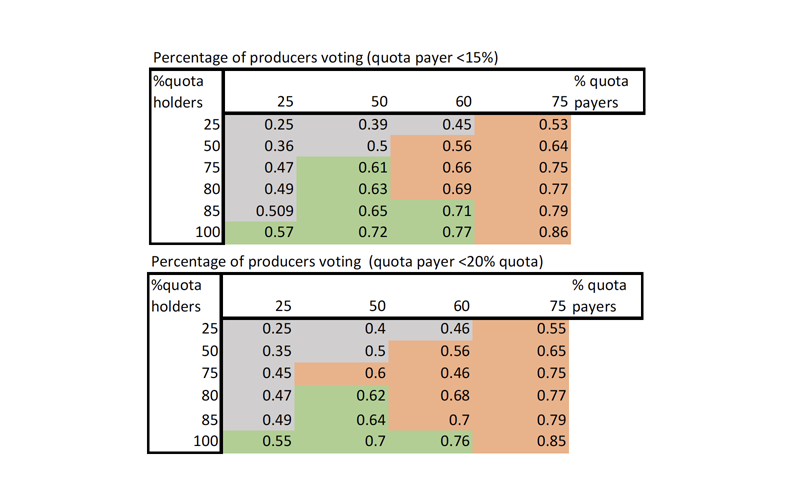 Note: If you are interested in testifying and would like assistance, please contact Annie (annie@wudairies.com). Western United also has a handy section on the website where you can easily submit your written comments directly to CDFA.

California farms lose up to half billion dollars to theft and other rural crime every year. Here are some steps you can take to make your facility less inviting to criminals… Highlights: What You Need [Read More …]

CDFA is accepting public comments on its draft Request for Grant Applications (RGAs) for the next round of methane reduction funding to be awarded through its Climate Smart Agriculture Incentives Programs. These programs include the [Read More …]

March 13 at Maddox Dairy in Riverdale Register now! http://www.holsteinusa.com/shows/judges.html From Holstein USA’s website: The one-day conference is tentatively scheduled from 8 a.m. to 4 p.m. and will include judging classes as well as classroom [Read More …]