A new economic impact report released by USDEC forecasts that without a strong U.S.-Japan trade treaty, U.S. dairy exports could lose $1.3 billion in sales over 10 years.

Australia and New Zealand have the Comprehensive and Progressive Agreement for Trans-Pacific Partnership (CPTPP) in place with Japan. On Friday, a Japan-EU Economic Partnership Agreement (JEEPA) is scheduled to take effect.

Where does that leave U.S. dairy exports to Japan?

The study, conducted by Tokyo-based Meros Consulting, can be downloaded here. It showed that without a strong U.S.-Japan trade treaty, competitors will seize a cumulative $1.3 billion in dairy sales over the next decade. That would climb to $5.4 billion once the agreements are fully implemented over 21 years, the report said.

The Japanese dairy market is valuable to the U.S. dairy industry, importing $291 million from U.S. exporters in 2017, the last year with complete data. Those strong 2017 sales were a 41 percent increase over the previous year.

The total made Japan the fourth largest market for U.S. dairy exports. Dairy demand, especially for cheese, is expected to continue.

Underscoring the importance of the Japanese market, four U.S. dairy farmers traveled to Tokyo as U.S. dairy ambassadors in November. All the farmers serve on the board of Dairy Management Inc., USDEC's parent organization. 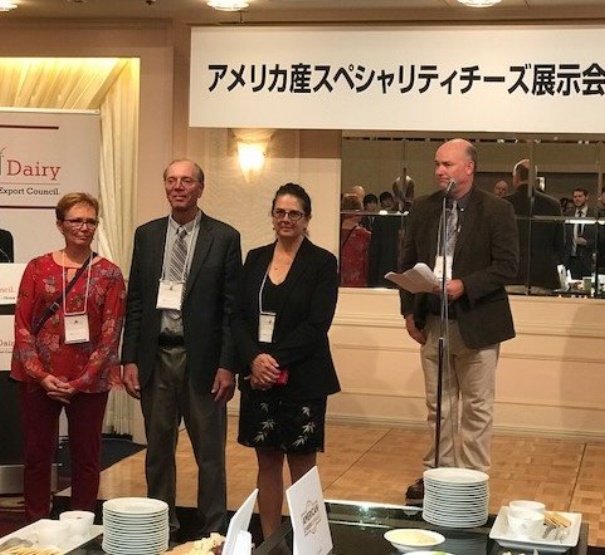 Brad Scott @udderdelite introduces fellow dairy farmers at USDEC reception for Japanese cheese buyers, customers & other members of dairy trade. In his remarks, Brad emphasized U.S. dairy farmers’ dedication to quality and their commitment to the Japanese market. #USdairyExports
The report quantified the same potential the dairy farmers saw in November.
Findings include:

USDEC and NMPF comments on report

“These agreements will give our competition a significant economic advantage that will enable them to increase their market share in Japan, costing the U.S. dairy industry billions of dollars in lost sales,” said Tom Vilsack, USDEC’s president and CEO, in a news release.

“U.S. dairy farmers and processors strongly support the Administration’s launch of trade talks with Japan. We hope this report provides fresh ammunition to our negotiators about why a strong U.S.-Japan agreement is so important for American agriculture.”

In its 97-report, Meros Consulting analyzed the impact on key U.S. dairy products and ingredients exported to Japan  It created charts showing what would likely happen if the CPTPP and JEEPA moves forward as planned while the U.S. remains without a comparable agreement.

Four of those charts are below.

"The potential upside for the U.S. dairy industry and U.S. economy underscores the need for the Trump administration and Congress to secure a strong trade treaty with Japan," said Jaime Castañeda, USDEC senior vice president. "These treaties need to significantly expand export opportunities for all our U.S. dairy products."

This Week in Dairy News (Video): Jaime Castaneda of the Dairy Export Council with insights on NAFTA and U.S. dairy trade