The following statement was released by American Farm Bureau Federation President Zippy Duvall: “China’s announcement that it will not buy any agricultural products from the United States is a body blow to thousands of farmers and ranchers who are already struggling to get by.

“In the last 18 months alone, farm and ranch families have dealt with plunging commodity prices, awful weather and tariffs higher than we have seen in decades.

“Farm Bureau economists tell us exports to China were down by $1.3 billion during the first half of the year. Now, we stand to lose all of what was a $9.1 billion market in 2018, which was down sharply from the $19.5 billion U.S. farmers exported to China in 2017.

“We are grateful for Market Facilitation Program payments many farmers and ranchers have received, allowing them to continue farming during this difficult time. Even so, we know that aid cannot last forever. We urge negotiators to redouble their efforts to arrive at an agreement, and quickly. Exports ensure farmers will continue to supply safe, healthful and affordable food for families here and around the world.” 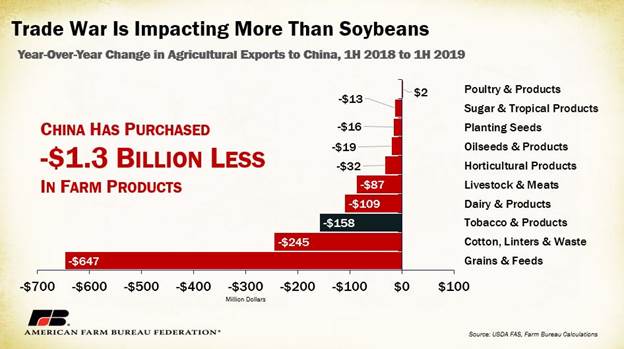 A Clancy-esque View of the Economy

Like a good Tom Clancy novel, there are a lot of storylines unfolding in the economy. Any one of these narratives may be the one to cause the collapse of the world as we know [Read More …]

Aspen Pharmacare is in talks to sell its global infant formula business, it said on Tuesday, as the South African drug maker seeks to cash in on growing demand for baby milk. The business sells [Read More …]