Trading volumes were light, but that led to a sense of foreboding. The rally is real, but how long can it last? The futures curve reflects traders’ fears that the market cannot sustain these prices into next year. 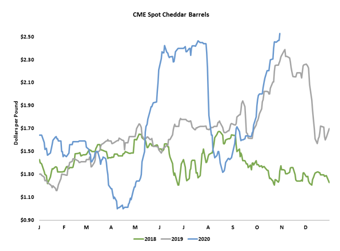 The cheese markets were spooked on Tuesday when CME spot Cheddar barrels suffered their first setback in over a month. But the fright turned to delight as barrels immediately began to climb again. They gained 7.5ȼ this week and reached $2.53 per pound, an all-time high. Blocks added a penny and finished at $2.7825. Cheese buyers remain wary of purchasing more than they need with prices at such hair-raising heights, but demand has been strong enough to keep a bid under the spot market. Trading volumes were light, with just two loads of blocks and six barrels changing hands in Chicago this week. That’s led to a sense of foreboding. The rally is real, but how long can it last? The futures curve – with each month trading sharply lower than the one before – reflects traders’ fears that the market cannot sustain these prices into next year. 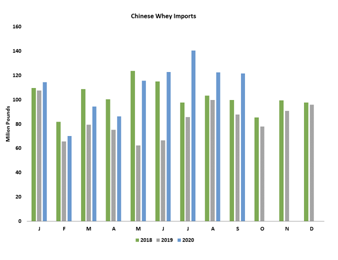 CME spot dry whey rallied 1.5ȼ this week to a nearly six-month high at 40ȼ. Whey protein products are priced to attract domestic customers, and whey powder is moving abroad at a respectable pace. China imported 121.7 million pounds of dry whey in September, nearly 40% more than last year, and the U.S. accounted for more than one-third of the total. In the first nine months of 2020, Chinese whey imports are 35% greater than during the same period last year, reflecting strong demand from China’s modernizing swine industry. 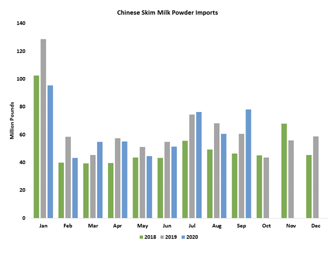 the first time in two years, Australia took New Zealand’s place as China’s top supplier of SMP, which suggests that the Kiwi cupboards were bare when the new season began. The U.S. also gained a bigger slice of China’s SMP pie, likely helped by the weaker dollar and lower pricing. Although China’s year-to-date milk powder imports lag last year’s formidable totals, they are still large in comparison to almost every other year. Resilient demand from Southeast Asia is helping to keep global milk powder inventories in check and to support global prices. American milk powder remains the cheapest in the world. CME spot nonfat dry milk climbed a penny this week to $1.1075.

U.S. butter is historically inexpensive and it’s getting cheaper by the day. CME spot butter slipped 4.5ȼ this week to $1.39. Aside from this year, the spot butter market hasn’t spent any time below $1.50, much 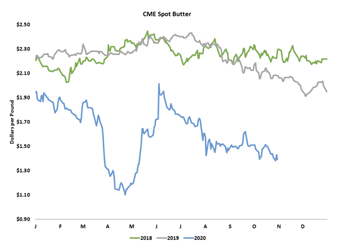 less $1.40, since 2013. Manufacturers are ramping up output of seasonal products like cream cheese and egg nog, but cream remains abundant. Hopefully, holiday demand will shatter expectations. If not, butter is likely to remain in the doldrums.

Modest gains in milk powder pricing were not enough to offset the butter slump. Class IV futures continued to slip. 2020 and early 2021 contracts lost a few cents, but Q2 contracts dropped 20ȼ or more. Class IV values are well short of the cost of milk production, with sub-$14 pricing until February 2021. 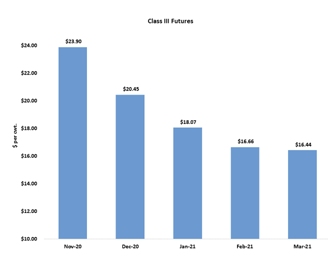 per cwt., within 70ȼ of the all-time high set in September 2014. But, unlike in 2014, Class I milk will be priced at the average of Class III and Class IV plus 74ȼ, rather than the “higher of.” So next month most dairy producers will earn a blend of November Class III around $23.90, Class IV near $13.63, and Class I at $18.04. The producer price differential will take a bite out of milk checks once again, but at least the Class I price will be noticeably higher than it was this summer.

The feed markets had already priced in all the good news regarding U.S. exports and the prospect of a sub-par South American crop. Immense pressure from outside markets – with a lot of red ink on Wall Street and a stronger greenback – and a lack of fresh fodder for the bulls weighed heavily on values. Harvest pressure also took a toll. There’s a lot of grain in the bin, but demand is much better than last year, so the back-and-forth in the corn market is likely to continue.

The Barrel Market is Ablaze Call the fire department! The barrel market is ablaze. The fire has been raging on LaSalle Street for more than a month. Buyers are in a panic, wondering when the [Read More …]

Summer is winding down, but the cheese markets are still sizzling. CME spot Cheddar blocks jumped a nickel this week to $1.93 per pound, the highest value since November 2016. Barrels climbed 7.25ȼ to $1.7375. [Read More …]

Dairy business relationships continue as the U.S. and Chinese governments hold high-stakes talks about tariffs and trade.  The China Chamber of Commerce of Foodstuffs and Native Produce (CFNA) has more than 6,000 member organizations devoted to agriculture, including more [Read More …]