CME spot Cheddar barrels climbed to an all-time high last Friday and managed to cling to the precipice on Monday. Then their perch gave way and they plunged over the cliff. 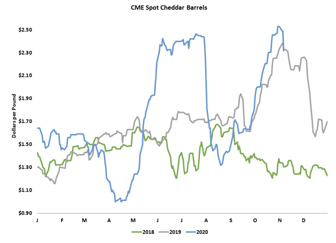 Cheese traders are likely disoriented by violent whiplash and a dose of déjà vu. Just as they did exactly a year ago – and three months ago to boot – CME spot Cheddar barrels tumbled from a great height, undoing the final stages of a spectacular multi-month rally. Barrels climbed to an alltime high of $2.53 last Friday and managed to cling to the precipice on Monday, but then their perch gave way. They spent the middle of the week inching lower, feeling about for a safe spot to rest. But today, they plunged over the cliff, dropping 17ȼ and landing with a thud at $2.3175 per pound. That’s 21.25ȼ lower than last Friday’s record high. Blocks slid throughout the week and lost even more ground. They closed today at $2.3425, down 44ȼ from last Friday.

Fresh cheese is clearly not as scarce as it once was, and supplies are likely to grow. U.S. cheese output reached nearly 1.1 billion pounds in September, up 1.1% from a year ago. Cheddar output jumped 7.7% year over year to the highest September volume on record. Meanwhile, orders for cheese in USDA’s food 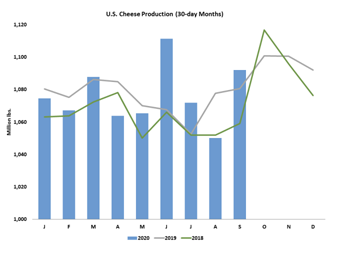 box program are winding down. Funding and product volumes for November and December are lower than in previous rounds, and there are currently no plans to expand the donations beyond the end of the year.

U.S. cheese exports outpaced the prior year in September by 3.7% thanks to resilient demand in Southeast Asia. For the second time this year, South Korea beat Mexico to become the largest market for U.S. cheese. Despite several bouts of sky-high prices, U.S. cheese exports in the first nine months of the year are 3% greater than the same period in 2019. 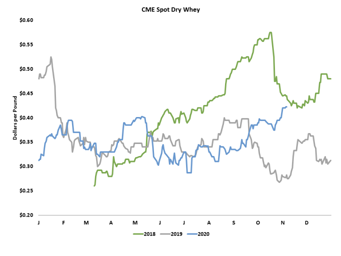 Whey product exports also impressed. The U.S. sent big volumes of dry whey and whey protein concentrates (WPC) abroad in September, helped by robust demand from China. China is buying whey to feed to piglets and WPC for infant formula. So far this year, U.S. exports of WPC with at least 80% protein to China are up 69% compared to last year. Foreign demand for WPC and whey protein isolates pulled whey away from driers in September. Production of dry whey for human consumption fell 17.9% from the prior year, and whey stocks declined accordingly. Tighter supplies have translated to higher prices. This week CME spot dry whey climbed another 2.25ȼ and reached 42.25ȼ. 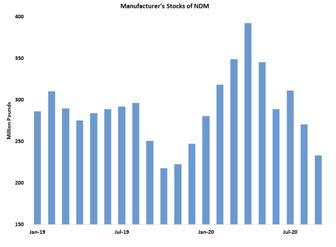 U.S. milk powder exports slipped to 136 million pounds in September. That’s strong compared to most years at this point on the calendar, but it’s well below the volumes that prevailed all summer and down 5.9% from the strong shipments reported in September 2019. Sales south of the border remained light, falling 33% year over year.

stockpile down by an astounding 40.6%. That helped elevate NDM prices in September and much of October, but now they are in retreat. CME spot NDM fell 4.25ȼ this week to $1.065, and SMP dropped 4.4% at the Global Dairy Trade auction on Tuesday. 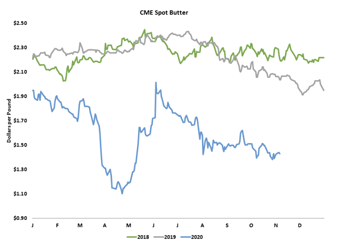 The U.S. churned out 152 million pounds of butter in September, the highest total ever for the month. That was 5.4% more than in September 2019. The markets had already priced in the abundance. This week CME spot butter rallied 4ȼ to $1.43, which is still historically inexpensive.

The collapse in the cheese market prompted a steep drop in nearby Class III prices. The November contract fell 70ȼ to a still-high $23.20 per cwt. December Class III dropped $1.75 to $18.70. January fell hard too, but the other 2021 contracts were mixed, as the markets have long known that $2.50+ cheese was unsustainable. Most Class IV contracts lost between 10 and 30ȼ this week. That puts November through February Class IV south of $14, well below dairy producers’ cost of production.

Around the world, milk output is on the rise. But there are signs of trouble in New Zealand and South America, where dry weather is slowing pasture growth and raising costs. That may help to trim global

milk production at the margins. But demand is the greater concern. The pandemic is restricting economic advancement and making consumers wary. That’s likely to restrict dairy consumption at home and abroad.

The feed market bulls had plenty of fodder to digest. USDA reported another strong week of corn and soybean exports. The weak dollar gave commodity markets a boost and made U.S. grains even more attractive to foreign buyers. And South American is in the throes of a dry spell, leading to speculation that the U.S. will remain the best market for a bit longer.

With that, the soybean market came roaring back. January soybeans established a new life-ofcontract high yesterday and closed today at $11.015 per bushel, up more than 45ȼ for the week. Soybean meal and corn logged more modest gains. December soybean meal climbed $4.80 to $382.40 per ton. December corn rallied 8.25ȼ to $4.0675.

New Zealand is home to some 10 million cows, about double its human population New Zealand plans to slaughter about 150,000 cows as it tries to eradicate a strain of disease-causing bacteria from the national [Read More …]