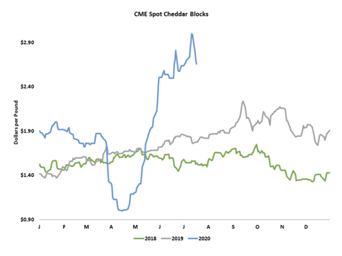 CME spot Cheddar blocks came charging out of the gate this week. On Monday they sprinted 8.5ȼ straight uphill, to a record shattering $3 per pound. Their journey to that point is an astounding feat of strength and stamina. In fewer than three months, blocks climbed $2, from a 17-year low to a record high, with barely a pause for breath along the way. But $3 is clearly high enough. On Tuesday, blocks took a small step back from the peak. On Wednesday, they plummeted 19ȼ without a single bid to cushion their fall. Blocks settled today at a still lofty $2.66 per pound, down 34ȼ from Monday’s high and down 25.5ȼ from last Friday. By the end of the week, prices had fallen far enough to attract buyers, with two loads changing hands Thursday and five on Friday. These orders reassured futures traders that demand remains intact and muted the late-week losses for cheese and Class III futures.

Barrels also helped to undergird the futures market. Aside from a small misstep on Thursday, they moved quietly but steadily upward and closed at $2.43, up 9ȼ this week to the highest value in nearly six years. Although restaurant orders have once again 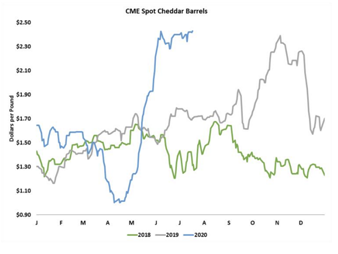 retreated, retailers are still stocking up on cheese and USDA’s donations to food banks continue apace. USDA’s Dairy Market News reports that demand is strong, but some buyers are going hand-to-mouth, in hopes that the recent selloff will continue. Cheese vats are full to the brim.

More cheese means more whey, and buyers know it. They are getting pickier on pricing, and USDA reports lower values around the country. Nonetheless, both the futures and the spot market gained ground this week. CME spot whey climbed 4.75ȼ to 33.5ȼ per pound.

As blocks deflated, the air seeped out of Class III futures. However, the late arrival of buyers in the block market and advances in barrel and whey pricing helped to patch up the major holes, allowing for a slow leak rather than an all-out collapse. Most Class III 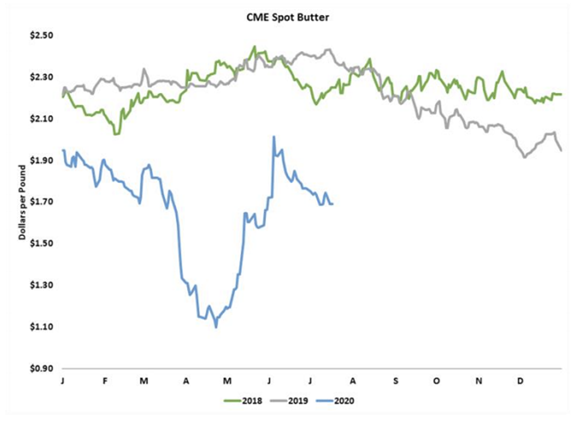 futures contracts lost around 20ȼ. The August contract dropped 55ȼ to $22.49 per cwt. Class IV futures also finished roughly 20ȼ to 30ȼ in the red, but they are far removed from the exalted realms of their Class III counterparts. August Class IV dropped 40ȼ this week to $14.05.

CME spot butter jumped early in the week but just as quickly faded. It finished at $1.69, steady with last Friday. Restaurant closures are weighing on demand, and production is ample despite relatively pricey cream.

CME spot nonfat dry milk (NDM) slipped 1.75ȼ this week to $1 per pound. Cheesemakers are adding gobs of NDM to their vats, but sales to other users have slowed. Skim milk 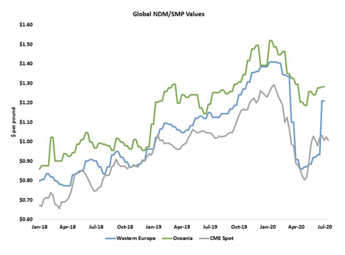 powder (SMP) prices are rising abroad, and the dollar is losing ground, making U.S. NDM exceptionally competitive. However, sales south of the border are intermittent, as the pandemic drains the vigor from the Mexican economy.

Dairy producers rushed to the mailbox this week to open and hastily cash their June milk checks. In the Class III regions, they – and their creditors – were likely elated. Elsewhere, however, dairy producer revenue was severely watered down by de-pooling and the much lower Class IV market. Sky-high milk prices are encouraging dairy producers

to top up their tanks, but for some, the payout is much lower than they had hoped. The feed markets were mixed this week. September corn futures fell 3.25ȼ to $3.33 per bushel. August soybeans rallied 11ȼ to $8.98. The forecast is generally favorable, with scattered rains across the Corn Belt next week. But farmers in the Southern Plains and southwestern Corn Belt could see a little less moisture than they would like. This year’s crop will likely be respectable but not perfect, which will provide more than enough grain and oilseeds to meet demand.

The soybean markets got a boost this week from rising global vegetable oil prices and from another round of sizable Chinese purchases. China is buying U.S. corn too, but there is less potential for Chinese demand to meaningfully reduce U.S. corn inventories. Chinese buyers could soon exhaust the nation’s self-imposed tariff-rate quotas (TRQs), and all corn purchased outside of this year’s quota will suffer a stiff border tax. Unless China chooses to waive the tariffs, Chinese purchases of U.S. corn are likely to be helpful but far from transformative. The U.S. is likely to have far more corn than it needs.

Original report can be found at: https://www.jacoby.com/market-report/cme-spot-cheddar-blocks-charged-out-of-the-gate-this-week/

President Trump recently announced that the U.S. would impose tariffs on steel and aluminum imports.  Extra tariffs of twenty-five percent are being placed on steel and ten percent on aluminum. These tariffs went into effect today. Certain [Read More …]

Progress on China Phase One Agreement

Perdue: this agreement will produce positive gains for the entire economy U.S. Secretary of Agriculture Sonny Perdue announced Tuesday that China has continued its progress in implementing the U.S.-China Phase One Economic and Trade Agreement [Read More …]