Introduction
Biogas traditionally produced in the US by manure-based anaerobic digester (AD) systems has been used as a fuel source for engine-generator sets to produce renewable electrical energy. Recent changes in the value of renewable natural gas (RNG) stemming from California’s Low Carbon Fuel Standard (LCFS) has resulted in farms seriously evaluating the use of biogas for RNG production. The Federal Renewable Fuel Standard for transportation fuels also has provisions for dairy-derived RNG. Many considerations need to be made as part of the due diligence process in considering a possible change. This document provides background about the economics driving possible changes by farms, basic details about how value is assigned for RNG when used as a transportation fuel (nationally and in California), and estimates of the quantity of biogas a farm may have for processing into RNG once the parasitic thermal demand of the anaerobic digester is met.

Hilarides Dairy in Lindsay, California and Prairie’s Edge Dairy in Fair Oaks, Indiana are using cleaned, compressed dairy-derived RNG as a transportation fuel for their milk truck fleets. Prairie’s Edge Dairy uses on-farm ADs to produce biogas, which is then refined and compressed to RNG, and piped to one of two CNG/RNG filling stations in the area. The farm and its associated trucking company, partnered with the Indiana “Clean Cities” coalition and used federal Recovery Act funding to increase the alternative fuel usage in the state. Other reported goals of the project were to reduce trucking fuel costs and similarly, to reduce trucking-related GHG emissions from the standard use of diesel fuel. The trucking company committed to the project by converting the entire 42-truck fleet of Class 8 semi-tractors to run on CNG. The dairy products produced by the farm are distributed to various points-of-sale across the country, all with the use of the RNG powered trucking fleet.

Background
Current engine-generator set operation and maintenance costs range from $0.03 to $0.05/kWh generated. The low realized value, $0.02 to $0.04/kWh, of the surplus energy generated may encourage farms with existing AD systems to stop generating electricity. Biogas may be used to replace natural gas; however, it has to be cleaned and likely compressed for a direct replacement. Raw biogas is composed primarily of methane (55–60%), carbon dioxide (35–40%) and water vapor (3–5%) plus a host of trace constituents (<1%). To refine the raw biogas to vehicle (or pipeline) grade, carbon dioxide, hydrogen sulfide, water vapor (if the gas is injected into a pipeline) must be removed. Gas specifications (which may vary by use or pipeline operators) can limit the water content (to less than 7 lbs. of water/mmBtu) and other impurities. Gas clean-up is accomplished by transferring raw biogas from the AD to a gas-cleaning skid that creates a nearly pure stream of methane (RNG), which is chemically very similar to fossil natural gas. Clean gas compression follows, with pipeline injection pressure requirements varying and RNG fueled vehicle requirements as high as 3,400 psi. RNG has a higher methane concentration per unit of volume than raw biogas, which makes it virtually equivalent to conventional natural gas and thus a suitable energy source in applications that require pipeline-quality gas. Like conventional compressed natural gas (CNG), compressed RNG can be used as a transportation fuel to replace CNG or liquefied natural gas (LNG).

RNG qualifies as an advanced biofuel under the Renewable Fuel Standard (AFDC, 2017).The RFS/RFS2, required by the Energy Independence and Security Act of 2007, requires that transportation fuel sold in the United States contains a certain volume of renewable fuel. However this requirement is subject to political change. More information is available at: https://www.epa.gov/renewable-fuel-standard-program.

Valuing and Current Value of RNG
A Renewable Identification Number (RIN) is the “currency” of the RFS2 program; RIN credits are used to demonstrate compliance with standards. RINs can be sold to satisfy the requirement of the RFS2 program. However, the value varies for different renewable fuels based on specific criteria for the type and source of the renewable fuel. The value can change based on supply and demand as well as political forces, and as such has varied considerably. An example of this is shown in Table 1 where RIN values for the months of February 2017 and May 2018 are compared. More information is available at: https://www.epa.gov/renewable-fuel-standard-program/renewable-identification-numbers-rins-under-renewable-fuel-standard.

To become an approved RFS production facility requires a thorough registration process. It has also been reported that traditionally it has been difficult to obtain long-term or fixed-price contracts to sell RINs.

California’s LCFS is a regulatory framework to reduce greenhouse gas (GHG) emissions in the state. The program encourages the use and production of a variety of low-carbon and renewable alternatives to high carbon petroleum-based fuels, including RNG. The goal for LCFS is to reduce the carbon intensity (CI) of California’s transportation fuels by at least 10 percent by 2020. The CI of a fuel accounts for the life cycle carbon dioxide emissions. The CI for biogas may range from -100 to 24 gCO2e/Mega Joule (MJ) (One MJ = 948 Btu) depending on the baseline GHG emissions and the efficiency of the AD system. Several pieces of information about the farm are required, with the focus on farm energy use and energy production, to complete a complex spreadsheet that determines the farm’s CI value. When a RNG has a very low CI it has a high trading value. The LCFS price range in June 2018 was $94 to $185/MT. Additional credits apply for food waste generated biogas (D5) of from $5/mmBtu to $18/mmBtu and for animal waste derived biogas (D3) of from $9/mmBtu to $30/mmBtu depending on the specific process. This additional value may be obtained even from NY AD producers by using the LCFS credits if the RNG can be injected into a national pipeline system. Any prices received for RNG may have to be shared with developers and/or marketers. To qualify as an approved production facility under the LCFS requires a complex life cycle analysis using verifiable data from the specific facility. These credits vary in price by supply and demand, are subject to political changes, and are only authorized through 2024 at this time.

Net biogas available for clean-up/compression to RNG
An efficient digester using only dairy manure as the source of volatile solids (D3) may produce a gross amount of biogas with a heating value of 19.6 mmBtu/cow-year. Modern electrical generation equipment can convert this thermal energy into approximately 1,950 kWh/cow-year (eng-gen efficiency of 38%) for use in operating the farm and sale of surplus to the utility.

Just as there are efficiency losses converting biogas to electricity, there are potential losses converting biogas to RNG. Additional biogas and associated kWh’s can be produced by co-digestion of food waste(s), however this would shift any RNG produced to a D5 value. When producing RNG, in most cases, some of the raw biogas is needed to fuel a boiler in order to meet the parasitic heating load of the digester.

If the sale of RNG is profitable, then the biogas production from the AD should be optimized to increase profits. Careful control to maintain the digester temperature maximizes methane production. An example of the percent of the biogas produced needed to meet the heating demand of a representative NYS AD, assuming demand is met by using raw biogas to fuel a boiler that has a 90% conversion efficiency, is shown in Table 2.

Other sources of heat for the AD should be considered to reduce the parasitic heat load including continued use of a combined heat and power (CHP) engine-generator set, heat recovery from gas compression, tail gas combustion, and heat exchange from the AD effluent. The CHP engine-generator set may be used to offset the parasitic electric needs of the gas cleanup system.

Capital Costs
Estimates of the cost of the clean-up skid start at $300,000 depending on the capacity and the efficiency of the process. High efficiency units will collect more of the methane and have less tail gas. Economies of scale will determine the viability of this process depending on biogas production. If RNG is to be compressed on-farm, consideration for the capital cost of the compression system is needed. 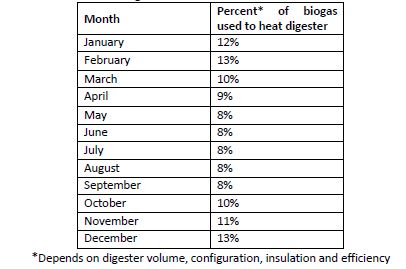 Operating Costs
Gas cleanup equipment has an additional parasitic electrical demand above that of operating the digester system. Annual operating costs for biogas cleanup can range from $9,500 to $16,400 depending on the type of system and the pressure needed. Annual operating costs for the gas cleanup, including compression, can range from $23,000 to $80,000, again depending on the type of system, the gas concentration specifications and the compression level needed for utilization.

Natural Gas from Dairy Manure is on the agenda In collaboration with academic, industry, government and NGO partners, Energy Vision will host a half-day workshop in Saratoga Springs, N.Y., on the production and use in [Read More …]