In today’s economic climate profitable farms target management practices on crops, cows, cash and conservation or the 4C’s. People often ask if there are commonalities in the high profit herds, such as super forage quality or high milk production. Unfortunately, it is not that straightforward or simple. Based on a decade of on-farm research projects and extension programs focused on both financial and production practices, it is the attention to the whole farm system that leads to success. High profit dairies have a system in place that works regardless of external obstacles, such as weather or market conditions, that impact their operation.

Producing high quality forage is the foundation of building rations that will optimize animal performance. The problem is that forage quality alone does not guarantee animal performance or herd profitability. The Extension dairy team’s project Crops to Cow evaluated corn silage quality based on the herd’s profitability. The neutral detergent fiber (NDF) content and its digestibility and starch content and its digestibility were compared over high, medium and low profit herds. It was noteworthy that the two years this project was done, 2016 was a drought year and 2017 was a high moisture year. All farms regardless of profit status experienced the same impact on their corn silage. In the drought year all farms observed higher corn silage NDF and NDF digestibility, and lower starch and starch digestibility compared to 2017’s wet weather (where it was reversed). On average, the high profit herds were feeding similar quality and quantities of corn silage compared to the other profit groups.

Feeding management and animal performance were evaluated at two time points throughout the year on the Crops to Cow project. The high profit group tended to have higher milk production compared to the other profit levels. However, looking at the standard deviation among the herds, there was a substantial range. The high profit herds had more operations above 90 pounds per cow average where the medium and low profit groups had herds below the 70 pound per cow average. All herd performance was affected similarly based on the differences in corn silage quality for 2016 and 2017. Milk production and components were negatively impacted by the wet year silage compared to the drought year with the low profit herds affected the most. Dry matter intake efficiency was very similar among all profit levels. There were also similarities in the rations as far as the other forages and grains fed between the profit groups. There was no special feeding approach that stood out as being ideal for high versus low profit herds.

Three quarters of the herds utilized double cropping and small grain silage in the lactating cow diets. This conservation practice has gained a lot of momentum with producers seeing benefits in animal performance and nutrient management. The amounts fed among the profit groups were very similar. There was a substantial difference in yield with the high profit herds averaging over 8 as-fed tons/acre compared to the low profit herds averaging 5.5 as-fed tons/acre. This has a significant effect on the cost per ton as well as overall feed inventory. It does appear there is opportunity for improvement in this conservation practice. Overall considering the results from the Crops to Cow project, there is no one single aspect related to the cropping program, cow management, cash flow, or conservation that will determine an operation’s profitability.

Goal – Compile financial data for the operation and itemize expenses based on the various crops grown on an annual basis.

Step 1: Using the Penn State Excel spreadsheet, enter the rations for all animal groups that are representative of the year. Confirm that inventory needs match storage capabilities.

Step 2: Enter in acres and yields per crop. Check that yields match with storage and feed out.

Step 4: Check that total expenses for direct and overheads match with the operation’s year end analysis.

Step 5: Compare home-raised feed costs with market costs. If actual costs are too high, work with a consultant to examine time management and agronomic factors limiting yield and efficiency.

Monitoring must include an economic component to determine if a management strategy is working or not. For the lactating cows, income over feed costs is a good way to check that feed costs are in line for the level of milk production. Starting with July 2014’s milk price, income over feed costs was calculated using average intake and production for the last six years from the Penn State dairy herd. The ration contained 63% forage consisting of corn silage, haylage and hay. The concentrate portion included corn grain, candy meal, sugar, canola meal, roasted soybeans, Optigen and a mineral vitamin mix. All market prices were used. 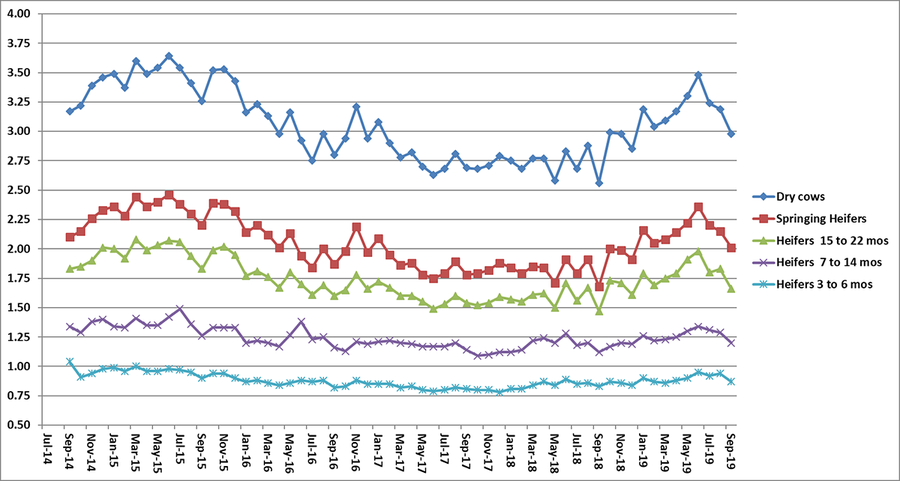 How to keep your livestock cool

Farmers use a livestock heat stress index (a combination of heat and humidity) to determine when heat stress could create a problem for their animals. But don’t want until temps reach the danger zone to [Read More …]

Jump with Jill set to rock with dairy farmers in Wisconsin

Work of dairy farmers and their cows takes center stage Thanks to the Dairy Farmers of Wisconsin, the rock & roll nutrition assembly Jump with Jill is heading to five elementary schools across Wisconsin during National Nutrition Month this [Read More …]