Cheesemakers are still going strong, and spot milk continues to move in the Midwest. However, demand is lackluster with foodservice outlets pulling back on orders in some areas. 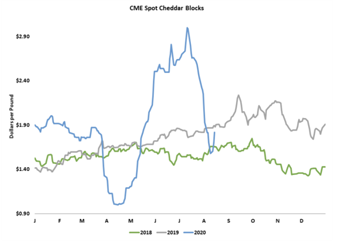 Like summer road trippers with subpar map-reading skills, the cheese markets moved confidently in one direction, and then abruptly changed course. Until Tuesday, they continued their historic descent from $3 per pound all the way to $1.58. But on Wednesday, they made a sharp U-turn and sped upward. Spot Cheddar blocks closed today at $1.82, up 11.5ȼ for the week. Barrels bounced back from early-week lows, but still finished 1.75ȼ lower than last Friday, at $1.50. Cheesemakers are still going strong, and spot milk continues to move at a discount in the Midwest. Demand is lackluster, with foodservice outlets pulling back on orders in some areas.

Around the nation, gyms are closed or sparsely populated, and sales of high-protein recovery drinks are sluggish. Whey values continue to languish near 30ȼ per pound, a price which signals oversupply. CME spot whey regained a little ground this week, climbing a half-cent to 32.5ȼ. 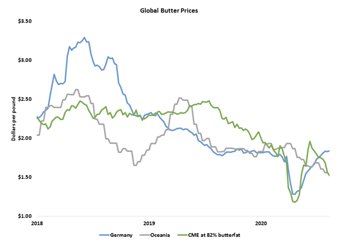 While cheese took the elevator straight down and then straight back up, butter took the stairs. Its progress is slower and less consistent, but it is still moving inexorably downward. CME spot butter lost 4.5ȼ this week and closed at $1.485. U.S. butter values are increasingly competitive in the international arena, which at the very least should slow the flow of butterfat to our shores. However, domestic demand remains uninspiring.

The milk powder market moved this way and that but ultimately finished a penny higher than last Friday at 96.5ȼ. USDA’s Dairy Market News reports that demand is fair. Milk powder production has slowed seasonally in some regions, but there is still plenty of milk for driers.

The recovery in cheese and whey pushed Class III values sharply higher this week. Most 2020 contracts gained between 50 and 90ȼ. Even so, September closed at $16.88, well below the recent highs. Class IV futures rallied too, but the advance was more moderate; most contracts added between 20ȼ and 50ȼ. August through October Class IV futures remain below $14 per cwt.

It’s still summer, but weeks of mild temperatures have allowed milk yields to inch higher in the Midwest. And by all accounts, the nation’s barns and parlors are full. Dairy slaughter is in the doldrums. Since Memorial Day, dairy producers have culled 46,000 fewer cows than during the same period in 2019, a decline of 9%. The dairy herd is likely growing, and there will be milk in abundance this autumn. The back-to-school boom in fluid milk demand is a bit of a bust, with most students learning from home at least part of the time. Data tracker Burbio estimates that 52% of U.S. K-12 public school students will begin the school year virtually, while a share of the remainder will be in a classroom only part of the time. A severely diminished football season is also likely to cut into dairy product sales, as football fans will probably consume less pizza and fewer nachos this fall. Coronavirus continues to sicken dairy demand. 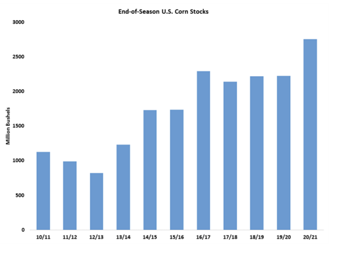 The feed markets faded to historic lows early in the week, ahead of USDA’s monthly World Agriculture Supply and Demand Estimate (WASDE) report. As expected, the agency forecast a record-breaking national average corn yield at 181.8 bushels per acre. Although USDA raised its demand estimates, we cannot use up enough corn in the form of feed, fuel and foreign sales to make a dent in the massive crop. USDA projects that at the end of the season, in September 2021, there will still be nearly 2.8 billion bushels of corn in the bin, the highest end-of-season corn stocks since 1988. USDA assessed the national average bean yield at 53.3 bushels per acre, much higher than the trade anticipated. This year’s crop will likely be a little smaller than the record-breaking harvest of 2018-19, but it’s still going to be a bin buster. 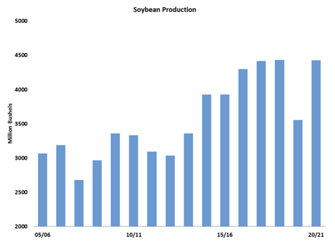 The WASDE should have pushed the markets decidedly downward. Instead, both corn and soybean futures gained ground on Wednesday and leapt enthusiastically on Thursday. September corn futures settled at $3.245 per bushel, up 17.5ȼ from last Friday. September soybeans climbed 31.75ȼ to $8.97. It seems that everyone who might have a reason to sell feed futures had already done so. Wednesday’s rebound sparked a shortcovering rally. USDA added fuel to the fire Wednesday evening, when it published acreage data from the Farm Services Agency (FSA). Taken at face value, the data suggest that USDA’s corn and soybean area projections are millions of acres too high. However, this is likely an administrative issue. FSA’s August acreage data is often incomplete and misleading, and this year it is especially so, as short-staffed government offices are scrambling to process a wave of farmer filings they received much later than normal. Nonetheless, the FSA numbers fanned the flames of Wednesday’s rally into a full-fledged conflagration.

Concerns about the impact of powerful derecho winds in central Iowa also gave corn values a boost. The storm devastated some of the nation’s finest farmland, snapping corn stalks and smashing grain bins to smithereens. While the aftermath is heartbreaking for those who suffered damage, significant crop losses were likely limited to a relatively narrow swath. The blight is likely only a blip in an otherwise excellent national crop. There will be more than enough grain to go around this fall.

Sunshine fuels corn’s ability to grow strong and perform. Putting the sun to work for farmers, Agnition developed Procure® for Corn to enhance the crop’s ability to capture energy from the sun, maximizing yields through [Read More …]