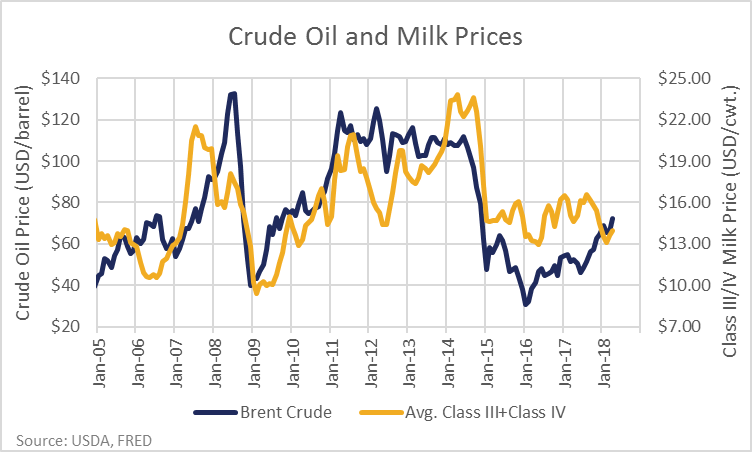 A lot of people will throw an oil price and dairy prices on a graph together and argue that there is a strong connection. There is strong correlation, but I struggle to find the exact causation. If you think about it from a global perspective, rising oil prices basically transfer wealth from oil importers to oil exporters. Historically the US, EU and Japan have all been large net energy importers and also large dairy consumers. When oil prices were near their peak there were a lot of people arguing that high oil prices were hurting domestic demand in the US (and likely EU and Japan as well), which would offset at least some of the increased demand from oil exporting countries.

It’s possible that the marginal-propensity-to-consume-dairy is higher in those oil exporting countries than it is in the US/EU; meaning maybe one less dollar of disposable income in the US only hurts domestic dairy sales by a penny per hundredweight while an extra dollar of disposable income in the oil exporting countries generates two cents per hundredweight of additional dairy spending. There is some evidence for this as our estimated income elasticities of demand are larger for the developing countries than the US/EU, but domestic consumption in the US+EU is 12 times higher than the combined consumption of Algeria, Angola, Iran, Iraq, Kuwait, Nigeria, Saudi Arabia, and the UAE. So for every 1 penny less sales in the US/EU from higher energy prices, we would need to see a 12 cent increase in sales into those countries just to hold global consumption steady and we simply don’t see those kinds of swings in consumption in the oil exporting countries.

There have been some who have proposed thresholds. High energy prices don’t affect US/EU consumption until they rise above a certain level while consumption in the net energy exporting countries is improving as oil prices rise, but stay below the threshold. Maybe there is some truth in this, but I’ve never seen anyone provide an analysis with actual data showing this.

You often hear people argue that it is governments that are using the oil revenue to buy or subsidize food prices. I know there is some of that going on, but I don’t know exactly what percentage of imports into various countries are being done under government control. I also don’t know what percentage of each government’s revenues come from oil, or whether oil revenue is earmarked for certain programs or if it all goes into a general fund that gets used for many different things. There might be a direct connection between the oil revenue, the government, and dairy import quantities, but I’ve never seen anyone be able to clearly lay that all out. On top of that, many of these countries are trying to nurture a domestic dairy industry. Just because they have/had a bunch of oil revenue doesn’t mean they will go out, import a bunch of dairy products and sell/give them to the public at discounted prices. That would hurt demand for domestically produced milk/dairy and you can bet that those domestic industries would be lobbying the government against it.

Another thing to keep in mind is that, despite their economies being weighted toward oil production, they do have other industries. For instance, the average Brent crude price in 2015 was down 47% from 2014, but Algeria’s real GDP growth was a positive 3.8%, Iran +3.2%, Saudi Arabia +3.7%, and UAE +3.3%. So a big drop in oil prices doesn’t necessarily cause a significant contraction in their economic activity. Part of the reason their growth didn’t collapse was the use of savings built up in the good years, so it’s possible the impact on dairy imports wouldn’t show up until 1-3 years later (or whenever the funds run out). But if you shift the oil-price-versus-dairy-price chart by 1-3 years, then it looks like there is no correlation between dairy and oil.

With all that said, higher oil prices do result in higher dairy prices in my global model. We model import demand for each of the top 31 dairy importing countries. The models tie import demand to population, GDP, dairy prices, oil prices and other country specific variables. If I hold everything else steady, a 10% change in oil prices results in a 2.5% change in equilibrium dairy prices. So crude going from $70 to $77 would get you about $0.40/cwt on milk. However, I think it is a bit of a historical fluke that dairy prices do line up pretty well on a graph against oil prices. Imagine a scenario where oil was $20 barrel, but there is a serious bovine disease outbreak and we had to kill half the cows in the US. Dairy prices would skyrocket even with oil at very low levels and we would have a pretty marked divergence between dairy and oil on the graph. Oil would still have an impact in this scenario. If it went from $20 to $40 it would push dairy prices even higher, but the lines on the graph would no longer line up so well.

Oil prices do impact the demand for dairy products globally, but exactly how the money flows from a barrel of oil through to increased purchasing of dairy commodities is still a bit of a mystery to me.

Nate Donnay is the Director of Dairy Market Insight at INTL FCStone Financial Inc. – FCM Division and has been applying his interest in large complicated systems and statistical analysis to the international and U.S. dairy markets since 2005. As a consultant, he has worked with clients at all levels of the dairy