One important lesson we’re taught in high school science class is the adage that “correlation is not causation.”

One example is the commonly reported, “milk is losing market share to plant-based beverages,” which implies that nut-flavored water is winning a one-on-one-battle with milk. It’s true that per-capita fluid milk consumption has declined. It’s also true that beverages made of almonds, oats, and other crops have entered the dairy case. But is the market share relationship as directly A-to-B as a plant-based industry lobbyist would like you to think? To consider:

First, let’s look at market share. Today, milk still outsells plant-based imitators by a margin of more than 11 to 1:

Also, remember that as new beverages enter the market, the marketplace segments. Consumption of established beverages tends to decline as competitors take up shelf space. It’s easier to grow from a smaller base than a larger one. Despite that dynamic, milk is holding up better against new entrants than some other established beverages. For example, here’s the trendline for milk compared to orange juice. 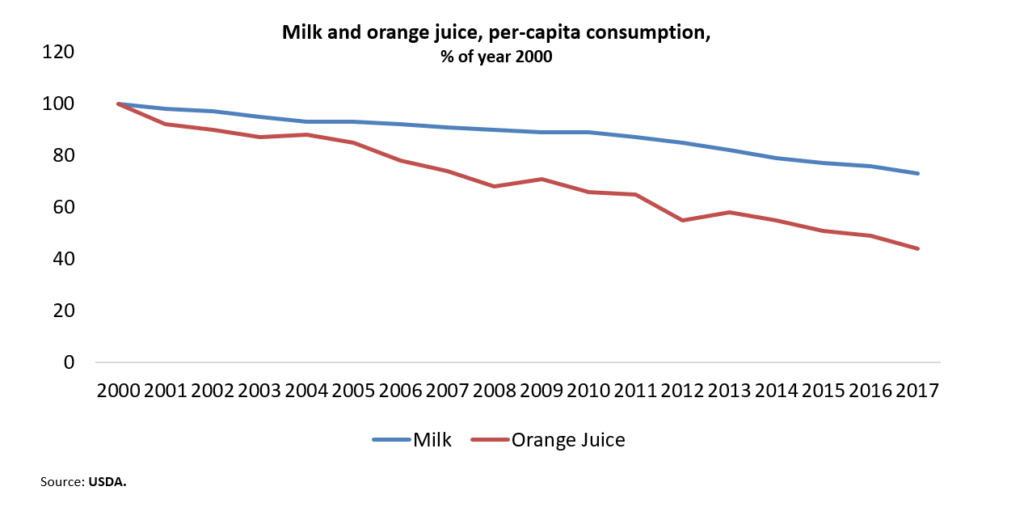 So, if plant-based beverages aren’t the main factor affecting fluid milk’s market share, what is? The truth is it’s one of the food industry’s biggest “innovations” of the 21st century – convincing consumers it’s better to buy water in a bottle than to drink it for free from a tap. 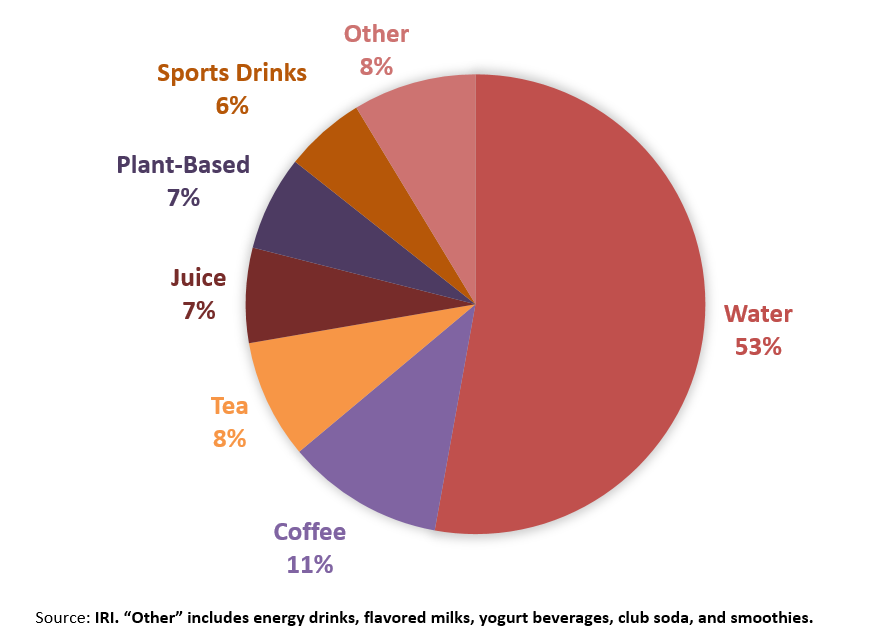 According to a 2017 study by IRI, about 82 percent of lost sales volume for white milk came from consumer switching, with most of the rest from lower overall beverage consumption. Of the volume lost to switching, 53 percent of milk went to bottled water (unfortunate, in light of the recent study showing that milk is better than water for hydration). More than a quarter of the rest went to coffee, tea and fruit juices. Plant-based beverages were in a lowly fifth place, accounting for 6.6 percent, with another 4.3 percent going to other dairy beverages, such as flavored milk or yogurt. That’s enough to alert an industry already passionate about nutrition and labeling integrity, but far from the breathless hype some in food marketing and food media would have you believe.

The decline in fluid milk consumption remains a dairy-industry concern, even as total dairy-product use reaches its highest per capita levels since 1962. With leading medical and nutrition organizations recommending only milk or water for children under 5, and with a natural product tailor-made to prevent numerous common vitamin deficiencies, milk remains essential for many diets. The sad truth is consumers lose out when they make an inferior choice (especially when they don’t realize it), and we’re working hard to protect milk’s strong consumer reputation and make its merits clear when compared to the competition.

But any argument that ties milk-consumption trends to an imaginary mass switching to plant-based beverages misses most of the story. One might even suspect the only reason this narrative exists at all is because plant-based imitators have gotten away with calling their products “milk,” contrary to federal regulatory definitions. The imitations are sincerely flattering, in a way. But when it comes to comparing market share, don’t let them flatter themselves.

The National Milk Producers Federation is urging farmers to take advantage of a one-week extension in the Dairy Margin Coverage program signup deadline to Sept. 27, announced by USDA today. “Dairy farmers have much to [Read More …]