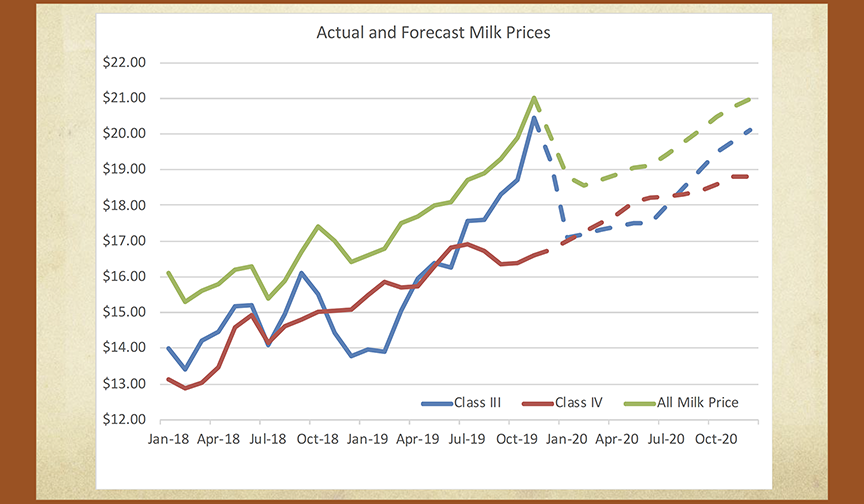 A Class III price of $20.00 per cwt is a likely possibility during the 2020 calendar year, according to Dr. Mark Stephenson, director of dairy policy analysis in the UW-Madison College of Ag. Positive factors he sees include slowing U.S. and world milk production, declining U.S. and world stocks of dairy products, a relatively strong domestic economy and possible improvements in trade agreements all could combine to make 2020 a year of real recovery, he predicts.

He cautions that there are negative factors which could impact dairy prices. If there is a U.S. recession with slowing GDP growth in China and weak economies in Europe, dairy sales could be hampered. There remains the possibility that trade negotiations are prolonged as well, creating more uncertainty among buyers.

Nevertheless, he sees the likelihood that Class III prices will hit $20 by fall and the USDA’s All-Milk price could be at $21.

Stable cow numbers, production per cow hampered by poor forage in many parts of the country and reduced heifer inventories will tend to support stronger prices. He also says he sees less appetite for expansion by larger dairies, cautious lenders and the need for many producers to put their balance sheets in order all tending to keep production growth limited.

Production during spring flush could be a key indicator. He says, “If the flush is light, expect buyers to bid up prices early and perhaps quite high.  If it is heavy, price strengthening will be slow for the year.” Production less than $615 million lbs. per day during April and May would be positive while higher production – $620 million lbs. per day or above – would put a damper on price increases.

He presented his  analysis on Jan. 15 during a webinar hosted by Farm Credit East. A recorded version of the audio and his slide set can be found at https://www.farmcrediteast.com/webinars

US dairy farmer eager to take milk products to China

Sitting in the Fair Oaks Farms Café, with a cup of coffee and a plate of sandwich on the table in front of him, Mike McCloskey harbors an ambition in heart: sell his dairy products [Read More …]