The USDA announced round 3 of the Farmers to Families Food Box program last Friday. The operation of round 3 is going to be significantly different than the first two rounds. In the first two rounds companies placed offers to supply boxes with a single type of commodity in them, or a combination box that could contain a mix of commodities. For round 3, there will only be combination boxes with a prescribed quantity of various commodities in each box. The box is supposed to weigh a total of 30-40 pounds. Dairy products (cheese, yogurt, butter, sour cream) will make up 5-6 pounds of the total with another 8.6 pounds coming from a gallon of fluid milk.

In the first two rounds the bidding process was just one step, a company submitted their offer and the USDA either accepted or rejected it. For round 3, it’s a two-stage process. First, companies need to submit their offer details on what would be

included in their boxes, where and how they would distribute the boxes and sample cost per box. If the USDA likes what they see, they will issue a Basic Ordering Agreement (BOA) for the company. Then the government will be issuing specific solicitations for the delivery of food boxes to specific states and those solicitations will only go to companies who have a BOA. Then companies who want to participate on that particular solicitation will submit their offer along with exact costs and products. The final contracts will be awarded based on cost as well as past performance and whether the company is also delivering boxes to “opportunity zones”. 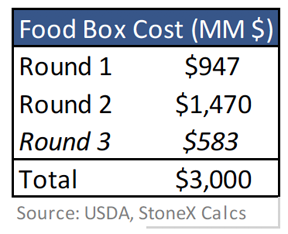 The more structured nature of round 3, and the fact that any issued BOA is good through August 15, 2022, suggests that this program might be around in coming years if it gets more funding. It’s hard to estimate how much dairy will move through round 3, but with only $500-$800 million in funds left, the quantity will be lower than what we saw in rounds 1 and 2 and the remaining money may be spread over more time than the previous two rounds. The remaining money for this program is only accessible while the US remains in a state of emergency. A few months ago it looked possible that President Trump might end that emergency order, but I would argue the odds of the emergency orders being cancelled at this point are low so the USDA may not be as eager to spend the remaining money as they were in rounds 1 and 2. 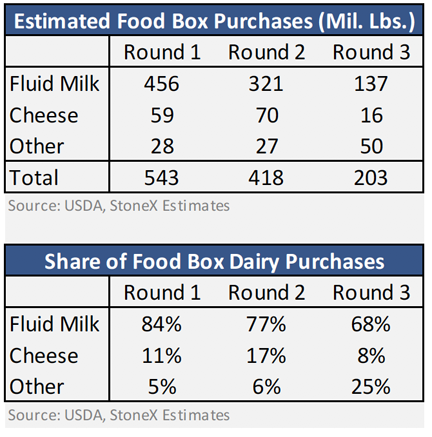 One interesting shift for round 3 is that the food box program is probably going to move away from fluid milk and cheese and toward products that cost less per pound (effectively higher water content). If you look at the fluid milk boxes that were awarded in rounds 1 and 2 compared to the dairy product boxes, roughly 50% of the money was spent on fluid milk (not shown in the tables to the right). If you look at it in terms of pounds, an estimated 77-84% of the volume purchased was fluid milk. However, in round 3 the box must contain just 1 gallon of fluid milk (8.6 pounds) and 5-6 pounds of other dairy products, so the split between them will be close to 70/30.

Now if you’re a company putting these boxes together and you have to put 5-6 pounds of dairy products in the box, and you have to be price competitive with your bid, you’re probably going to put as many inexpensive (per pound) dairy products in the box as possible. With retail packaged private label yogurt and cottage cheese around $1.20 per pound, it makes sense to include 4 pounds of those products and just one pound of Cheddar ($3.00-$4.00 per pound) to hit your 5-pound minimum for dairy products.

Does that matter for dairy prices? Probably a little. More of the milk solids will be absorbed in Class II, which will leave less milk for Class III and should still be generally supportive for dairy prices, but you won’t have companies panic buying and drastically tightening the fresh cheese market. So we will still be clearing a lot of milk solids, but it will probably be less disruptive to the cheese market than the first two rounds.

Editor’s Note:  Nate Donnay is a regular contributor to DairyBusiness News and Director of Dairy Market Insight for the Food Group at StoneX, formerly INTL FCStone, the brokerage firm with analysts in Chicago, Minneapolis, Dublin and Singapore. This item appears in the Udder Intelligence newsletter dated July 30 and is used here with permission.

Pandemics are scary. Our thoughts (helped tremendously by the media) quickly go to worst case scenarios. The new virus is always “something we’ve never seen before” and the threat of spreading it globally is always [Read More …]

Nate Donnay talks about rumors of milk hitting 2% under year ago levels Once again, Nate Donnay of INTL FCStone Financial talks with Joel Hastings of DairyBusiness News as he looks ahead and sees slowly [Read More …]