Slowly but surely, global markets are moving into better balance.

For the last three years, the dairy market conversation has been dominated by global milk supply growth and European intervention stocks of milk powder. These twin factors put us in a buyers’ market and kept a lid on global prices. But we start this year under different circumstances, as we explain in USDEC’s latest issue of Global Dairy Market Outlook, a publication that assesses the state of global dairy trade, loaded with data and analysis. 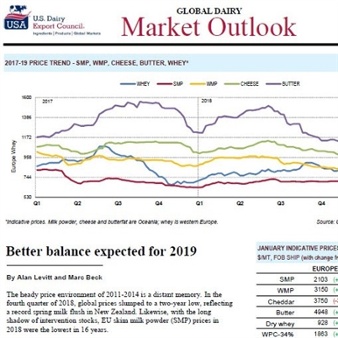 As the world’s largest exporter, EU milk production always has an outsized impact. Weather has depressed production in Germany and France (-2.1 percent in October-November) and phosphate regulations have done the same in the Netherlands (-5.7 percent in September-December). Gains in Ireland and Poland haven’t been enough to compensate. EU-28 deliveries were down about 0.5 percent in the last five months of 2018. We look for output down 1.0 percent to 1.5 percent in the first quarter of the year and expect to see little to no growth for the full year. 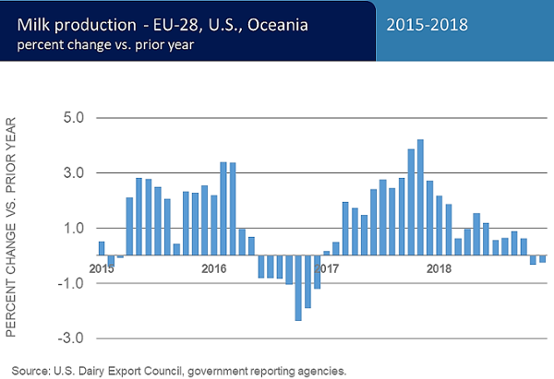 Meanwhile, the European Commission unloaded 247,857 tons of SMP out of intervention in the last four months, a third of that in a single mid-January tender. Holdings are down to just 3,651 tons and the cupboard should be empty after this week’s tender.

As a result of this shift, commodity prices improved in December and early January. The rally is certainly welcome, but there are still headwinds that could limit further price gains during the first half of the year.

When we get past the flush we could see further tightening, particularly if global demand remains good. Improved demand from China, Southeast Asia, North Africa and Mexico helped clear global supply in the latter part of 2018.

It’s easy to get caught up in single-month dairy data. Hungry for fresh information, we look to the latest month to understand the trend. But the reality is that one month makes for a very [Read More …]

The equivalent of one day of total U.S. milk production per month now goes to Southeast Asia. U.S. dairy exports to China have been hit hard by several rounds of retaliatory tariffs. Fortunately, the checkoff-funded U.S. Dairy [Read More …]