Current News
Many of the key dairy market statistics reported for March and April indicated that milk prices for U.S. dairy farmers  are on the road to improvement. Among them were a rise in the national average all-milk price in March, higher prices in April for the four dairy products that underpin the overall milk price structure in the United States, stronger domestic consumption, surging exports, and a reduction in previously excessive stocks of those key dairy products. There were some continuing negative indicators, as well, including an almost 2 percent rise in total milk solids production during the first quarter and a drop of $0.11 in the monthly margin – due to higher feed costs – under the Margin Protection Program (MPP) from February, to $6.77/cwt. in March.

Commercial Use of Dairy Products

Domestic commercial use of milk in all products showed a bit more robust growth compared to recent months during the first quarter of 2018, with particular strength in butter and other than American-type cheese. Total domestic sales of fluid milk products have decreased at a generally consistent rate of close to 2 percent per year since last summer. Expanded exports of skim milk powder continue to draw product away from the domestic market

U.S. dairy exports continue to surge. February exports were the equivalent of 17.2 percent of domestic milk solids production, the highest ever for the month of February. March exports were the second highest ever for the month of March, at 17.3 percent of domestic solids production. Double-digit increases were reported for all products reported here during the first quarter of 2018, particularly the large-volume ingredient categories of nonfat dry milk /skim milk powder, dry whey, whey protein concentrate, and lactose.

During the first quarter of 2018, the major import volume categories of cheese and proteins extended their continuing decline to almost one year. While butter imports bounced up a bit during the quarter, after retreating since last fall, the overall U.S. dairy trade surplus grew to its highest level since a few months during 2013-2014. The U.S. dairy trade balance – exports minus imports – has expanded from the equivalent of 10.3 percent of domestic milk solids production during the first quarter of 2017, to 13.0 percent a year later. Without this change, an additional 2.7 percent of U.S. milk solids production would have been sold in the domestic market, weakening prices. Instead, this improvement in the U.S. dairy trade balance has been an important contributor to the improving domestic milk price outlook.

Expansion of the nation’s dairy cow herd is slowing. Throughout 2017, the year-over-year growth rate of cow numbers swelled from 0.6 percent to 0.8 percent then receded back down to 0.5 percent. It dropped further to 0.4 percent during the first quarter of 2018. Over the same period, growth in milk production per cow dipped to as low as 0.4 percent year-over-year but returned back above 1 percent during the first quarter. Growth in milk production remained below 2 percent during most of the year, on a moving three-month average basis. Annual growth in milk solids production has been running 0.4 percent above the rate of annual milk production growth at the beginning of 2018. Individual states in which the rate of milk production has risen in recent months, compared with most of 2017, include California, Idaho, Washington and Colorado. The opposite trend occurred in New York, Michigan, Minnesota, Ohio and Vermont.

Production of both mozzarella cheese and total Italian-type cheese, of which mozzarella represents about three-quarters, increased by almost 4 percent from a year ago during the first quarter of 2018. Cheddar cheese is the flagship variety for the American-type cheese category and it also represents approximately three-quarters of that broader category. However, growth of this key variety and its larger category diverged significantly during the first quarter. The difference was due to a 9.5 percent reported growth for other American cheese types during the first quarter. These consist of “Colby & Jack & Monterey,” according to the USDA/NASS descriptor 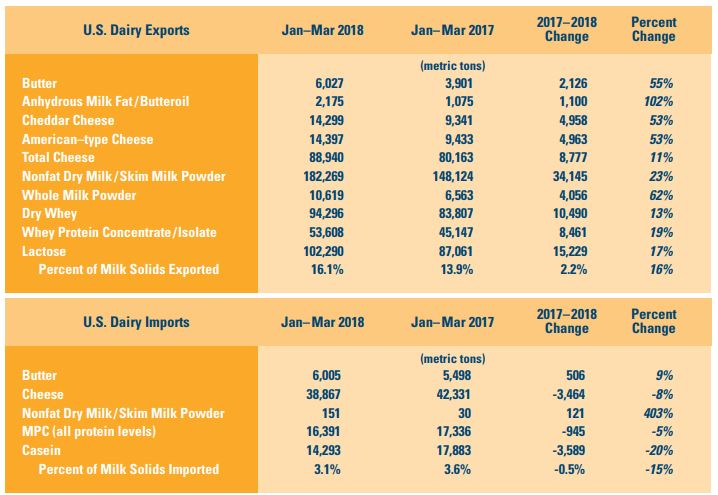 Evolution of supply chains for the key dairy products has led to a general increase in “normal” stock levels, based on observations during periods of both surplus and shortage of those products. For example, the norm for nonfat dry milk stocks has increased gradually to average about 39 days of total use for nonfat dry milk and skim milk powder. However, actual stocks were as high as three weeks above this level last fall, but have since fallen steadily to just above it as of March, as expanded U.S. exports have effectively drawn down surplus inventories. As a result, excess production and stocks outside the United States, together with Canada’s Class 7-fueled exports, are now solely responsible for the product’s continuing depressed price, as the United States is no longer a significant contributor to the problem. 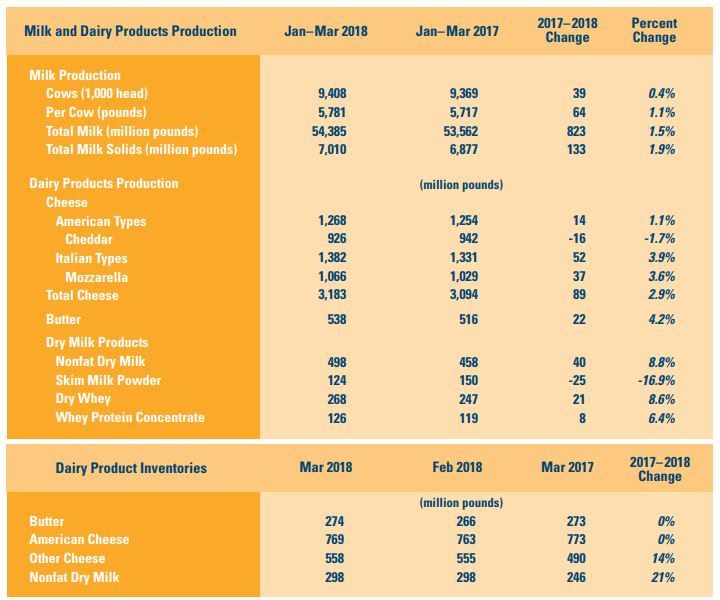 The prices of the four basic dairy commodities reported by USDA/AMS were all up in April over the month before, the first time this has occurred since December 2016. Federal order class prices experienced a similar increase in April, even those with partially or fully lagged components. These moves were part of the general strengthening of numerous milk price indicators, current as well as futures-based, that point to February–March as the likely low point of what had been a very lackluster outlook for milk prices this year. Among such indicators has been an increase of more than $0.35 a pound in the daily CME spot market price for barrel cheese from mid-January to mid-May. U.S. average retail prices for fluid whole milk in March were down by 12 percent from the beginning of 2017, while those for natural Cheddar cheese were up by 6 percent from their recent low in May 2017, according to statistics from the U.S. Bureau of Labor Statistics.

The all-milk price rose $0.30/cwt. from February to March, another indicator of an improving milk price outlook. But increases in all three feed cost components of the MPP feed cost formula boosted that index by $0.41/cwt. at the same time. The February and March MPP margins are such that milk enrolled in the program for all 12 months of 2018 at the lower, Tier One premium rate for the first 5 million pounds of covered milk production, will receive a positive return above the cost of premiums and fees for coverage at the $8.00 margin level, even in the unlikely event that no other payments occur for the remainder of the year. Producers have until June 1 to sign up to participate in the program during 2018. 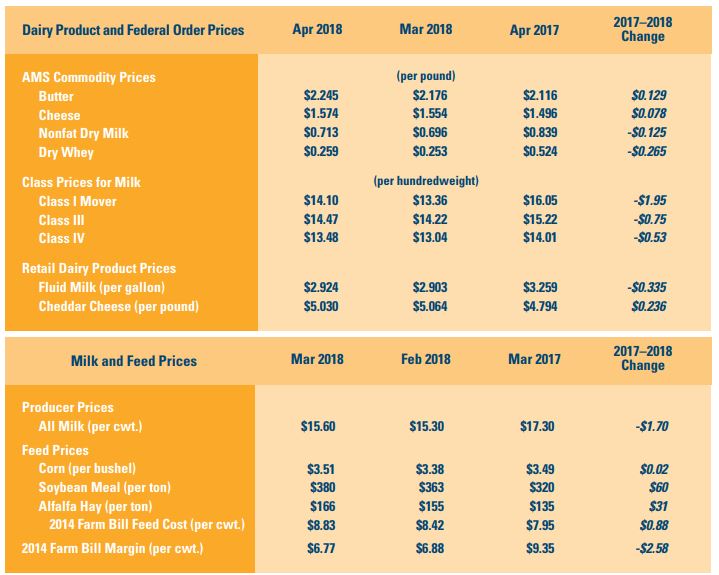 From June 2017 through April this year, USDA had steadily dropped its monthly forecasts for the national average milk price during all of 2018, by a total of $2.75/cwt. With its May forecast, however, the department abruptly reversed course with a forecast whose midpoint of the range was up by $0.60/cwt. from a month earlier. By mid-May, the CME dairy futures were indicating the U.S. average all-milk price would be about $17.05/cwt., another $0.60/cwt. above USDA’s May forecast midpoint. USDA’s May update also reduced its outlook for 2018 milk production by 300 million pounds, and it began forecasting 2019 U.S. milk production at 1.3 percent over 2018 production. This would indicate that the Department expects U.S. milk production growth to continue to slow over the next year couple of years.

Dairy Management Inc.™ and state, regional, and international organizations work together to drive demand for dairy products on behalf of America’s dairy farmers, through the programs of the American Dairy Association®, the National Dairy Council®, and the U.S. Dairy Export Council®.

The National Milk Producers Federation (NMPF) is a farm commodity organization representing most of the dairy marketing cooperatives serving the U.S.

On Thursday, December 20, 2018, the U.S. Department of Agriculture (USDA) released a pre-publication copy of the final rule establishing the national bioengineered (BE) food disclosure standard.  This rule is the first time that a [Read More …]

What can you do to minimize risk within the dairy market?