Those markets that gained ground last week gave some of it back this week, while last week’s losers are now on the rise. 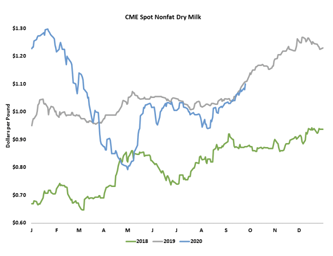 Like the proverbial tortoise, the milk powder market is moving slowly but steadily higher. CME spot nonfat dry milk (NDM) added another 3ȼ this week and reached $1.10 per pound, its highest value since early March, before the pandemic sickened the dairy markets. Domestic demand is building seasonally as fall bakers break out their aprons. Mexican buyers are stepping up orders, the primary force behind the most recent advance. Despite the stronger dollar and the steady increase in spot pricing, U.S. milk powder remains a bargain compared to foreign product, which is likely winning some business around the world.

The other dairy markets are wavering as they try to suss out demand in these uncertain times. In general, those that gained ground last week gave some of it back this week, while last week’s losers are now on the rise. After a couple days north of $1.60, CME spot butter plunged 9.5ȼ to $1.5025, retreating to the high end of the recent trading range. Retail demand for butter is perking up, but grocers are understandably hesitant to over-commit for the holidays. Foodservice demand is a little better every week, but as colder weather forces more diners indoors, it may reverse course. 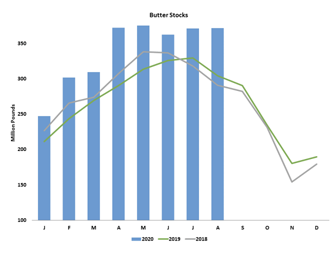 There were 371.7 million pounds of butter in cold storage on August 31, the highest August inventory since 1993. Butter stocks topped the prior year by 22%. That’s more than enough butter to satisfy the holiday demand season in a normal year. With holiday travel and big corporate gatherings largely on hold this year, it is simply too much. Butter stocks typically shrink in the summer months, but this year, for the first time in three decades, they actually grew from July to August, highlighting that demand is already falling short.

There were 1.38 billion pounds of cheese in cold storage warehouses at the end of last month, a new record high for August and 1% more than last year. Cheese demand looks relatively healthy. Cheese stocks declined modestly from July to August and have fallen more than 100 million pounds since the April 30 peak. 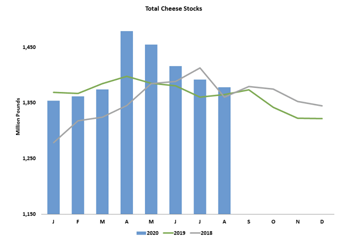 American cheese inventories bucked the trend and moved higher last month. It’s likely that cheesemakers pushed more Cheddar into aging programs in midAugust, when blocks averaged less than $1.70. That’s contributed to the shortage of Cheddar that is less than 30 days old and eligible for delivery to the CME spot markets today. But the tightness will be temporary. Sharply higher cheese prices in late August and throughout September likely curtailed the aging programs, which means fresh blocks will probably hit the market soon. And the industry is on the cusp of much larger block output, with the new Michigan Cheddar plant expected to open in a little over a month. The sky-high block price and much lower deferred futures reflect the expected transition from scarcity to plenty. 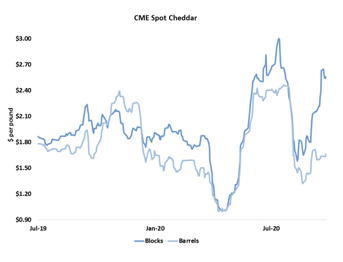 After a massive rally last week, CME spot Cheddar blocks took a step back, falling 7.25ȼ from Friday to Friday. At $2.555, they remain historically high. Barrels climbed 2.5ȼ to $1.66, narrowing the block-barrel spread to a still untenable 89.5ȼ.

CME spot whey added 2.25ȼ this week and reached 37.75ȼ. With that, the spot whey market has moved decisively out of its months’ long wallow in the low-30ȼ range. Amid strong cheese output, whey abounds. But Chinese demand has helped to absorb the increase.

The setback in spot Cheddar blocks weighed on October Class III futures, which fell 71ȼ to $18.88 per cwt. Other Class III contracts were little changed. Class IV futures gave back a little of the ground they gained last week. Fourth-quarter Class IV contracts average an uninspiring $14.21. 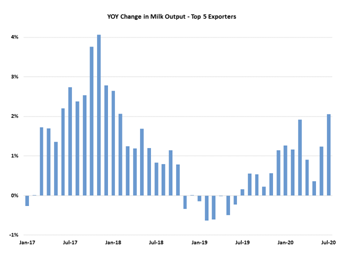 Milk output is on the rise around the globe and dairy producers in the Southern Hemisphere are entering the flush. In August, milk collections topped the prior year by 5.3% in New Zealand and 5% in Argentina. In Australia, July milk production rebounded 2.9% year over year. Milk output is now consistently higher than year-ago levels among all the major dairy exporters, which is certain to stiffen competition for dairy product exports, and perhaps weigh on values, in the months to come.

The feed markets slipped from last week’s highs. The fundamentals are still likely to support crop values, but there wasn’t enough new fodder to keep the bulls in such high spirits. December corn futures settled at $3.6525 per bushel, down 13.25ȼ from last Friday. At

$10.025, November soybeans finished 41ȼ lower than last week’s close. December soybean meal slipped to $338.60 per ton, down $3.50 from last week but still much higher than the values that have prevailed for two years.

Combines are rolling across the Corn Belt, and we’ll soon have a better picture of the impact of scant August rains on this season’s crops. Farmers in South America are just starting to seed their row crops, but there are already concerns about dry soils. International weather services have recently confirmed the presence of a La Niña, which is often – but not always – associated with poor crop yields in Argentina. A disappointing South American harvest would boost demand for U.S. crops. Meanwhile, China continues to snap up U.S. soybeans and corn at a brisk pace.

The ongoing trade frictions initiated by the United States have brought significant impact on America’s dairy products export, a U.S. expert in the dairy industry said. If the disputes did not end soon, the United [Read More …]