There is plenty of fodder for both the bulls and the bears, creating a rather schizophrenic trading market. We’re in a full-blown weather market, and the futures will be as fickle as the forecast. 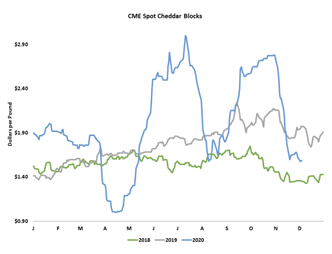 As befits the season, dairy markets gorged themselves on a smorgasbord of data over the past two weeks. The feast lifted spirits in the Class IV and whey markets, but, in characteristic fashion, the cheese market overindulged, and is now suffering a post-holiday hangover.

CME spot Cheddar blocks closed today at $1.585 per pound, just a half-cent above the August low and 6ȼ lower than where they stood two weeks prior. Barrels fell 2.25ȼ to $1.40, where they have hovered since midNovember. Cheesemakers pared back production in October to 1.13 billion pounds, down 0.6% from the prior year. But Cheddar output jumped 5.6% to the highest October volume on record. Some of that cheese likely made its way to Chicago last month, prompting the collapse in the spot market.

Manufacturers kept product moving, and cheese stocks remained slightly below year-ago levels as of October 31. However, amid high prices, exports have slowed. Daily average U.S. cheese exports to Mexico dropped to an eight-year low. Hopefully, today’s lower values will attract new orders at home and abroad. But as the foodbox program winds down and coronavirus cases rise, it may take quite a bargain to stimulate demand. 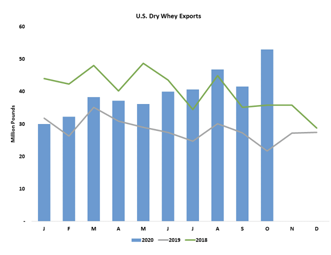 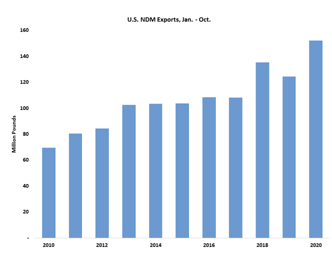 The milk powder market has followed a similar trajectory for many of the same reasons. CME spot nonfat dry milk (NDM) closed today at $1.15, up 6.5ȼ since the Friday before Thanksgiving. Spot NDM has rallied 55% from the July lows, thanks in large part to booming exports. The U.S. sent 169 million pounds of NDM overseas in October, the second-largest volume on record. Exports to Mexico fell short of the prior year, but buyers in Southeast Asia once again embraced U.S. milk powder with enthusiasm. U.S. NDM exports are on pace for a recordbreaking year, with shipments up 22.2% for the year to date.

Even after the sustained rally, U.S. NDM is priced to move. The U.S. dollar index has fallen to its lowest level since the spring of 2018, which boosts foreign purchasing power for products made in America. And global milk powder prices are perking up. At the Global Dairy Trade (GDT) auction on Tuesday, skim milk powder (SMP) climbed 3.6% to the equivalent of NDM at $1.40 per pound, well above the CME spot price. Whole milk powder values jumped 5%. Strong exports and competitive pricing have helped to keep U.S. NDM inventories in check even as driers run hard. Although combined production of NDM and SMP topped the prior year by 8.6% in October, manufacturers’ stocks inched upward only slightly.

After spending a couple weeks in the unwelcoming climes south of $1.40, the butter market came roaring back. It closed today at $1.48, up 13.5ȼ from where it stood two weeks ago. That’s still a historically low price to be sure, but the rally is a welcome change after many months of decline. 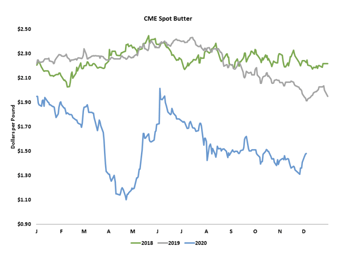 Churns were unusually active in October. They made 165 million pounds of butter, the highest October volume in more than a century of USDA records and 1.2% more than the prior year. Demand was equal to the challenge, and butter stocks declined seasonally in October. But at just over 300 million pounds, butter inventories on October 31 were 28% greater than the prior year and the largest stockpile for the month since 1993. Although the industry is pushing huge volumes of butter through retail, butter inventories are likely to remain burdensome due to the slump in foodservice. 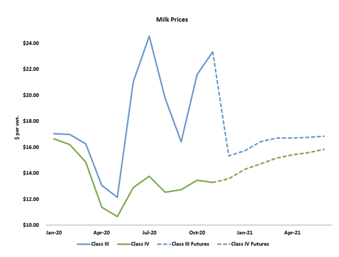 The cheese markets dragged nearby Class III prices down hard over the past two weeks. December Class III fell 63ȼ to $15.35 per cwt., while January Class III fell 92ȼ. Deferred Class III futures moved a little higher, and Class IV enjoyed a sizeable rebound. December Class IV gained 34ȼ and reached a still uninspiring $13.57. First-quarter Class IV contracts added an average of 78ȼ in the past two weeks. That’s excellent news for dairy producers whose milk checks are not derived exclusively from Class III. The narrower III-IV spread also lowers the odds of depooling and a punitive producer price differential in the year to come. Nonetheless, the futures suggest that milk revenues will be rather lean in 2021. The milk cow herd is large and dairy producers in the cheese states are flush with cash. It may be a while before the threat of lower prices translates to a slowdown in milk production.

The corn and soybean markets closed out November at multi-year highs, but then fell from their lofty perches. March corn settled today at $4.205 per bushel, down nearly 8ȼ from where it stood two weeks ago. At $11.63, January beans are 18ȼ lower than where they were on the Friday before Thanksgiving.

There is plenty of fodder for both the bulls and the bears, creating a rather schizophrenic trading market. It’s dry in the U.S. West and in northern Brazil, prompting concerns that crop supplies will tighten considerably in the coming season. The U.S. exported a record-breaking volume of soybeans in October, and corn exports are much stronger than in recent years. But rains have been better than feared in southern Brazil and Argentina, and soybean prices are starting to slip in China, prompting concerns that U.S. soybean exports will fade from their once frantic pace. Feed costs are certain to remain higher than in previous years, but the direction from here is difficult to predict. We’re in a full-blown weather market, and the futures will be as fickle as the forecast.

U.S. Dairy Exports Continue to Overperform in 2020 with Rising Demand from Asia

Public Health Emergency Declared The Trump administration declared a public health emergency in the U.S. Friday in response to the global coronavirus outbreak. In addition, the White House held a public briefing by the Coronavirus [Read More …]