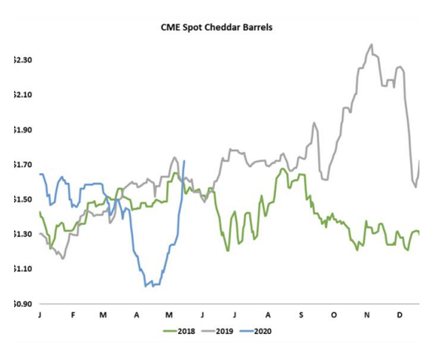 The bulls bellowed and bucked this week, and the bears fled. The dairy markets moved higher by leaps and bounds. Although the rally faded on Friday, the magnitude and velocity of this week’s recovery are astounding. Cheese led the charge. CME spot Cheddar blocks jumped 47.5ȼ this week to $1.78 per pound. Barrels soared 45ȼ to $1.72, a new high for 2020. Both blocks and barrels stand above yearago levels, a truly impressive feat given the state of the economy. Butter vaulted 35.5ȼ this week to $1.645. CME spot nonfat dry milk (NDM) rallied 11ȼ to 93.5ȼ. Whey slipped back 0.75ȼ to 39ȼ. 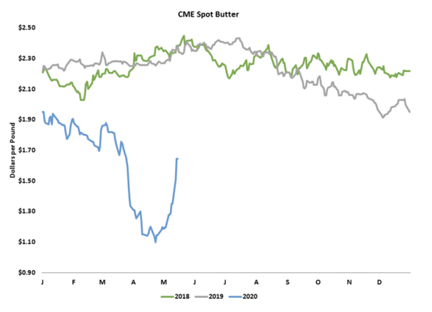 The futures gained considerable ground. June Class III settled at $16.85 per cwt., up $3.17 from last Friday. The June contract has climbed more than $5 in the past three weeks. June through December Class III futures sit comfortably above $16. 2020 Class IV futures added more than $1.50, on average, this week. But at less than $15 per cwt., they are still a long ways from covering dairy producers’ costs. 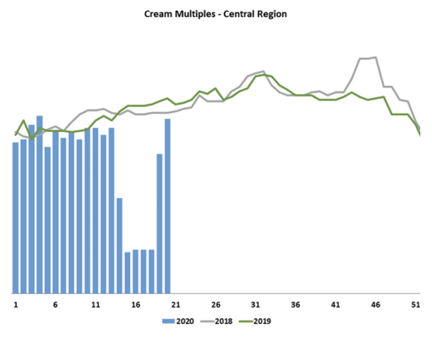 The dairy markets in general, and the cheese and butter markets in particular, have been buoyed by a perfect storm of purchases. U.S. cheese was a bargain a couple months ago. Now exporters are loading containers to fill orders that were booked earlier this year. Grocers are still moving dairy products in huge volumes. They are competing with restauranteurs who are restocking after spending most of March and April on the sidelines. Meanwhile, some companies that signed up to supply nonprofits with food boxes under USDA’s Farmers to Families program are scrambling to secure the yogurt, dips, cheese, butter, and fresh milk needed to fill them. In the near term, processors may need to ramp up output to meet these simultaneous requests. Meanwhile, ice cream season has arrived, tightening up the cream markets and reducing butter production.

While dairy processors are hurrying to squeeze large orders into a very short timeframe, dairy consumption may be less concentrated. Dairy products are moving rapidly from processors to cargo containers, food banks, commercial kitchens, grocery pallets, and in-home refrigerators. But consumers probably aren’t eating a lot more dairy than they were just a few weeks ago. USDA is donating dairy at such a scale that it’s likely to cannibalize retail sales. Restaurant goers will also need fewer groceries. Importers who stocked up on U.S. cheese when it was on sale won’t need to buy as much later. Orders are not expected to maintain their current heady pace. 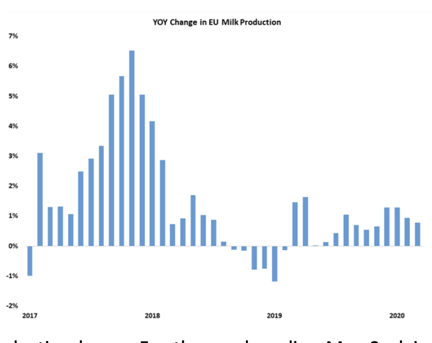 Whatever the future brings, improved demand has ushered the milk market into balance at a time of year when that can be difficult to achieve. Lower output has helped too. Preliminary data shows European milk collections up just 0.8% from a year ago in March. USDA’s Dairy Market News reports that high cull rates and variable feed quality have tightened milk supplies in the Northeast. Co-op penalties and self-imposed production cuts are reportedly weighing on milk yields in the Central region. In the Southwest and California, the heat is also dragging production lower. For the week ending May 2, dairy cow slaughter was 58,467 head, up 2.5% from the same week a year ago, and once again the highest total ever for this time of year, excluding 1986. Although the futures promise better days ahead, there is still immense pain on the farm. This week’s vigorous rally suggests the dairy downturn may be over sooner than we had feared. 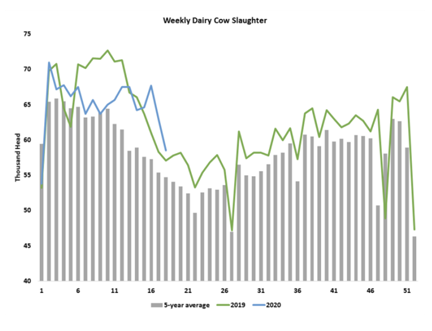 The corn market went nowhere at all this week. July corn futures finished right where they started, at $3.1925 per bushel. On Tuesday, USDA published its first official supply and demand estimates for the 2020- 21 crop year. With massive acreage and no sign of planting trouble, the agency projects end-of-season corn stocks at over 3.3 billion bushels, the highest total since the 1987-88 season. Soybean futures slipped 12ȼ this week to $8.385. Exports are perking up, but the low corn price suggests that farmers may switch some ground into soybeans, which is not helping prices. The currency is also an impediment. This week the Brazilian real fell to an all-time low against the dollar, making South American soybeans extremely attractive for foreign buyers.

Market Insight: The Global Economy’s Impact on the Dairy Market in 2019 and Beyond

With more outlooks for more global financial and commodity markets than any other conference, INTL FCStone’s Global Markets Outlook will provide insight and perspectives about the dairy market as it relates to the entire commodity [Read More …]