The dairy markets have had a slew of data to digest in the past two weeks, providing plenty of fodder for the bulls. The Global Dairy Trade (GDT) auction kicked things off last Tuesday with a mostly higher performance. Strong gains in butterfat products and cheese more than offset a 0.7% decline in the average winning price for whole milk powder (WMP), allowing the GDT index to inch up 0.5%. That marks the index’s tenth consecutive increase, its longest winning streak since the GDT made its debut in 2008. 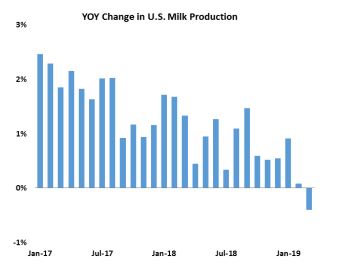 U.S. trade data for February echoed the GDT; butterfat and cheese exports impressed, while milk powder shipments stalled. Exports of nonfat dry milk (NDM) fell 17% short of February 2018 volumes. Cheese exports jumped 16% from the prior year and reached the second-highest daily average volume on record. Cheap cheese attracted new business in spite of stepped-up tariffs. Sales to Mexico climbed 9% from a year ago. Shipments to South Korea surged 71%. Thankfully, U.S. cheese prices have rallied considerably since the turn of the year. However, this suggests that cheese exports may slow in coming months as buyers no longer view U.S. cheese as a bargain.

Perhaps the biggest news this week came from USDA’s Milk Production report, which showed March milk output at 18.9 billion pounds, down 0.4% from a year ago. That’s the first year-over year decline in national milk output in six years. 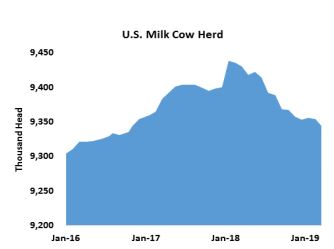 Modest improvements in milk production per cow were more than offset by a marked decline in cow numbers. In USDA’s previous report, the agency reported no change in cow numbers from January to February, despite record-breaking February dairy cow slaughter. The agency amended its error, reporting a still perplexingly low 2,000-head decline in February and a further 10,000-head reduction in March. At 9.344 million cows, the dairy herd is 86,000 head smaller than it was a year ago. Judging by slaughter volumes and auction lineups, contraction continues.

Less milk and more processing capacity is making for a tight milk market in the Midwest despite the spring flush. Spot milk is selling at par with Class III, compared to an average discount of $3 per cwt. at this time last year. That will make cheese producers think twice about topping up vats and stocking warehouses with Cheddar barrels. American-style cheese inventories are already becoming less burdensome. They did not move appreciably higher from February to March and end-of-March stocks stood just 2.3% above year-ago levels. Inventories of cheese of all varieties on March 31 were 4.3% higher than the prior year. 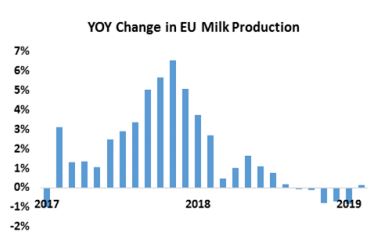 On the other side of the Atlantic, milk output is holding steady. European milk collections totaled 26.7 billion pounds in February, up just 0.1% from the prior year. That’s a shift to the plus column after five months of deficits, but it’s a rather paltry increase. Collections were 29 million pounds higher than in February 2018, roughly equivalent to a single day’s milk output in Michigan or Pennsylvania, or six hours of production in California.

In New Zealand, milk collections are slumping as the season wanes. In March, fluid milk output fell to 1.713 million metric tons, down 8.2% from the prior year. For the season to date, collections exceed the 2017-18 season by 3.2% on a fluid basis, while milk solids collections are 3.5% higher than last season. Parched pastures are likely to continue to weigh on milk yields; full season collections are expected to be up 3% from last year. That’s a sizeable increase, but it represents a disappointing finish for New Zealand’s dairy producers after a very strong start. 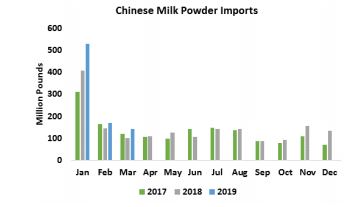 Meanwhile, New Zealand’s dairy product exports remain strong, which is likely depleting dairy product inventories. Robust demand from China is chipping away at the world’s once-burdensome milk powder stockpile. In March, China imported 60.6% more WMP than it did in March 2018, and China stepped up skim milk powder (SMP) imports by 15.3%. For the year to date, Chinese milk powder imports are up 29%. First-quarter milk powder imports were the second-highest on record, trailing only the sky-high volumes set in 2014.

As African swine fever sweeps through China’s hog herd, Chinese demand for whey for feed rations has plunged. Chinese whey product imports fell 27.1% from the prior year in March, pushing year-to-date volumes down 15.8%. Bludgeoned by the trade war, U.S. whey continues to lose market share. Chinese imports of U.S. whey products in March fell to their lowest daily average volume in more than eight years. The U.S. share of Chinese whey product imports dropped to 29.7%, its lowest point since September 2007. 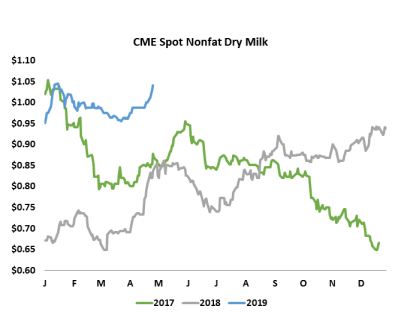 The loss of sales to China has clearly taken a toll on U.S. whey prices. CME spot whey slipped to 32.75ȼ per pound today, down 3ȼ in the past two weeks. But the bulls bellowed in the other dairy product markets. Spot butter climbed 1.25ȼ in the past two weeks and closed today at $2.27. Cheddar blocks added 4ȼ and reached $1.685. Barrels retreated last week but then came roaring back. They closed today at a new 2019 high of $1.63, up 1.25ȼ over the past two weeks. Spot NDM has not posted a single day in the red all month. It climbed today to $1.04, up a formidable 5.25ȼ in the past two weeks. The futures are looking much stronger as well. May through September Class III contracts are more than 40ȼ higher than they were in mid-April, and most Class IV contracts logged gains of a similar magnitude. Compared to the same period in 2018, April through December Class III futures are $1.71 higher, and Class IV contracts are up $2.29.

Bumper harvests in South America are weighing on crop prices. 2019 corn futures posted life-of contract lows this week, although they bounced back in the final trading sessions. July corn settled today at $3.6125 per bushel, down 8.25ȼ from mid-April. July soybeans closed at $8.67, down more than 40ȼ over the past two weeks.

Exports flat in October, with sales down in China but up 14 percent elsewhere, including large gains in SE Asia and Mexico.  U.S. dairy exports are on track for a record year despite flat sales [Read More …]