Dairy Month got off to a rousing start. The markets sprinted straight uphill on Monday. With amazing stamina and speed, they maintained their frantic pace for four days. But on Friday, they finally tired. Despite the late-week retreat, the total mileage is impressive, especially at this altitude. June Class III futures settled at $19.88 per cwt, up $1.38 from last Friday. July added 99ȼ and reached $18.67. August through October Class III futures posted double-digit gains, but the deferred contracts took a small step back. Class IV futures also climbed, with the strongest advances in nearby months. June Class IV closed at $13.91, up 52ȼ this week. 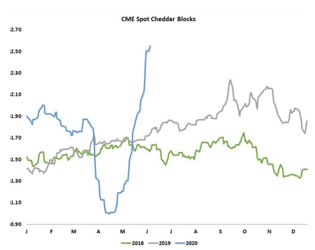 The remarkable run was fueled by the spot markets. Fresh Cheddar blocks remained difficult to find, and buyers kept upping their bids in hopes of securing enough product to meet their commitments to grocers, restaurants, or food banks. Spot blocks added another 15.25ȼ this week and reached an all-time high of $2.5525 per pound. Barrels gained even more, vaulting 26ȼ to $2.36 per pound, only a few cents away from the all-time high set last November. CME spot dry whey bounced back this week. It climbed 4.25ȼ to 34.5ȼ. 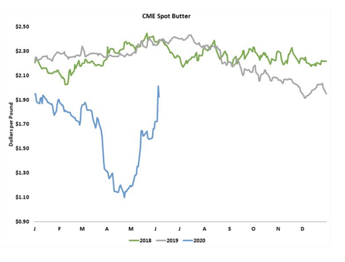 The spot butter market was the most volatile. It inched upward early in the week and then soared 29ȼ on Thursday to $2.015, its first foray above $2 in 2020. But that was clearly an overreach. Today spot butter fell back 9ȼ. Still, at $1.925, it closed 26ȼ higher than last Friday.

In contrast to the other dairy markets, milk powder lost a little ground every day. That added up to a 4.75ȼ loss for CME spot nonfat dry milk (NDM), which slumped to 97.75ȼ. Skim milk powder (SMP) took at small step back at Tuesday’s Global Dairy Trade (GDT) auction, slipping 0.5% to the rough equivalent of NDM at $1.22 per pound. 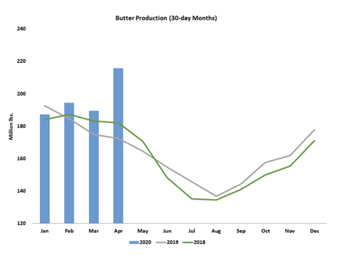 The relentless rally and the futures curve clearly argue that dairy products are tight. Anecdotal reports confirm that buyers are looking for product for immediate delivery, and they’re willing to pay up for it. At first glance, it’s difficult to fathom how we can be caught short in the current environment. Milk output overwhelmed processing capacity in March and early April, and demand surely suffered when restaurants around the nation shut their doors for two months. This week’s Dairy Products report highlights the impact of the disarray in April. 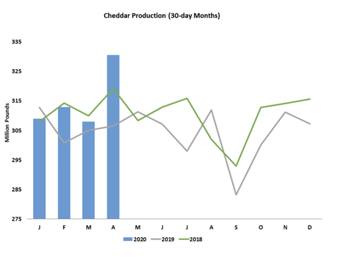 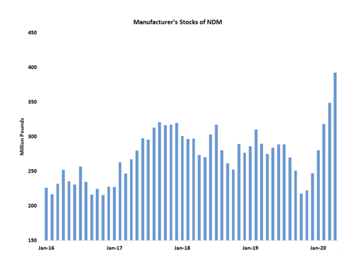 But much has changed since April. Milk production and components have slowed noticeably. Balancing plants are drying considerably less milk. Demand has improved. Cheese and butter makers are fielding simultaneous orders from regular grocery customers, returning restauranteurs, and new buyers armed with USDA funding and empty food boxes. Driers are selling large volumes of NDM to cheesemakers looking to fortify their vats. It is likely that these orders overstate consumption. Food box recipients and those who are returning to their favorite restaurants will inevitably need fewer groceries. But at the moment, grocers find it understandably difficult to forecast how quickly shoppers will return to their old ways, and they don’t want to risk empty shelves.

In time, the market will sort out the disconnect between manufacturers’ sales and actual consumption. But if demand is truly overstated, then today’s sky-high Class III values could be sending the wrong signals. The industry probably needs dairy producers to keep a lid on production, but it’s hard to resist the urge to top up the tank with June Class III near $20.

The corn market shook off the doldrums and climbed 5.5ȼ this week to $3.3125 per bushel. The funds are short a lot of corn, and they likely tried to trim their position as the market climbed, adding further fuel to the rally. The crop is safely in the ground and off to a good start. It was mostly hot and dry this week, but there are big rains in the forecast. Soybean futures moved sharply higher. The July contract jumped 27ȼ to $8.6775. Brazil has sent massive volumes of soybeans abroad in recent months. Its storehouses are likely running low, so China is shopping at U.S. ports. The Chinese government reportedly asked two major state-owned firms to pause on U.S. pork and soybean imports as diplomatic tensions heated up. But U.S. soybeans are a bargain in China, and private buyers are making purchases.