Trouble shooting herd problems can be very challenging and difficult. Reflecting on how problem herds were approached several decades ago compared to today is a complete 180. There is access to many resources and tools that help address bottlenecks to animal or crop performance. The other component is including financial data into the solution. Every recommendation to fix a problem can have a ripple effect, which ultimately can impact cost of production and profitability. Getting caught up in the details or minutia of a production problem is typically not the right path to take.

Since feed costs normally represent a high percentage of the milk income, nutrition is the focus when troubleshooting problems related to production, components, health and growth. Even with all the advances related to ration formulation, i.e. computer models, amino acids, fatty acids, metabolizable protein and energy, digestibility and rate of passage to name a few, none of these are usually the culprit in performance concerns. The basics related to feed management continue to be the areas that plague producers trying to optimize animal performance. Actual dry matter intake is a number that is still elusive on many operations.

Twenty-two well managed dairy operations participated in a two-year project tying together financials with feeding management. Producers recorded their batch weights fed and refusal on the day a TMR sample was taken. Milk production was calculated by number of cows going into the bulk tank and components were from the milk check for the respective month. Dry matter intake efficiency was evaluated based on the operation’s profitability using FINPACK® (Table 1). The results support observations from previous year’s work tying together income over feed cost with feeding management. One metric alone rarely defines a herd’s performance or financial health. In the high profit group, there is a substantial range on milk production, dry matter intake and efficiency. There is certainly opportunity for improvement on a few of the high profit farms, however their low efficiency was not necessarily a detriment to being profitable.

All herds on the project used a nutritionist and rations were formulated using current models. The paper rations showed that the various nutrient requirements were satisfied. The big discrepancy was with the formulated dry matter intake compared to what the cows were consuming. The factors influencing intake were related to the physical nature of the forages or ration. Since intake on many herds did not match the formulated diet, that negates the assumption that cows are receiving the “perfect” amino acid profile or the correct amounts of metabolizable protein and energy. Similar ration approaches were used in all three profit groups, which illustrates that ration formulation has minimal influence on animal performance and profitability.

The very well managed herds can benefit from the nutritional advancements consultants incorporate when formulating rations. However, the reality is too many dairies still need work on the basics related to feed management and cow comfort. Years of working with dairy producers has cemented the concept that the big picture approach is still valid. Focusing on the minutia of nutrients to the nth decimal place is not going to solve a major animal or financial performance problem. It is easy to get hung up on the details when working on a computer. It is more difficult to sort through the animal and human dynamics at the farm level to solve problems.

This data is based upon work supported by the National Institute of Food and Agriculture, U.S. Department of Agriculture, through the Northeast Sustainable Agriculture Research and Education program under subaward number ENE:15-136.

Step 1: Set a schedule for monitoring the dry matter percent of the TMR.

Step 2: Record refusals so the actual intake can be calculated per pen.

Step 4: If feed efficiency is consistently on the low end of the recommended range (<1.45), sample the TMR for analysis to check for accuracy. Examine ingredients being used for energy sources, i.e. corn silage, cereal grains, byproduct feeds.

Step 6: Work with a nutritionist on strategies to bring intake in line with production. 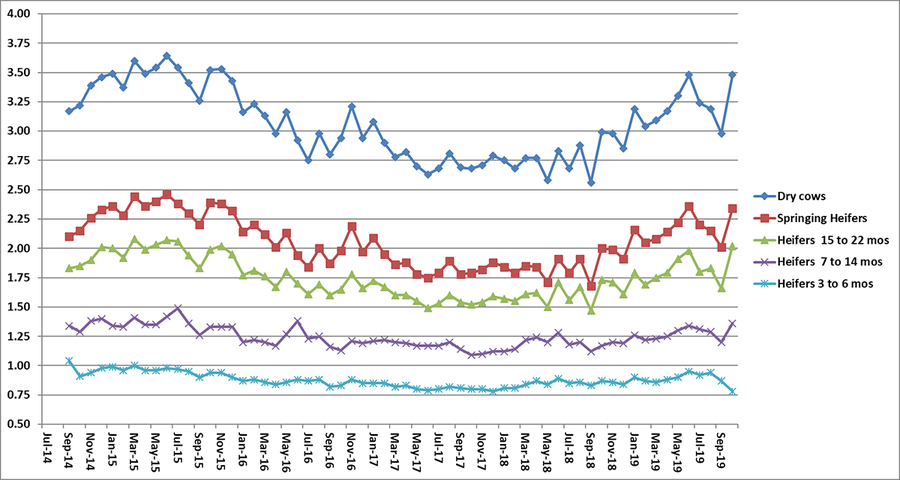 The financial health or profitability of a dairy operation is often the missing link of the farm’s financial picture. When the financials are broken, any attempt to make production improvements may not result in financial [Read More …]

Costs associated with the cropping enterprise are extremely important whether a producer has a livestock operation or growing cash crops. Accounting for all the expenses need to be included to accurately determine the bottlenecks to [Read More …]