Dairy’s coast-to-coast economic ripple effect generates jobs in other industries and tax revenue in every state. 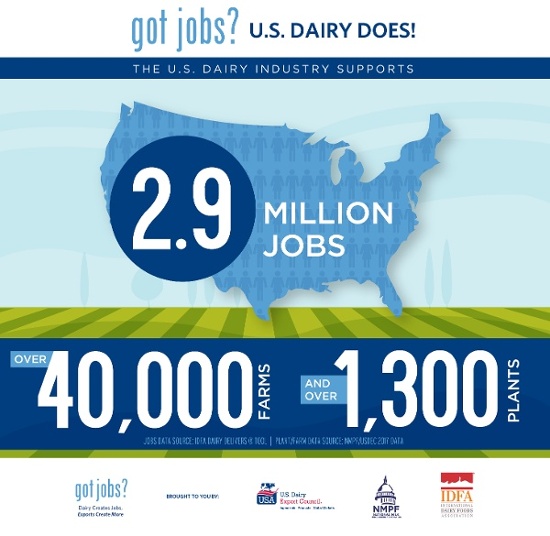 As 2018 draws to a close, it’s a good time to review some economic data, supplemented by images you can click on to get more information.

The facts and illustrations come from “Got Jobs?,” a collaborative effort of The U.S. Dairy Export Council, the National Milk Producers Federation and the International Dairy Foods Association, working with dairy partners and news media coast-to-coast.

How dairy fuels the U.S. economy 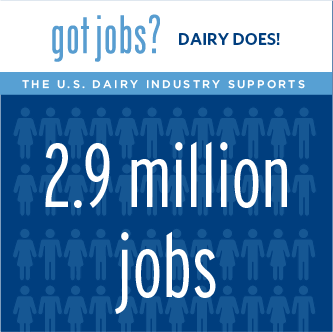 Dairy is a driver of the U.S. economy. Let’s break down the national economic impact into five categories, with data from Dairy Delivers®: 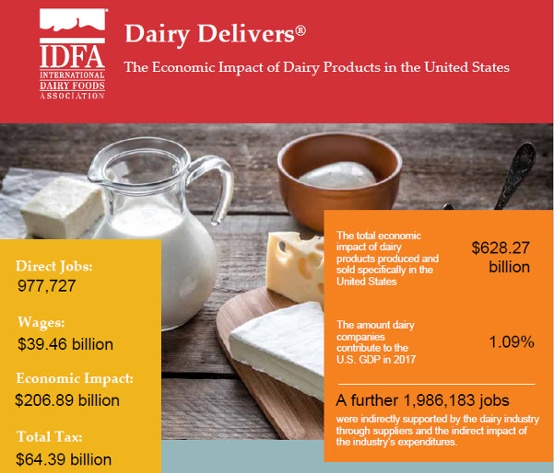 Dairy jobs, state-by-state: The top five are California, Wisconsin, Texas, New York, Florida. (See Top 10 chart below). What about your state? We assembled reliable data and put it into printable, three-page state bundles you can use for presentations, social media sharing and more. Find your state here. Then click to download the PDF. That’s it. 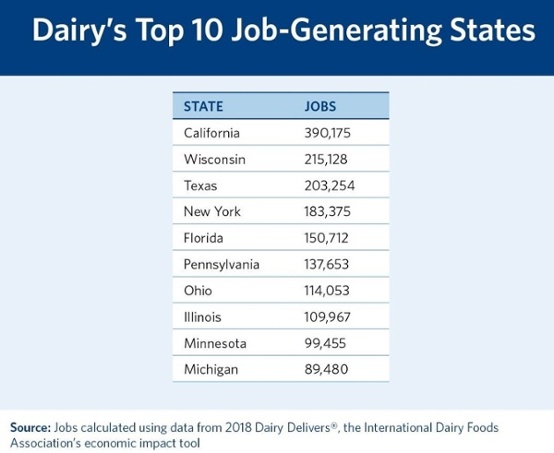 Dairy is golden in California: The Golden State is the ?1 jobs machine among dairy states, supporting 390,000 jobs. But that’s not all. Watch the video below to learn about other economic impacts in California and get similar videos on the top ten job-generating dairy states here. 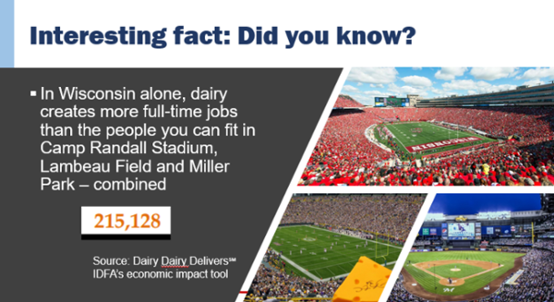 How dairy creates state tax revenue: In Iowa, dairy’s ripple effect generates $327.8 million in state tax revenue, according to The Dairy Delivers® tool.  USDEC President and CEO Tom Vilsack, a former Iowa governor, put that into perspective in an Iowa radio interview you can listen to below. (Click on orange arrow to hear more.)

Vilsack: “When state and local taxes here in the state of Iowa approach $1 billion, that is a significant amount of money that provides assistance and help in terms of keeping libraries open, in being able to ensure that there are adequate police and firefighters on staff and to be able to make sure that schools are properly supported. It goes right down the line.” 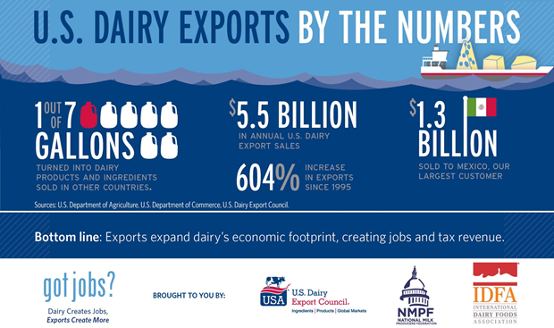 1 out of 7: It wasn’t long ago that we kept almost all our milk in this country. Today, the milk from more than one out of seven tankers leaving American dairy farms ends up in products and ingredients sold overseas.

Exports to Mexico stimulate U.S. economy: Mexico is U.S. dairy’s No. 1 export market. Every $1 of U.S. dairy exports to Mexico generates $2.50 of economic activity in the United States. Below are facts about the cheese we send to Mexico.

Exports on track for record year: Despite new tariffs on U.S. dairy products sold to Mexico and China, exports are on track for a record year. Statistics through October 2018 show that on a total milk solids basis, U.S. exports were equivalent to 16.3 percent of U.S. milk production. The calendar year record—15.4 percent—was set in 2013. 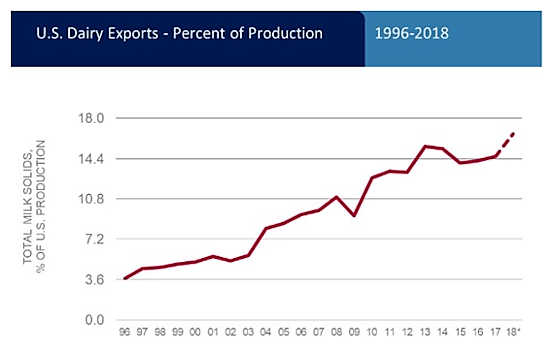 China tariffs: Lost sales in China are predicted to cost U.S. dairy farmers $12.2 billion by 2023 if retaliatory tariffs remain in place, according to an economic impact study. Read more.

With the U.S.-China #trade situation back in the spotlight, check out this analysis from #GotDairyJobs about the effect Chinese tariffs had on U.S. #dairy‘s momentum in the country. http://bit.ly/2BQ2gE1 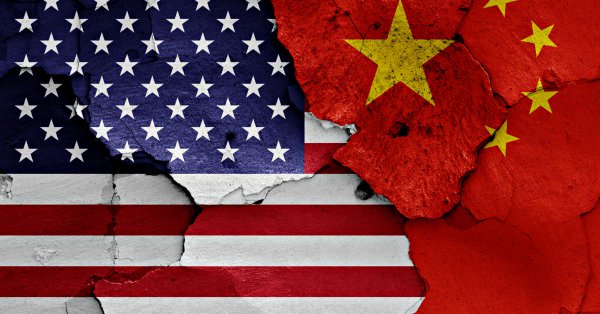 The longer tariffs persist the more difficult it will be to retain market share in the world’s largest country.

Sales in China down: In October, the latest month of complete data, U.S. shipments of milk powder, whey, lactose, cheese and butterfat to China were down 47 percent while U.S. exports elsewhere were up 14 percent. 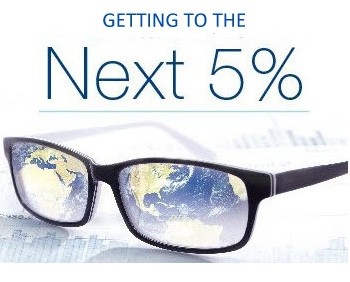 For more information on the impact of dairy on the U.S. economy go to: 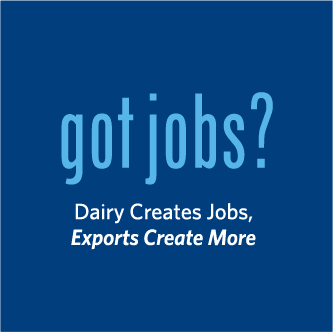 Track and amplify our messaging on social media with the hashtag #GotDairyJobs.

Mark O’Keefe is vice president of editorial services at the U.S. Dairy Export Council. He has led the GotDairyJobs.org collaborative campaign, working closely with IDFA, NMPF and the rest of the U.S. dairy industry. Reach Mark at mokeefe@usdec.org.

Milk’s effect on bone biology detailed in a new review from the Journal of Dairy Science® Bone is often thought of as being relatively static once we reach adulthood. In reality, it is complex and [Read More …]