Even with large drops in farm income, farmland values have held up well

Purdue University also recently released their estimates of Indiana farmland values.  Like USDA, Purdue also showed slight increases for 2018.  The annual percentage changes for average quality Indiana farmland are shown in Figure 1.  For 2018, they estimate that land values have increased 2.4%.  Since their peak of $7,976 in 2014 average quality farmland values have declined a total of 11%, with the declines coming in 2015 and 2016. 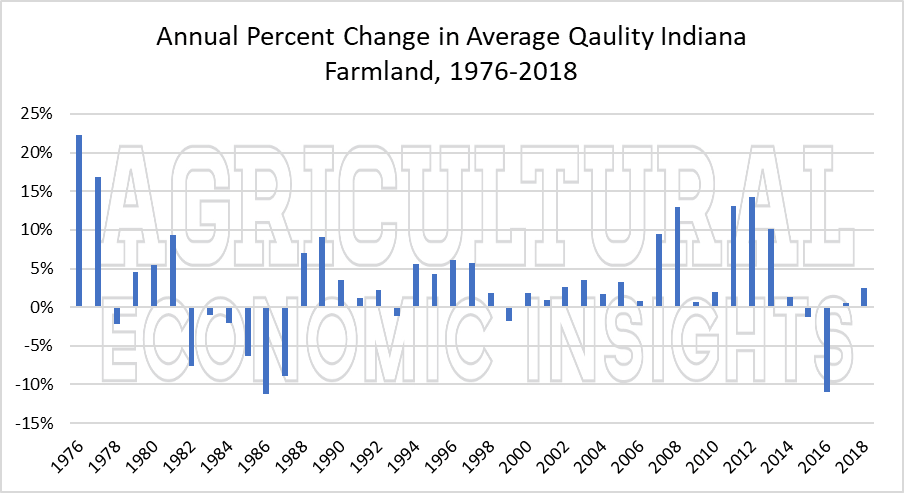 We have discussed cash rents on numerous occasions (see the farmland section) and wondered whether rents could continue to hold up in the face of declining farm incomes.  Here, we will examine the proportion of the gross revenue generated being paid in rent.

The ratio of cash rent to gross revenue on average quality Indiana farmland is shown in Figure 2.  For instance, a value of 40% would mean that 40% of the gross revenue was paid as cash rent, with the remaining 60% left to pay all of the other expenses of farm production.  This ratio can be quite volatile because gross revenues can vary widely from year to year.  Since 1976 the ratio has moved in a range from 18% to 46%.  This volatility makes it a little difficult to interpret the ratio, but some general comments are certainly possible. 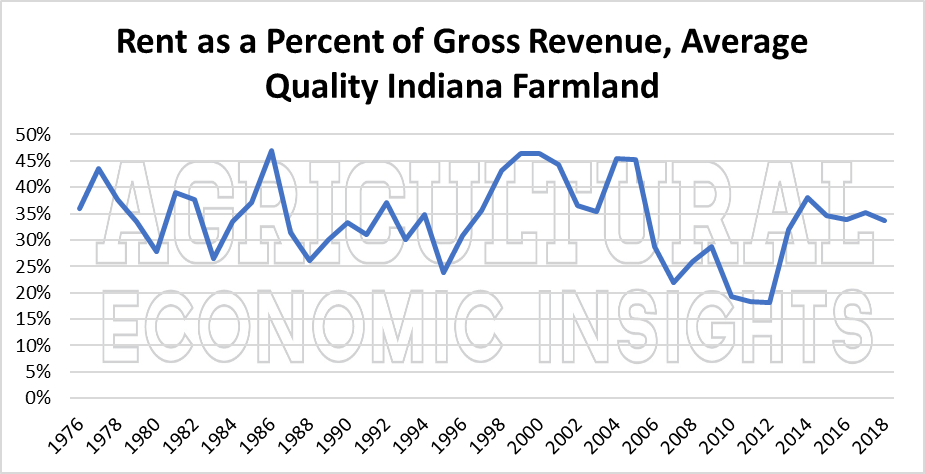 From 2014 to 2018, the rent to gross revenue ratio has been near 35%.  So is this ratio currently high, low, or somewhere in between? Looking back, there were several years in the late 1990’s and early 2000’s when the ratio was higher than today.  However, it is important to remember that the government farm programs were making substantial payments at that time and those payments were not included in our estimate of gross revenues.  If added, they would certainly drop the ratio from that time period substantially.

With 35% of revenue going to rent, the remaining 65% of revenue must pay the variable costs of production, fund capital equipment replacement, pay labor, and provide for family living expenses.  It seems unlikely that there is much room for this ratio to sustainably rise further.  Increases would certainly result in even greater economic losses for farm operators.  This would suggest that until gross revenues grow or other costs decline, there is little room for farmland rents (and returns to farmland) to grow. 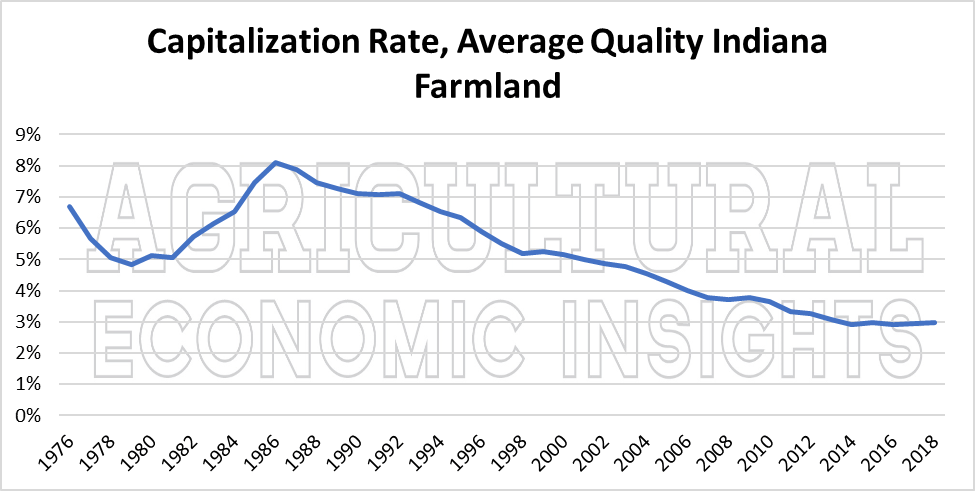 The most recent data on farmland values suggest a stable market.  This is despite a substantial drop in farm incomes.  The large increases in land values of a few years ago were primarily driven by two factors, increasing farm income and falling capitalization rates.  Today, income has fallen substantially.  Still, farmland values have remained relatively high as cash rents have been stubborn to adjust lower.  Additionally, the capitalization rate on farmland remains very low.

When looking at the data it appears that both of the key drivers that impact farmland values are stuck in neutral to reverse.  Until farm revenues begin to grow or other costs decline, it is difficult to see how cash rents will increase.  Likewise, with interest rates starting to rise, it seems unlikely that capitalization rates will fall much further.  Given these two factors, it will be difficult for farmland values to resume much of an upward climb and they will likely experience some downward pressure. In short, it seems difficult to make a strong case for higher farmland values at this point.

The U.S. Department of Agriculture (USDA) today published in the Federal Register a final decision to establish a Federal Milk Marketing Order (FMMO) for California. The proposed FMMO would incorporate the entire state of California. [Read More …]

The National Milk Producers Federation thanked the U.S. Department of Agriculture for allowing discarded milk to be counted toward milk marketings for the Dairy Revenue Production (DRP) or as actual marketings for the Livestock Gross [Read More …]