Two of the most prominent herbicide-tolerant varieties are dicamba-resistant cotton and soybeans. However, a recent Ninth Circuit Court of Appeals decision vacating the registrations of three dicamba herbicides, Bayer’s Xtendimax, BASF’s Engenia and Corteva’s FeXapan, means that effective immediately, cotton and soybean farmers can no longer arguably spray dicamba herbicides on these crops. This is especially problematic because, according to USDA’s most recent Crop Progress report,

as of May 31, 75% of soybean acres and 66% of cotton acres have been planted. Today’s article reviews recent trends in herbicide-tolerant acreage for cotton, soybeans and corn. 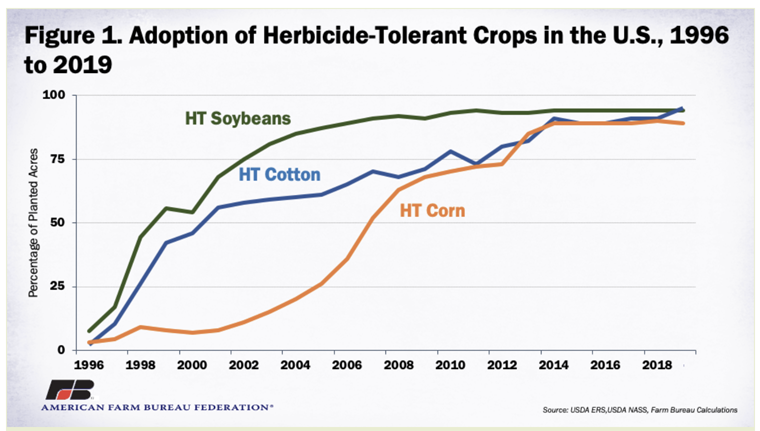 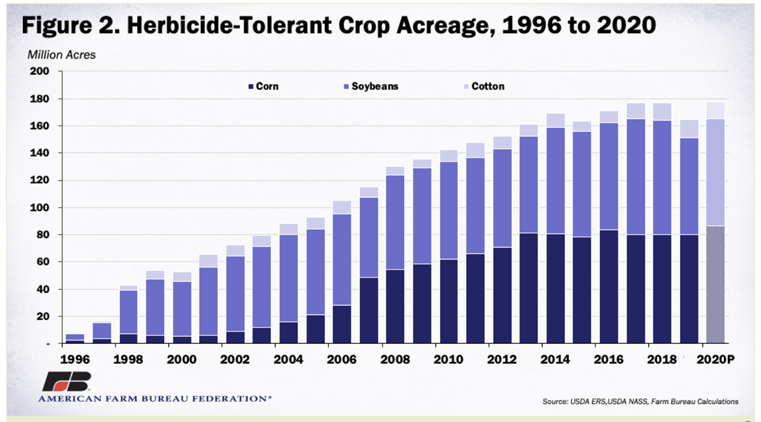 Over the last two decades, the percentage of corn, cotton and soybean acreage planted to herbicide-resistant crops has grown from less than 40% of planted area to more than 90%. These herbicide- and insect-resistant varieties help improve farm productivity and conserve natural resources such as water and soil nutrients by controlling weeds and invasive species.

Now, after farmers have already planted most of their cotton and soybean acres, the Ninth Circuit Court of Appeals has vacated the registrations of three dicamba herbicides — Bayer’s Xtendimax, BASF’s Engenia and Corteva’s FeXapan. As a result, effective immediately, cotton and soybean farmers can no longer arguably spray dicamba herbicides on these crops. Farmers with these dicamba-resistant crops are now faced with the difficult task of finding other herbicides that will protect their crops as effectively.

To help farmers affected by the ruling, organizations including the American Farm Bureau Federation are requesting the Environmental Protection Agency issue an existing stocks order, which would allow farmers to have access to dicamba for this growing season. Farmers must maintain access to dicamba products that have already been purchased, as well as those that remain in the supply chain to be applied later by custom applicators or farmers themselves in accordance with the current EPA label.

While it is unclear how EPA plans to react to the Ninth Circuit Court of Appeals’ decision, options include seeking a stay of the current decision or limiting the court’s decision to only apply to the states in the Ninth Circuit. While the EPA has jurisdiction over the pesticide registration review process, Agriculture Secretary Perdue has signaled his support for maintaining access to dicamba this growing season.

Take Action Against Foliar Diseases With These 5 Steps

The 2018 growing season is off to a great start in most areas of the Corn Belt, but variable weather and heavy rain in some areas can make scouting for foliar diseases more important. Protect [Read More …]

What are the major pathogens affecting crops like corn and soybean? How will the winter we just had affect insect pests in 2018? What is the difference between a sign and symptom? What are the [Read More …]