Current News
The Dairy Margin Coverage (DMC) program saw by far the biggest margin increase in its history in June, jumping $4.61 per cwt. from May to $9.99 per cwt. The gain was more than double the previous high of $1.84/cwt. set under the DMC’s predecessor, the Margin Protection Program, in 2014.

The record June increase was due almost entirely to a $4.50 per cwt. increase in the U.S. average all-milk price from May, itself a record one-month increase in the milk price, topping the previous record of $2.60 per cwt. set in April 2004. The June feed-cost formula was down by just eleven cents a hundredweight from May a month earlier.

The DMC Decision Tool hosted on the USDA/FSA website is currently predicting that the margin for July will be up by the second largest monthly increase, and then drift down to close to the $9.50 per cwt. maximum coverage level by the end of the year, as shown below.

The milk price outlook for the second half of 2020 has weakened in recent weeks as the Covid-19 pandemic continues to show a growing second wave of infections that’s expected to set back the recovery of dairy use in food service, along with a potentially prolonged recession and loss of consumer purchasing power. This may result in some DMC payments later the year for farmers who have insured themselves at higher levels of margin coverage. 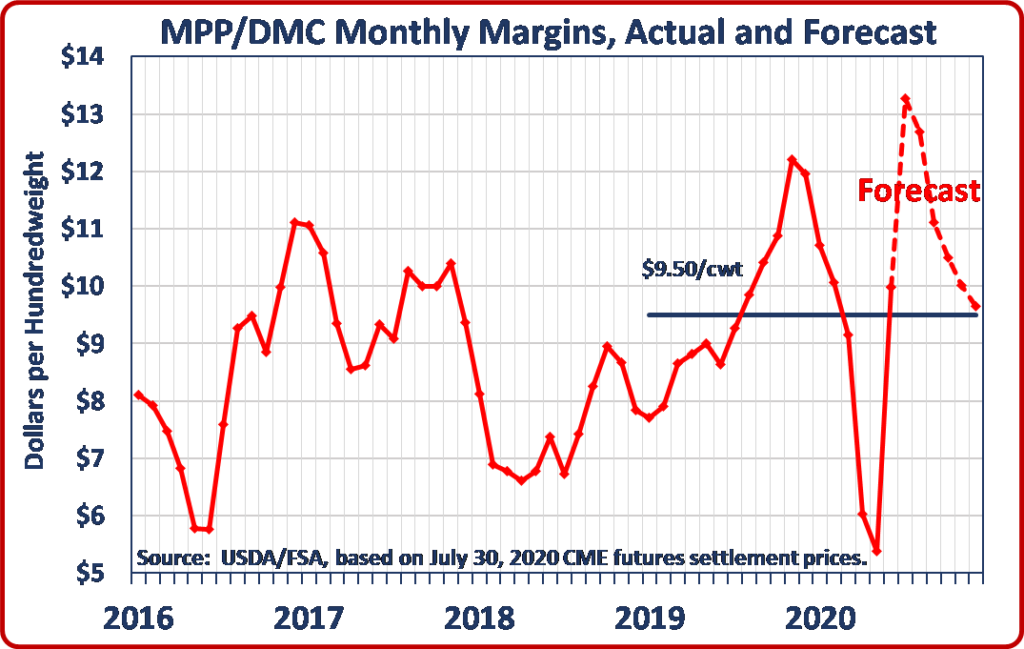 Results Matter, and the DMC Delivers

Getting results for members is central to the mission of any trade organization. Fortunately, thanks to a great deal of hard work by our expert staff, NMPF has important achievements to point to that will [Read More …]

Introduction As we start 2020, we now have two different years of enrollment data for the 2018 farm bill’s flagship dairy deficiency payment program, Dairy Margin Coverage. DMC is a voluntary program that makes payments when [Read More …]