In late 2017 we saw CME spot cheese prices fall from the $1.70 range in October to the $1.40s in December and $1.30s in January. CME spot nonfat dry milk (NFDM) dropped from 80 cents to a new record low of 64.75 cents/pound over that same timeframe. If you asked most people why dairy prices fell in late 2017 and early 2018 they would point toward growing milk production, particularly in the EU-28. Well, most people on the street would have no idea that prices had even dropped, but growing production pressuring prices is the answer you would get from most people following the dairy markets. And it’s true, but it isn’t the whole story.

Weak demand doesn’t get the credit it deserves. After running stronger than expected during the first half of the year, global dairy demand was weaker than expected the second half of the year with a sharp drop between August and November. Global milk equivalent imports August-November were down 2.8% from the previous year after growing 4% during the first seven months of the year. If you’re not familiar with “milk equivalent” units, it’s a way of rolling all the various dairy products (like cheese, butter, NFDM, dry whey, etc.) back up into the amount of milk it took to make those products. We track the trade flows of more than 20 commodities out of major exporters and into roughly 250 import destinations. Talking about all those products individually becomes a very tedious task and you often lose the important big picture. 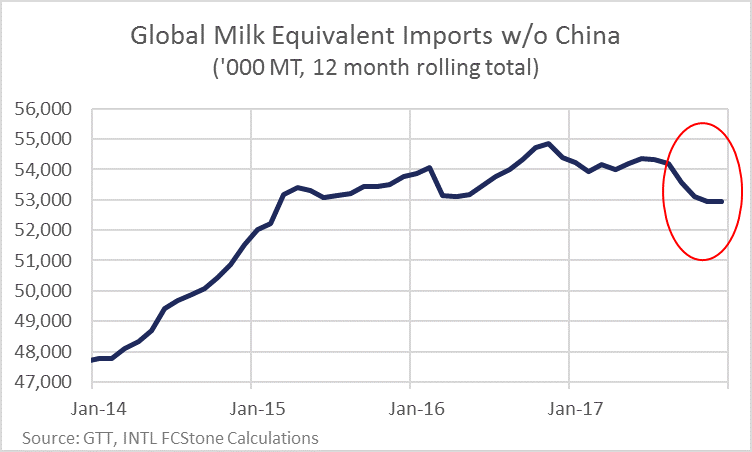 Why were imports so weak outside of China? There are a mix of reasons. Imports by Algeria and Mexico were down the most (in tonnage terms) over the Aug-Nov timeframe. It’s important to recognize that there is a one to six-month lag between prices and changes in imports. So the trade flow in the second half of the year was still being influenced by the rally in dairy prices that we saw in the second quarter of 2017. Algeria and Mexico, but especially Algeria, are opportunistic buyers. When prices are low they have a tendency to really load up on powders. As prices rise, they work down those stocks while they wait for lower prices again. The weak imports, then, were not due to any significant change in the underlying demand, they were just being savvy buyers.

There was some true and unexplained demand weakness in Southeast Asia, namely the Philippines, Vietnam and Indonesia. The Philippines are also fairly price sensitive and we’ve already seen some improvement in their imports in the December and preliminary January data, so we aren’t too worried about their demand moving forward. Indonesia and Vietnam’s imports were weak for most of 2017, and we haven’t been able to put our finger on the exact cause yet, so we’ve revised down our forecasted imports for those two countries for 2018 to account for the recent weakness.

We forecast imports for each of the top 31 importing countries that account for about 85% of global imports, then we roll the other 220 importers into a group we call rest-of-world (ROW). The forecast models are driven by population, real GDP growth, dairy prices, and other country specific variables like the price of oil for the major oil exporting countries. This allows us to put together a reasonable expectation for how much milk the world will demand given the underlying conditions. And those underlying conditions are currently supportive for dairy demand.

The IMF is forecasting real GDP growth in developing countries to be up 4.79% in 2018, which would be the fastest growth since 2013. If we hold everything else constant, every 1% change in real GDP growth adds 0.8% to global milk equivalent import demand. So the good global economic growth is a big driver behind our expectation of good demand in 2018. Even after factoring in continued weak imports for Indonesia and Vietnam, and assuming a little bit of a slowdown for Chinese imports we’re still expecting global imports to be up about 6% in 2018. That means importers will take an additional 4 million metric tons of milk (8.7 billion pounds). That would be the fastest growth, on a percentage basis, since 2014.

The demand outlook is pretty good, but it’s also lining up against growing milk production in most of the exporting countries. Milk production in Europe was up 4.0% from the previous year in December. US production was up 1.8% in January. Australia was up 3.9% from last year in January and Argentina was up 12.8%. The only major country with falling production right now is New Zealand, which was down 7.4% in January due to poor weather. When you add it all up, milk production across the major exporters was up a little over 2% from year ago levels in December and January. That is a slowdown from the 3 to 4% growth that we saw July-November of 2017. The steep drop in dairy commodity prices in late 2017 and early 2018 are working their way into farmers milk checks now, which means we will see further slowing in milk production growth as we move through 2018. We’re still expecting production across the major exporters to be running close to 2% in the second quarter, but it slows toward 1% in the third quarter and 0.5% in the fourth quarter. That will put production for the year up about 1.5%, or 4.5 million metric tons which compares favorably with our expected increase in global imports of 4.0 million. If we toss in some mild domestic consumption growth, we end up with inventory levels being pulled down slightly in 2018.

So the dairy markets are not all doom and gloom. We went through a period of weak demand in August to November that also coincided with some of the strongest milk production growth across the major exporting countries that we’ve seen in a while. That combination pushed dairy prices significantly lower. The lower dairy prices, along with poor weather in New Zealand, are tightening the supply outlook. A good chunk of the weak demand in late 2017 was just buyers being strategic and waiting for lower prices. The global demand outlook for 2018 is actually pretty good. So if you combine the slowing milk production growth and the good underlying demand outlook it does support the view of higher dairy prices during the second half of the year. We’re not expecting a big rally, but we could see prices firming the second half of the year.

When considering the importance of water in lactating cow diets, we need to remember that milk is 87 percent water, and its consumption is directly correlated with milk production and feed intake. Water also makes [Read More …]

August Class III milk prices, milk protein prices, and cheese prices were all up as predicted in the August 5, 2019 post to this blog.  History and the futures market suggest that these prices will [Read More …]

The VR headsets will hopefully relax the cows, offering them sun-filled summer views of green pastures. If you walked onto the RusMoloko dairy farm near Moscow, in Russia, you may think you’ve arrived onto a [Read More …]