Trade policy experts at USDEC and NMPF synthesized the most significant provisions of USMCA for the U.S. dairy industry. 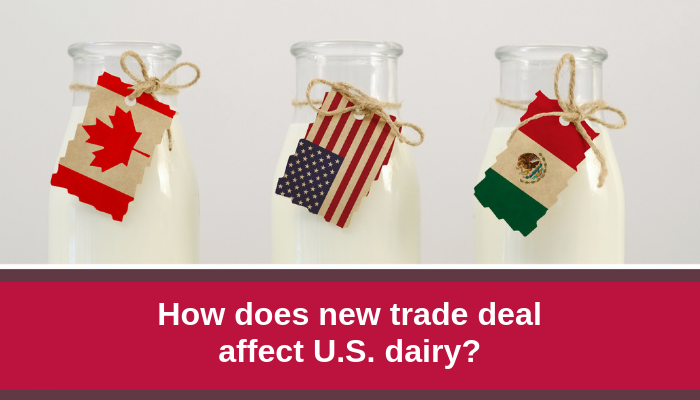 But as is the case with most free-trade agreements, the devil will be in the details and implementation.

After months of negotiation, USMCA was agreed to in principle by the three countries on September 30. Since then, USDEC and NMPF scrutinized the official text for implications for U.S. dairy. The document signed Friday was also reviewed.

What follows is a bulleted executive summary identifying the most significant provisions of USMCA for the U.S. dairy industry.

Assuming final approval by Congress, the ultimate impact of the USMCA agreement will depend on how it’s implemented by the three countries.

The U.S. dairy industry will engage with both parties in Congress to seek their support for the agreement’s passage while at the same time seeking assurances that Canada will comply with their commitments in a fair and transparent manner.

Whatever happens, USDEC and NMPF will represent the trade interests of the U.S. dairy industry with energetic vigilance.

For U.S. government fact sheets and other information on the agreement, including its complete text, visit the website of The Office of the U.S. Trade Representative (USTR).

“Disruption” is a present-day buzzword, and dairy has had its share. From the globalization of markets to the rise of plant- and cell-based competitors, farmers are grappling with a shifting landscape, even as dairy farms [Read More …]