Export and import data is now available for the third quarter of 2019.  This post will cover cheese and butter, the most important commodities in the Class III price calculation.  By comparison, the first half export/import analysis can be seen here.

Cheese net exports (exports less imports) are shown cumulatively in Chart I for 2018 and 2019.  The two parallel each other very closely.  Through the third quarter of 2019, net export volumes of cheese were up by just one percent compared to the prior year.

Cheese exports (not net exports) are shown in Chart II.  For the first three quarters of 2019, exports were up three percent over the prior year.

Imports of cheese, Chart IV, have increased strongly in 2019, impacting the weak net export data.  Imports of cheese are up six percent YTD through the third quarter of 2019.  Most all of the increase has occurred in the third quarter of 2019.  If this trend continues, it will have a significant impact on cheese inventories.  There are typically significant increases in cheese imports in the fourth quarter holiday season.

Chart V shows where the imported cheese is coming from.  The largest increase in cheese imports has come from the largest cheese import supplier, Italy.  Imports of cheese from Italy are up 30 percent over the prior year.

Butter net exports have declined significantly in 2019 compared to 2018 (Chart VI).  Net exports had fallen to negative numbers in late 2018 and that decline in net esports is now increasing.  That means that the U.S. is a net importer of butter.  The negative net exports increased from four million pounds of butter to 26 million pounds of butter in 2019 YTD.  The change is the result of both lower exports and a surge in imports.


Exports have been small for some time due to the strong U.S. consumer demand for butter.  In 2019, those exports have dropped by another 45 percent (Chart VII).

But, the real story impacting the huge drop in butter net exports is the continuing increase in butter imports (Chart IX).  Butter imports YTD are up by 25 percent over the prior year.

Imports of “Irish” butter are up 27 percent from the prior year and YTD make up 44 percent of all butter imports.  The consumer demand for this cultured butter is strong and growing very fast.  It is impossible to brand a competitive U.S. product, because the product is typically branded as “Irish” butter with names like “Kerrygold”.  While consumer consumption of butter is growing nicely, nearly half of the growth is in imported “Irish” butter.  That reduces the demand for production of domestic butter. 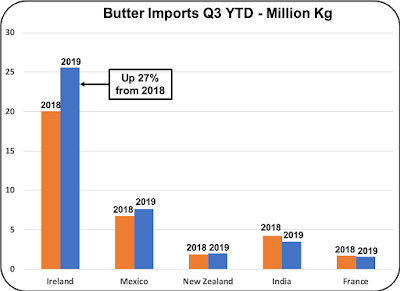 The hope of all dairy producers is that exports will expand to keep pace with milk production expansion.  That would solve the problem of milk over-production which causes increased inventories primarily of cheese.   Large inventories of cheese decrease cheese prices and in turn decrease the Class III milk price.

However, the increase in cheese exports remains anemic and an expanded cheese export market is not happening!  Cheese net export increases of just one percent will not soak up excess milk that results from over-production and falling dairy consumer demand.

Increased production of butter for export would also increase the production of nonfat dry milk (NDM).  NDM is primarily an export item and the international market for NDM is crowded.  As a result, there are limited increases in butter churning.

Perhaps with approval of the new trade agreements like USMCA, there will be increased growth of U.S. dairy exports.  As of this date, those approvals seem to be held up by political squabbles.

Editor’s Note:  John Geuss is a dairy consultant based in Florida. This information appears in his Milk Price blog column sponsored by Addiseo and is published here with permission.  He may be contacted at [email protected]

Cheese and Butter Exports and Imports for 2019

Dairy export and import data for 2019 was recently released by the United States International Trade Commission (USITC).  It was a tough year for exports in general as new trade agreements were being negotiated.  In [Read More …]

August Class III milk prices, milk protein prices, and cheese prices were all up as predicted in the August 5, 2019 post to this blog.  History and the futures market suggest that these prices will [Read More …]

The world needs U.S. dairy and we need the world to export more of our abundant milk, award-winning products and high-quality ingredients.  When we unveiled our “Next 5%” goal last year to increase U.S. Dairy [Read More …]

With over 100 people attending coming from more than 15 states coast to coast and three foreign countries, the National [Read More ...]