What Is the Issue?
Many U.S. growers of labor-intensive crops have long relied on immigrant workers from
Mexico, including many who are not legally authorized to work in the United States. New data
and analysis suggest that the numbers of unauthorized Mexican immigrants in the United States
declined significantly after 2007. Research also suggests there has been a long-term decline in
the number of people from rural Mexico who want to work in either U.S. or Mexican agriculture.
Meanwhile, demand for farm labor in both U.S. and Mexican agriculture is rising. This
report explores the likely causes of this relative reduction in farm labor supply and discusses the
implications for U.S. agriculture.

What Did the Study Find?
Several indications suggest that the farm labor market is tightening in the United States:

• Reports of labor shortages from farmers, growers, and ranchers;
• Rising farm wages, as indicated by USDA’s Farm Labor Survey, including an increase in
non-supervisory wages from 55 percent of the non-farm average in 2014 to 57 percent in
2017 (see chart, next page);
• Greater employment of non-immigrant, foreign-born farm workers through the H-2A
Temporary Agricultural Program, as indicated in the program’s certification and visa
statistics; and
• A decline in the number of unauthorized immigrants from Mexico living in the United
States, as estimated by researchers studying Mexican immigration to the United States.
This last indication—a decline in unauthorized immigration from Mexico—stems from a
variety of causes, suggesting that rural Mexico is not likely to generate a steady supply of farm workers
for U.S. agriculture over the long term:
• Expansion of agricultural employment in Mexico since 2008, serving an industry whose
fruit, vegetables, and tree nuts are partly exported to the United States;
• Growth in non-agricultural employment opportunities in the Mexican economy, particularly
in the service sector;

Farm wages are rising, both in real (inflation-adjusted) terms and in relation to nonfarm wages 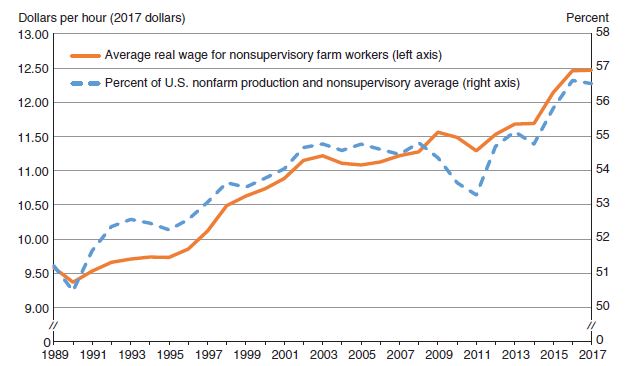 Note: Non-farm wage refers to the average hourly earnings of production and non-supervisory employees in the private, non-farm sector.

• Rising educational levels in rural Mexico, which enable workers to take advantage of the new
employment opportunities outside of agriculture; and
• Declining fertility rates in Mexico.

For several reasons, U.S. agricultural employers may find it difficult to offset the decreased supply of farm labor
from Mexico with more farm workers from other countries:

• The United States will have to compete with Mexico and other countries in the Americas that are also
expanding agricultural production and recruiting farm workers;
• Recruiting from countries more distant than Mexico may be costlier; and
• Many of the factors that pull Mexicans out of farm work—such as rising education levels and a growing
service economy—are also at play in other developing countries.

In responding to these long-term challenges, U.S. agricultural employers are likely to continue selecting crops
and improving technologies to reduce labor requirements and employing management strategies that increase
productivity and encourage employee retention.

How Was the Study Conducted?
This study draws conclusions about changing conditions in the U.S. and Mexican markets for hired farm
labor using wage data collected by USDA’s Farm Labor Survey and the Bureau of Labor Statistics’ Current
Population Survey, certification and visa statistics from the H-2A program, Mexican labor market statistics as
reported by the World Bank’s World Development Indicators, and empirical estimates based on the Mexico
National Rural Household Survey (Encuesta Nacional a Hogares Rurales de México–ENHRUM), among other
sources of economic and policy data.

For June, our example herd was UP Protein retreated $0.12/lb, and fat advanced $0.09/lb. The price of Other Solids decreased 7%. On a hundred-weight basis, Statistical Uniform Price (3.5% fat) increased $0.48/cwt and Class III [Read More …]

This Week in Dairy News: April 13

Dairy producer and consultant Geoff Vanden Heuvel talks with Joel Hastings of DairyBusiness News. Both attended the the USDA’s meeting about the California FMMO on April 10, 2018 in Clovis, California.

Designed to protect against a drop in crop revenue or yields due to price declines or crop losses, crop insurance policies are one of the most important risk management tools available to farmers. While [Read More …]