For January, our example herd was UP 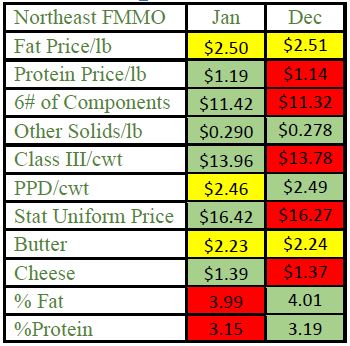 Thinking outside of the bulk tank – Management gurus talk about “Thinking outside the Box”. This month we want to focus on thinking “outside of the bulk tank”. Two recent situations got our attention. In one, 2 herds in the Syracuse market both ship 6.35 pounds of components. Many experts suggest aiming for this target. However, these herds had a $0.42/cow/day income difference. One had high milk with lower components; the other had lower milk with higher components. In this case, pounds of components sold did not give a complete picture. Another pair of herds in the same market had good production and the same income per cow (82 pounds of milk, 4% fat, and 3.2% protein). One herd was comfortable; the other herd was in crisis. Why? Very different overhead cost structures turned out to be the answer.

A major overhead expense is debt, historically expressed as debt per cow. Consider our 82-pound herds. With debt of $5,000/cow and 5% interest over a 10-year amortization, payments will be 2.60/cwt on $20/cwt debt. Reducing that debt to $3,000/cow or to $12/cwt, reduces payments to $1.55 or $1.05/cwt less. More recently, debt has been expressed per cwt milk produced per year. As shown above, this may give a better financial picture than debt/cow.

Another industry shift has greatly impacted overhead costs. With improved management (sexed semen, lower DOA rates, etc) and planning for possible expansion, many herds have dramatically increased heifer inventory. However, this comes at a cost. To maintain a 35% cull rate, with 2 years age at first calving, a herd needs 0.7 heifers per cow. Many herds are now carrying 1 heifer per cow. Assuming heifers cost $2.30/day (~$1,700/heifer), our 82-pound herd spends $2.80/cwt for heifers. If inventories are adjusted to 0.7 heifers/cow, cost drops to $1.96/cwt or $0.84/cwt less.

Going back to our two herds with identical incomes per cwt, higher P&I payments and heifer carrying costs led to an increase in breakeven price of $1.90/cwt for the herd in crisis. It is important to remember that high production performance does not guarantee good financial performance if other costs are not in line.

For March, our example herd was UP As predicted, protein soared up $0.45/lb. Fat remained steady while other solids decreased 16%. On a hundred-weight basis, Statistical Uniform Price (3.5% fat) increased $0.52/cwt and Class III [Read More …]

March will have a nice upturn; component values are up, but PPD will be down. Fat was flat with protein roaring back $0.45/lb and other solids decreasing 14%. For our example herd, component prices increased [Read More …]