For March, our example herd was UP

As predicted, protein soared up $0.45/lb. Fat remained steady while other solids decreased 16%. On a hundred-weight basis, Statistical Uniform Price (3.5% fat) increased $0.52/cwt and Class III price increased $1.15/cwt which resulted in PPD decreasing $0.63/cwt. We had previously predicted PPD to decrease $0.54/cwt. However, there was surprisingly less milk used for Class I than originally expected, resulting in a lower Statistical Uniform Price. Regionally, fat and protein continued their seasonal downward trend. 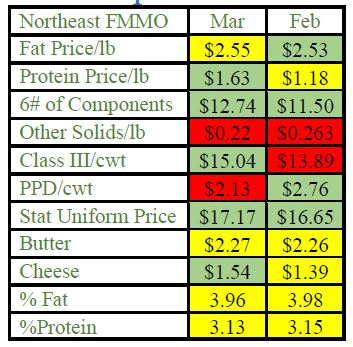 The Art and Science of dairy farm management – This newsletter has been especially hard to write as we considered subtle differences in farm management, calling the discussion “Art versus Science”. These are not distinct concepts and managers often switch between art and science depending on the situation. Traditionally, dairy farming was an art. If you knew how to tend to cattle and crops, the farm would prosper. This type of manager has an “eye” for the livestock and a “feel” for cropping decisions. The art of managing can be described as a set of intuitions that keep the dairy from going off the rails. However, these farms are generally limited in size as managers hone their intuition by doing most of the work. Additionally, there is always the danger that intuitions can become misleading (performance is worse, but we forgot that forage quality is too!).

Larger farms with multiple hired employees, tend to migrate to management by science – or “by the numbers”. Now the farm needs to implement protocols, “on-board” employees, and monitor performance using averages, indexes and ratios. This management style is concerned with items like pregnancy rate, cash-flow coverage ratio and pounds of components sold per cow per day. As managers collect and analyze more and more data, it is easy to be overwhelmed and confused. It’s easy to forget that data must be meaningful; some numbers are slow to change while others are quite variable. And sometimes our data is just wrong, for instance a calibration slipped or data are entered incorrectly. Managing by the numbers requires knowing which numbers are important, how much “play” is in those values, and realizing they describe a biological system. If the numbers indicate a problem, someone with a good “feel” for the cows and a critical “eye” for problem areas needs to observe the situation to get the whole picture. We may find a problem which isn’t described by our metrics or that there is no problem and that we have been misled by an outlier (or erroneous) value.

For June, our example herd was UP Protein retreated $0.12/lb, and fat advanced $0.09/lb. The price of Other Solids decreased 7%. On a hundred-weight basis, Statistical Uniform Price (3.5% fat) increased $0.48/cwt and Class III [Read More …]

In preparation for a meeting this summer, we decided to dig deeper into what has been driving milk price in the NorthEast for the last three years.  Two things were surprising to industry pundits.  First, [Read More …]