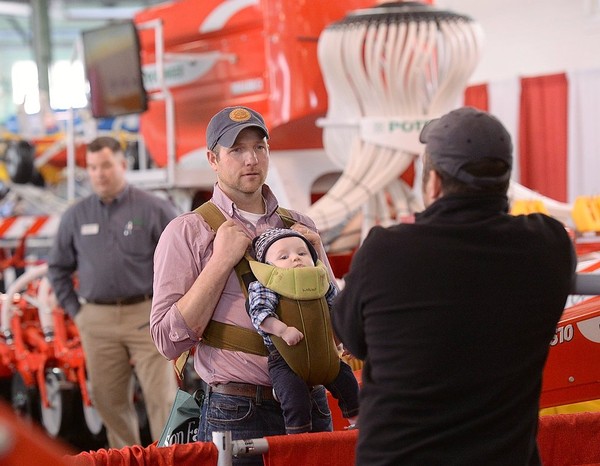 John Collins of Rome holding his son in a 2017 photo at the New York Farm show. ICE has come under scrutiny for its actions during a raid of Collins’ farm last month. February 23, 2017. Michael Greenlar | mgreenlar@syracuse.com(Mike Greenlar)

Half of New York’s farm labor force is in the U.S. without documentation, New York’s Agriculture Commissioner Richard Ball estimated.

Ball said immigration raids on farms throughout the state are creating a labor crisis that could close hundreds of farms and keep food from making its way to grocery stores and kitchen tables.

“It’s a large number, which should point us toward the fact that we need to stop kicking the ball down the field and deal with it,” Ball said in an interview with Syracuse.com/NYUP.com Tuesday.

During that raid, farmer John Collins said ICE agents didn’t show him a warrant when he asked for one, didn’t leave when he asked them to, and then handcuffed him and threw his phone after he attempted to video them.

Ball, who has a farm in Schoharie County, spoke with Collins after hearing of the raid.

“I’m sad to say I was not surprised. Unfortunately, the story is all too common,” Ball said.

Collins’ worker, Marcel DeLeon-Aguilar, was in the country illegally but had documents that allowed Collins to fill out the proper forms. He is in an immigration detention center and is now facing criminal charges in federal court.

or decades, a shadow workforce has operated quietly on farms in New York and across the nation. Immigrants need work. Farmers have jobs they cannot fill. The workers offer the farmers enough paperwork to fill out the proper forms.

“And away you go,” Ball said. Farmers, he said, are not in a position to audit workers’ forms. And they are in desperate need of workers.

In the past, it was a situation where everyone, including immigration authorities, looked the other way for the most part. As long as people worked without trouble and the right boxes were checked, they were mostly left alone.

But as the Trump administration ramps up the arrest, detention and deportation of undocumented workers, farmers are losing their workforce, Ball said. ICE is increasingly targeting non-criminal immigrants who are in the U.S. without documents, a population often left alone under the Obama administration. ICE activity in New Yorkwent up 27 percent last year.

There are 209,000 immigrants who came into the country illegally living in New York outside of New York City, according to data from the Migration Policy Institute. Nationwide, that number is 11 million. As increasing numbers are being picked up by ICE, detained and deported, the ripples are being felt in the communities where the immigrants lived and worked, often for years.

Ball said he gets phone calls a few times a week from farmers telling of how ICE has taken their workers. Sometimes, it’s as if the workers simply disappear.

A few days ago, Ball said, he got a call from another farmer near Rome. The farmer told Ball that family members had dropped a long-time worker off at Walmart to do some shopping. When they returned, he was nowhere to be found.

“He never came out,” Ball said.

Ball said the farmer told him that ICE agents were in the store and questioned the worker, who spoke Spanish, about his papers. Then, Ball said, the ICE agents took him away.

So why is it so hard for farmers to get workers legally? The U.S. has a guest worker program for agriculture workers (the visas are called H2A.). The process is cumbersome, and expensive, Ball said.

But farmers have responded to the immigration crackdown by using it more.

That program is not available for New York’s largest industry: dairy. The visas are only for seasonal work, like harvesting apples and other crops. Dairy farms need workers year-round.

Ball said there is an effort to change the guest worker program to make it easier to use and allow dairy farmers in. But that’s something Congress would have to do, and has been trying to do for more than a decade.

The cows and the crops can’t wait, so farmers turn to the workers who show up on their doorsteps, eager to work.

What happens now that ICE is showing up on their doorsteps, too?

A report by Farm Credit East that used U.S. Census data estimated that 1,080 farms in New York were so dependent on an undocumented workforce that the farms could be forced out of business if the current immigration crack-down continues.

Last week, the state pushed back at ICE. The governor issued a “cease and desist” letter, telling ICE that its agents cannot violate the constitutional rights of people in New York.

In the letter, Cuomo cites the example of how agents behaved on Collins’ farm as behavior that the state will not tolerate. He also issued an executive order, barring ICE from operating in state buildings without warrants signed by judges. (Usually ICE officers don’t have such warrants).

Alphonso David, Cuomo’s chief counsel, said Monday that the state is still waiting for an official response from ICE. Last week, ICE Acting Director Thomas Homan blasted Cuomo back, saying he was disappointed by the governor’s “grandstanding.” Monday, though, Homan announced he would retire rather than seek the director position.

David said that if ICE continues to act as it has, the state could sue in federal court.

“Our position is that we are a state of immigrants,” David said. “We have a constitution that everyone has to respect.”