In a free DeLaval webinar series on calf raising, Dr. Bob James spoke on June 8 about feeding and managing pre-weaned calves. He emphasized the importance of meeting nutrient requirements for growth and health as well as transitioning calves to dry feeds at a “reasonable” age.

Biology of a newborn calf

Even though calves are born monogastric, the dairy industry previously put a lot of emphasis on weaning calves as quickly as possible to reduce costs, use less labor and avoid diarrhea. “Have you ever gotten something really wrong and it took you a long time to realize it? I did,” Dr. James admitted. “My initial [focus] in feeding calves was in early weaning and rumen development – and that’s not really biologically normal.” Research has shown us that there are desirable outcomes to feeding calves better during early life which translates into better health and performance in later life.

Newborn calves are born with variable amounts of body fat, lose body heat quickly and are prone to digestive upsets. Their immune function depends on colostrum, which is also a source of protein, energy and other compounds. Feeding calves soon after birth enhances colostrum absorption and provides energy and other nutrients during a critical time of development. Providing a dry environment allows nutrients to be utilized more efficiently for growth. 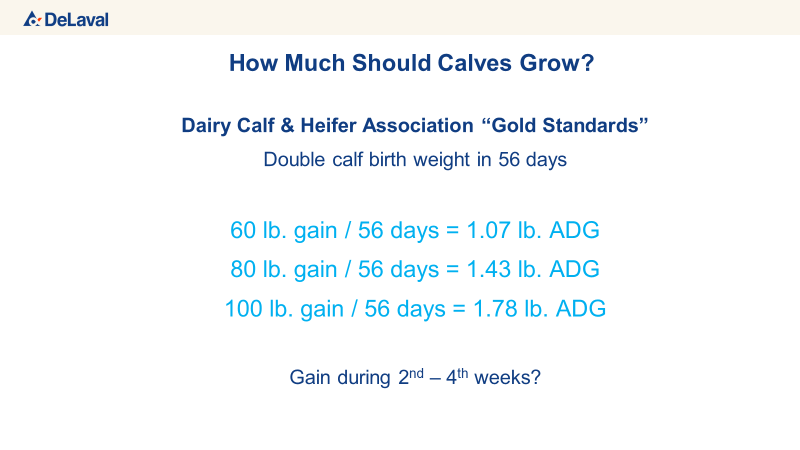 The Dairy Calf & Heifer Association “Gold Standard” for calf growth is to double their birth weight in 56 days. In the first week, Dr. James noted that calves are still “figuring it out,” and may not show much interest in eating. However, it should be a goal to achieve these levels of gain by the time calves are two to three weeks of age.

In a German study, two-week old calves were allowed to drink up to 2.5 liters of milk every two hours with an automated calf feeder (if they wanted to!).   These calves gained more than two pounds a day compared to their counterparts where intake was restricted to 6L/day. The calves with ad lib diets were also an average of 77 pounds heavier at 16 months of age – proving more milk earlier versus “earlier” starter intake has its advantages. The higher milk-feeding rate did suppress calf starter intake, but only by a few weeks.

Nutrition of a pre-weaned calf

Pre-weaned calves can be fed whole milk, waste milk or milk replacer. Whole milk has higher levels of energy (fat) and protein, but it can be costly. With excellent herd health programs, waste or unsaleable milk should be in very limited supply.

A University of Minnesota Veterinary School study fed one group of calves whole milk and the other milk replacer. The calves fed whole milk gained more weight but they consumed more protein and energy as compared to calves fed a 20% fat: 20% protein milk replacer. In addition to better growth the whole milk calves, were treated less and had higher survival rates largely due to better nutrition.

Some dairies utilize unsaleable or waste milk for their calf feeding program. Field studies have shown that this milk is frequently lower in fat and protein and often benefits from the addition of a supplemental “balancer” to provide these missing nutrients and provide supplemental vitamins and other desirable additives. If using waste milk or saleable milk it should be pasteurized to reduce or eliminate undesirable bacteria or other disease organisms.

Milk replacers vary in price, ingredient content, quality, fat and protein. “Generally, you’re going to get what you pay for,” said Dr. James. Good quality milk replacer from a reputable manufacturer can be just as effective as whole milk in achieving desired weight gain. The pounds – not percentage – of protein and fat the calf consumes is important. To see desired gains in younger animals, intakes should be at least two pounds of milk or milk replacer solids a day (large breeds), including 24 to 28 percent protein for optimum lean tissue gain. Fat levels can vary depending upon energy requirements dictated by the environment or season. This translates to at least 8 quarts of milk or milk replacer per day. 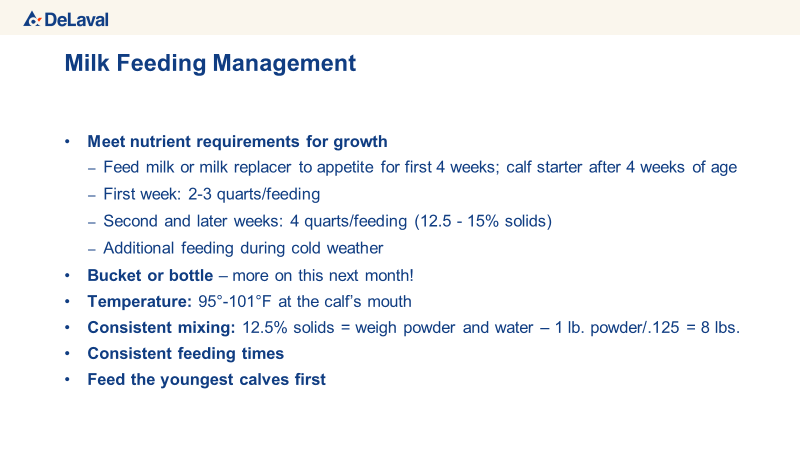 Younger calves (less than four weeks of age) will not eat enough starter feed to make a significant impact on their nutrition requirements. Milk or milk replacer is key to getting them growing.

In the first week, Dr. James recommended feeding calves two to three quarts per feeding. When calves are two weeks of age, increase intake according to appetite to encourage early growth. This may be as much as four quarts per feeding (at 12.5 percent solids if using milk replacer and fed twice daily). Higher rates of milk feeding may be achieved, particularly with computer or other free choice feeding systems where calves consume more frequent meals of smaller volume.

The temperature of the milk or milk replacer and consistency in how the milk replacer is mixed is key to healthy growth. Dr. James also recommended being consistent with feeding times – and to add a feeding during cold weather.

“This is a compromise of growth, economics and labor,” Dr. James said of weaning calves.

Dr. James suggested not offering starter the first week of a calf’s life since they don’t each much – and it could help save labor. When calf starter is introduced, make sure it is fresh and highly palatable. “This is no place to cut corners on quality,” said Dr. James. Excellent palatability can be achieved with either textured or pelleted starters.

The advantage of pelleted starter is consistency – each bite is like the one before. Textured starter is also acceptable as long as there’s a minimal amount of fines and separation. Forage can also be fed, but it has lower energy compared to starter (65 percent total digestible nutrients (TDN) vs. 85 percent TDN) and is best utilized when it is chopped and fed in limited amounts.

Weaning can begin at various times depending upon starter intake. Farms commonly reduce the liquid feeding to once daily for at least one week. If possible, it’s advantageous to reduce liquid feeding in several steps. Computer-controlled calf feeders have the advantage of more elaborate feeding programs where the liquid diet can be reduced in steps beginning at 4 to 5 weeks of age.“

Although it is rarely mentioned, the quality of water is very important, especially when milk replacer is fed. Poor quality water with undesirable mineral content or bacterial growth must be avoided. Test all water used in the calf program at least twice yearly and address any concerns promptly.

The entire June 8 webinar is available for playback online.  The next webinar in this series was held July 6 and can be accessed at DeLaval Calf College webinar, which covered will cover the advantages and limitations of individual and group housing systems.