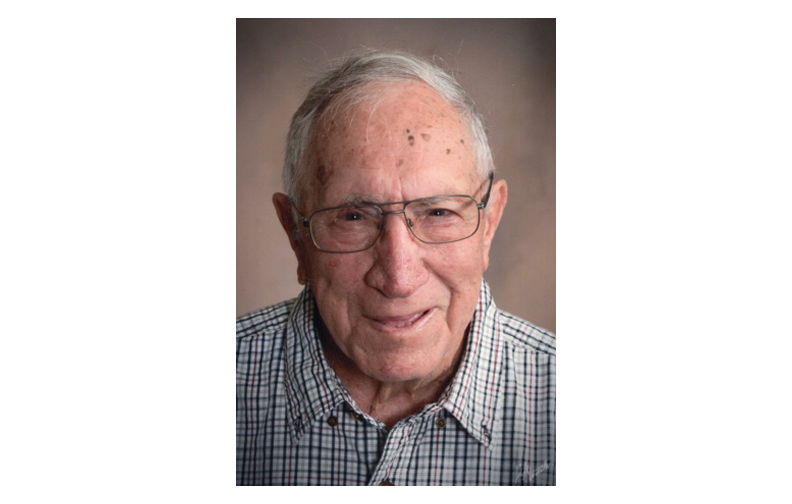 Joe Lyon, 92, of Toledo, passed away on January 22. An eminent dairy industry leader, Joe was born on November 10, 1928 in Toledo, Iowa, the third son of Earl Lyon and Helen “Nellie” Zmolek Lyon. Lyon died while convalescing from a broken hip, having only gone into assisted living in November 2020.

Joe has been called a “Dairyman’s Dairyman” active in many dairy industry organizations, including being appointed by President Ronald Reagan as the only Democrat on the inaugural Natl. Dairy Board in the early 1984.  But Joe was usually found, daily, milking his own cows.

On July 22, 1950 Joe married Norma Duffield “Duffy” Stong in the St Thomas Aquinas Church, in Ames, Iowa where he and Duffy had both just completed their university degrees.  The couple returned to Toledo to join the family farm with Joe’s dad, Earl and brother, Howard, north of Toledo.

From humble beginnings, Joe, along with his brothers, and cousins, were able to develop, from their 4-H projects, a world-renowned breeding herd of dairy cattle.  In those early days, Joe rode train cars with his show cattle across the country.  The Lyon Jerseys herd came into prominence in 1958 when they

swept the show at the Waterloo Dairy Cattle Congress, against cattle from all the prominent millionaire’s herds across the country.  Eventually, they exhibited All-American show cattle in each of three breeds.  Their efforts in producing award winning production cows and bulls in stud service led to Lyon Jerseys being honored as the American Jersey Cattle Association’s Master Breeder in 2015.  Through his life, Joe judged many cattle shows across the country, as well as internationally, from New York to greeting the Queen of England, when judging and touring her own Jersey herd.

Joe used this notoriety to embark on a lifelong passion of reforming the existing farm milk pricing system.  His advocacy was instrumental in finally getting, against all odds, “end product pricing” installed throughout the entire federal milk pricing system.  His lifetime of leadership on cooperative boards led the Iowa Institute for Cooperatives to install Joe into their Hall of Fame in 2015.

Throughout, Joe managed the growing dairy, predominantly Jerseys, a herd started in 1925 by his father, Earl L Lyon.  Joe was named an “Iowa Master Farmer” with his brother Howard, in 1983.  His Dad, Earl, had been awarded Master Farmer in 1947.   The family farm is still owned and operated by a third generation, and is now a “Century Farm,” awarded in 2017.  Joe Lyon lived nearly his entire life in the house still standing; born, raised, and started school at “Howard No. #7” country school, and then returned to live in that house with wife Duffy, raising their family, and living out their remaining days in that home on their farm.

A strong community leader, Joe spent years on the South Tama County School Board, being instrumental in balancing the books, at the same time building the new elementary school, now serving the community near the upgraded high school.

Joe often referred to himself as “The Husband of the Butter Cow Lady” being a proud supporter of his wife Duffy Lyon, who gained world renown for her nearly 50 years of sculpting the butter cow.  Recently, he was pleased to see the success of efforts to bronze her “Cow/Calf” sculpture for his hometown and at the Iowa State campus.

As a proud alumna of Iowa State University, he continued to work closely with ISU in the interest of dairyman and dairies, serving on various committees there.  He was given the Ag College “Floyd Andre” award for his efforts in 1984.  All of Joe’s nine children achieved university degrees, seven at Iowa State, two of whom “wandered off the track elsewhere” something he enjoyed reminding them of regularly.  In 2017 Joe was honored in the Iowa State University’s “Faces of Iowa” state exhibit his portrait being hung in Brunnier Museum, in the Scheman Building on the ISU campus.  He was on the board of Iowa Barn Foundation.

The family is planning a Celebration of Life at a later date. Memorials may be directed to the family for a scholarship fund.

The Iowa dairy farm that had employed the man charged with killing 20-year-old Mollie Tibbetts is now the recipient of death threats.  Yarrabee Farms — where Cristhian Bahena Rivera, the 24-year-old immigrant accused of abducting [Read More …]